Advertisement
Home / Entertainment / Richa Chadha on her new film 'Panga', acquiring fresh skill sets, and why being apolitical has never been a choice

Richa Chadha on her new film 'Panga', acquiring fresh skill sets, and why being apolitical has never been a choice 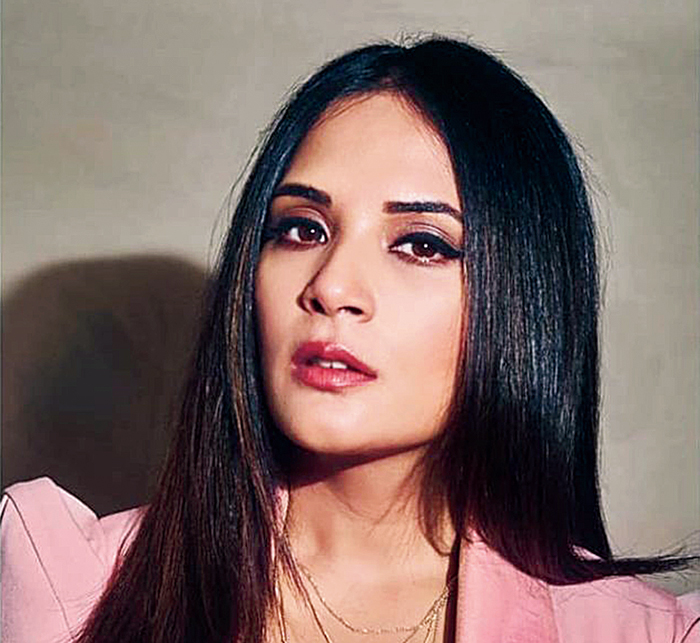 Richa Chadha has been one of Bollywood’s most vocal stars for a long time, advocating freedom of speech and stressing on the need for secularism. In the last few weeks, hers has been one of the bunch of voices from Bollywood that has spoken out against the discriminatory nature of the Citizenship Amendment Bill. With a film coming up — Panga, on January 24, in which she plays a kabaddi player and which also stars Kangana Ranaut — Richa chatted with The Telegraph on her new outing, how acquiring fresh skill sets excites her and why being apolitical has never been a choice for her.

What’s the feedback been like to the trailer of Panga and to you specifically?

Yesterday (Tuesday), a song came out and people said I look cute (smiles). I am really glad people are liking the trailer and the songs. I haven’t watched the film yet… I will probably watch it on the 21st. See, my laalach in doing this film was that I would get to learn kabaddi and work with Ashwini (Iyer Tiwary, director).

You picked up kabaddi for Panga and recently, you learnt to ride a bike and even travelled to Kazakhstan to learn a new form of dance. How important for you is it to acquire new skill sets, whether it’s needed for a film or not?

I make films but I also like having a life outside of it. I like to read, write, do photography… I like dance and music. I don’t really pursue these commercially, even though I could. I grew up in a very open household where my parents encouraged me to pursue many interests. They never told me, ‘Oh, if you are good in music that means your studies will suffer’. I was an all-rounder and I really enjoyed it.

Now, one of my skills — which is acting — pays my bills, but there are also many other skills that I want to explore for myself. I don’t want to get boxed into this Bollywood idea of how much one should do… people constantly want to limit you, you know, and my fight is against that.

Talking of Panga, how important is it for you to be part of stories about women?

It’s very important. But I feel that when even films have been full of testosterone — like Gangs of Wasseypur or Fukrey — I have stood out, and I am very proud of that. I always want to humanise my parts and make sure they say something. I think we are now in a good space where there are so many gifted filmmakers who are women… whether it’s Zoya (Akhtar), Reema (Kagti), Nitya (Mehra), Alankrita (Shrivastava), Meghna (Gulzar), Ashwiny, Konkona (Sensharma) made a beautiful film (A Death in the Gunj)… these women are amazing. They are all coming into their own like never before and telling such powerful stories. Like, now I want to do a Zoya Akhtar type of film or an Ashwiny type of film. Chhapaak was written by Meghna Gulzar and Atika Chohan… so we have women telling women’s stories. It’s a great phase to be in. And anyone who scoffs at it and says, ‘Why do you need women to tell women stories?’ my answer would be, ‘That means you are a man and you won’t get it!’ (Laughs)

Your Zarina Malik in Season 2 of Inside Edge had a crazy trajectory, going from being manipulated to being manipulative. You must have had a lot of fun playing her!

I love Zarina! I enjoyed playing her in Season 2. She went from being the righteous one in the first season to being pulled into the dark side in Season 2. I loved the transition and I think Season 3 will be even better. Maybe it will be a homecoming of sorts for Zarina where she will realise the error of her ways. Her graph is very interesting and even with her grey areas, it’s wonderful how the audience has accepted Zarina. The world is so beautifully set up that the viewer doesn’t judge Zarina for her ambition. The men are so ambitious and are pulling no punches, so why shouldn’t she?

How important is it for you to mix things up in career and in life to keep yourself interested and invested?

Totally! I want to have a full life outside. I don’t want my life to be limited between Bandra and Goregaon and to be caught up in some bubble. There’s so much more to the world. I want to explore myself as a writer…. After some point of time, you realise that what you need is agency. I am not the naive girl who debuted at 21 in Oye Lucky! (Lucky Oye!). I know what I want now and there are so many opportunities now to explore creatively. I am happy doing that one film, finishing my interviews and then becoming reclusive, going and doing my charity… I enjoy that.

Does this get misconstrued as disinterest in your career in any way?

(Pauses) I don’t think so. By now, I think people have understood that I am a little weird and whimsical (laughs). I have said things to people bluntly and without any filter and they have told me, ‘What you are saying is true and if it was said by someone else, I would be offended but I am not offended by you because I know you are coming from a place of love’. The definition of a heroine in the film industry has also changed. Gangs of Wasseypur released in 2012 and since then there has been a sea change in the number of women working behind the scenes… look at the sheer diversity of people from all parts doing all kinds of work. That’s the beauty of India, you know… the beauty of creating together.

Even before the current climate, you’ve been one of the staunchest supporters of freedom of speech and secularism. Has your activism ever come in the way of your acting?

It’s never happened to me that I’ve lost a film or a brand because of what I say or believe in politically. I anyway don’t want to be part of films where the makers will have conversations like, ‘Oh, let’s not take her because she is too much of a feminist and because she has a brain’. Maybe I am not meant for that film… I don’t do films to function as a prop. If I’ve been dropped or replaced, I don’t know and I am happy not knowing about it (laughs). But I’m quite happy with where I am.

Honestly, I come from a place of love… I am very Gandhian that way and I will not shame anyone who has a right-wing ideology and make them feel ignorant or uneducated. If they are feeling that way, we need to examine why. Actually, the approach of the world, as a whole, should be less symptomatic. If someone doesn’t agree with what you believe in, you can’t break their skulls and expect that their thinking will change. If it had to change, it would have anyway… the only thing that you have done is made a lifelong enemy by resorting to violence. I have consistently worked with people who I disagree politically with vehemently, like say, Vivek Oberoi. They are entitled to the way they think, like I am to mine. It would be undemocratic of me to say that I won’t engage with this person. At the same time, nothing that they say will make me change the way I feel. I will stand by my truth. And that’s what a democracy is all about.

I also have a problem with cancel culture. Cancel culture doesn’t leave room for dialogue. If Indians are going to be fighting Indians, it’s a failed exercise, no? It’s counterproductive.

Do you think in today’s times being apolitical is not a choice any more?

It’s no longer a choice for me. But if there are people who have not been political all their lives or who don’t understand things and choose not to speak, it’s okay. But then, I am not defending those who are saying that they don’t know the issue (CAA-NRC) well enough to comment. Well, if you are in the public eye, it won’t do you harm to read up a little or educate yourself because some people are looking at you as role models or might be looking at you for some reaction. But then at a press conference for my film Section 375, someone asked me to comment on recurring floods and stagnating GDP. I was like, ‘Hum neta nahin, abhineta hain’ (laughs).

Yes, when you ask about choice, I truly believe that the artiste is the moral conscience of society. But I know that I am able to speak up today because I don’t have liabilities amounting to hundreds of crores, I don’t have kids that I need to worry about their safety…. There are so many issues because of which people remain silent. I believe in not being silent and not being violent (laughs).

I truly feel that democracy is alive and kicking in India in the form of its citizens. A lot of people had this fear that civic society is dead, but that’s not true. Yes, civic society is concerned about its survival but it’s no longer apathetic. The nation has been galvanised into action and it would serve our regime well to listen to the people and incorporate their ideas. Yes, you want to implement CAA and NRC, then do it… just don’t discriminate on the basis of religion or the financial status of a family seeking refuge.