Advertisement
Home / Entertainment / Relationship with my work like arranged marriage, fell in love after I got into it: Rani Mukerji

Relationship with my work like arranged marriage, fell in love after I got into it: Rani Mukerji 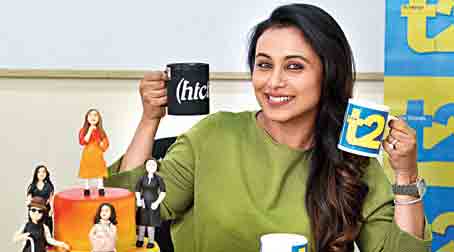 Rani Mukerji says she entered the film industry without ever wanting to be an actor but her journey turned out extremely rewarding after she started falling in love with the craft and the audience appreciation that came with it.

In her 25th year in Bollywood, Mukerji finds it impossible to not feel surreal over how far she has come. The actor made her Hindi film debut with the 1996 drama Raja Ki Aayegi Baraat, aged 18. Two years later, she burst onto the scene with superstar Aamir Khan-starrer Ghulam and the blockbuster Kuch Kuch Hota Hai, which cemented her career.

"I never wanted to be an actor. It was never a career choice that I had taken for myself. When you are young and dream of doing a particular thing in life, you start getting obsessed with it. You want to make it in that particular field because that's your passion, your first love. But my relationship with my work has been like an arranged marriage - I fell in love with it after I got into it," Mukerji told PTI in an interview.

It was her singer-mother Krishna Mukherjee, who insisted that she should start working in movies, the actor said. "Slowly, steadily I started to fall in love with the craft. Because I realised this profession needs a lot of craft. You have to have it in you to emote and bring out the emotions," she added.

Mukerji said once she realised there was an audience waiting for her work to come out, she never wanted to disappoint them. But trying "too hard" was never in her scheme of things. "When I started receiving fan mails, my audience became my family and I never wanted to let them down. To try too hard or be desperate was never in my scheme of things because I was extremely happy with what I had achieved. For someone, who didn't want to do it but has now completed 25 years, this feels like a dream," she said.

What has kept her going--and relevant--over all these years, is her ability to observe, learn and adapt to changing times, Mukerji said. "Every journey in the film industry has been a stepping stone. Collaborating with different filmmakers, co-actors, technicians... It is a learning process. With each passing year, everything keeps evolving and you have to keep up with it, be with the times, know what is relevant today," she added.

The actor said in her over two-decades-long career she has tried to learn from everybody she has worked with. "In these 25 years, I have been observant, tried to grasp and picked up things on my way. It doesn't feel like 25 years. I still feel it was just the other day when I met Shah Rukh (Khan) and Aamir (Khan) for the first time," she added.

While the actor has teamed up with some of the biggest filmmakers of the industry -- from Yash Chopra, Karan Johar to Sanjay Leela Bhansali - her recent work has seen her joining hands with new directors. Both, Mardaani 2 and the Bunty Aur Babli sequel are helmed by first-time directors Gopi Puthran and Varun V Sharma, respectively.

Mukerji said she has no apprehensions in collaborating with newer voices and encouraging emerging talents. "I always get excited with what somebody is bringing to me on the table, to hear the voice of the filmmaker through the film that has been offered to me. Then it doesn't matter if the person is a debutant director or a seasoned filmmaker. What actually speaks to me is the film," she said.

The actor said as somebody who had support in people like Shah Rukh and Aamir during her early days in the movies, she feels it is necessary to back young talent.

"I never felt a problem working with newcomers because I myself was a newcomer back in the day. I always feel if people like Shah Rukh and Aamir had refused to work with me because I was a newcomer, I don't think I would be in the industry today. Encouraging new talent is extremely important for film people to take the industry forward," she added.

Mukerji will next be seen in director Ashima Chibber's Mrs Chatterjee Vs Norway. The film is produced by Monisha Advani, Madhu Bhojwani and Nikkhil Advani's Emmay Entertainment and Zee Studios.