The actress says she makes up for it now 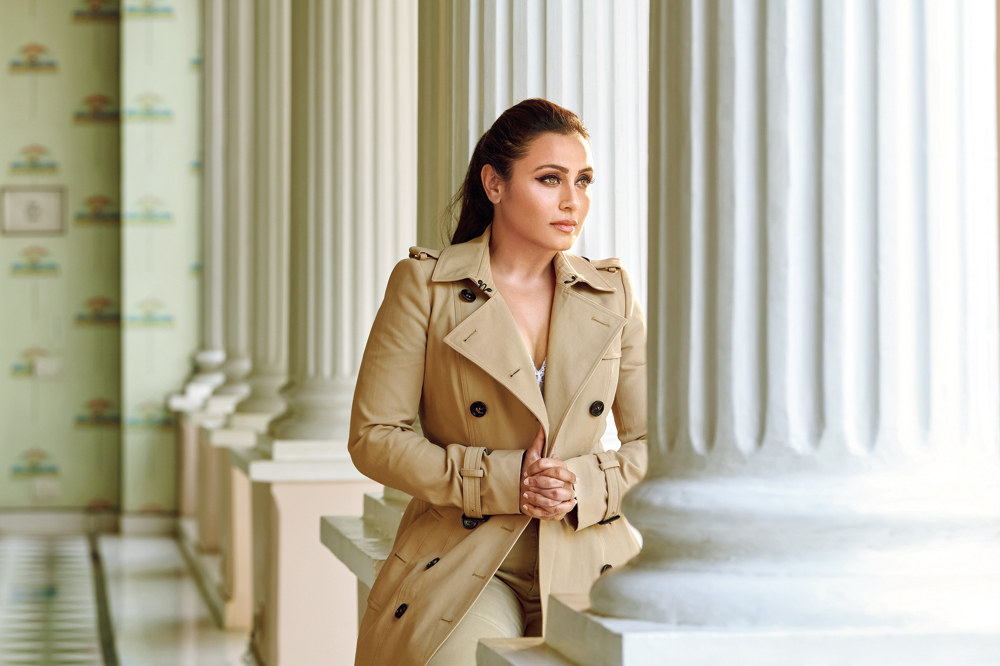 Rani Mukerji turns 42 today. The effervescent actress — who had a hit in Mardaani 2 a few months ago and has just finished shooting a portion of Bunty Aur Babli 2 — chatted with The Telegraph on her birthday plans, why Black and Bunty Aur Babli remain special to her and the India she dreams of for her daughter.

Happy birthday, Rani! What did birthdays mean to you as a kid and what do they mean to you now?

You know, throughout my childhood, I was never able to celebrate my birthdays because it would happen in the middle of my exams. My birthday time was always exam time and that made me really upset. I was never able to have a party on my birthday. And I am actually a birthday person! I love balloons, I love cakes… you know about my fondness for cake! (Laughs)

But what I missed during my childhood, I try and make it up with my daughter’s (Adira) birthday parties now. I go completely berserk on her birthday! (Laughs)

But now, my husband (Aditya Chopra) makes my birthdays very special. I have nothing to complain about. It’s probably God saying, ‘Okay, I didn’t let you celebrate your birthday all these years, so have fun now’. And so my husband makes up for all those lost birthdays.

What’s been the most memorable birthday for you recently?

It has to be last year. Adira has started understanding birthdays and she made a beautiful card for me. Also, last year I shifted into my new home and that made my birthday very special. Let’s see what Adira and her father plan for me this year (smiles). I really take care of them on their birthdays, so they better do it for me too! (Laughs)

Are you someone who makes birthday resolutions?

My resolution every year is to lose more weight! And I never end up keeping to it because I love my food. Being married to a Punjabi man who loves his food is quite a task! (Laughs) My mom makes paayesh every year on my birthday. But this year, she may not be able to because she isn’t keeping well… she had a surgery on her spine last year… and my only wish this birthday is to see her hale and hearty.

Coming to films, you’ve just wrapped up a schedule of Bunty Aur Babli 2 in Abu Dhabi. What has it been like revisiting a film you made 15 years ago?

It’s been amazing, honestly! Fifteen years ago when I played her, I thought there was something special in Vimmi. To reprise the role once more is giving me immense happiness. I am really excited for Bunty Aur Babli 2 and I am sure that when you guys see the film, you will know what I am saying… like, I can’t explain it in words.

How has it been reuniting with Saif Ali Khan with whom you made some pretty memorable films, especially Hum Tum?

Saif and I share a very great relationship. As actors, we feed off each others’ energies. We have immense respect for each other and also some great chemistry. When we perform together, it’s always very seamless and effortless. I am really enjoying working with Saif after all these years. We keep giggling on set and we only keep talking about our children… that’s the new topic of conversation between us now.

There’s young energy on set in the form of Siddhant Chaturvedi and Sharvari. What’s the difference between the newcomers of today and how you and your generation of actors were as newcomers?

I think there’s a huge difference in the way they are groomed now and the way in which we were groomed. In fact, we were never groomed… we actually only learnt by trial and error! (Laughs)

I think they are very privileged today to be getting so much help from every quarter. Everybody’s there to make sure they are doing their best and looking their best. I don’t think we had anything like that in our time. That’s the biggest difference that I can see.

Is it too early to ask if a third Mardaani film is in the works?

It’s become a franchise, all thanks to the love showered on it by the audience. The germ of Mardaani stemmed from the immense anger and pain we felt during the Nirbhaya case. Mardaani became a reality because of that one incident that shook the whole nation. Mardaani 2 happened because of the huge love that came the first film’s way, and it took forward the idea. I think ‘Mardaani 3’ will also have the germ of the first two films and will highlight what we as women face in the country today. I am sure it will rise from there. Hopefully, something will happen soon and Gopi (Puthran, the director of Mardaani 2) will come up with something equally interesting.

At this stage of your career when you pick and choose your parts sparingly, what makes you say ‘yes’ to a film?

What excites me is simply the contribution of my role to the script as a whole. I look at how my performance will finally impact the film. These are the questions I ask myself at the very outset when I am offered a film. Is it a film that I will enjoy watching and be proud of? Is it a film that my fans will be able to watch proudly in theatres with their friends and families?

Both Black and Bunty Aur Babli turn 15 this year. What are your most enduring memories on working on two of the many landmark films in your career?

Black, I would say, has been one of my most career-defining films. It changed how I looked at myself as an actor. It was a role that I challenged myself to do because I didn’t know the extent to which I could push myself to play a role like that. I kind of discovered myself as an actor through that film.

Bunty Aur Babli was a special film because of its story, I feel. It was set in rural India in 2004-05, and during that time there weren’t many big films that were being made that were set in rural India on such a big scale. Today, small-town India is very common in our films, but at that time, Bunty Aur Babli was one of its kind. It was a story of youngsters who were starting their lives with dreams in their heads and hearts… the fact that they wanted to do something in life was and is the story of every young person in India. That connected with young people, and I also feel that Rakesh (played by Abhishek Bachchan) and Vimmi were very special characters and embodied emotions that were relatable. Both Black and Bunty Aur Babli are films that are connected to me by soul.

It was International Women’s Day on March 8. As a woman with a voice and as the face of the Mardaani films, what’s your dream for the women of India?

Since I also happen to be the mother of a daughter, we want our children to grow up in a better India than what we are living in. My parents would have wanted a better India for me, so generations keep thinking about the next generation. Like my grandparents, during the freedom struggle, probably dreamt of a free India for their children. I want women to get equal opportunities without being questioned and without being asked to prove themselves every time. That ‘trying to prove’ thing has to end… we are always trying to say, ‘This should happen and that should happen because we are like this and we are like that’. We shouldn’t have to do that… it needs to happen organically. That’s the India I want to see.