Ranbir is a great guy for Alia: Mahesh Bhatt

‘Of course Alia and Ranbir are in love. You don’t need to be a genius to get that!’ — Mahesh Bhatt 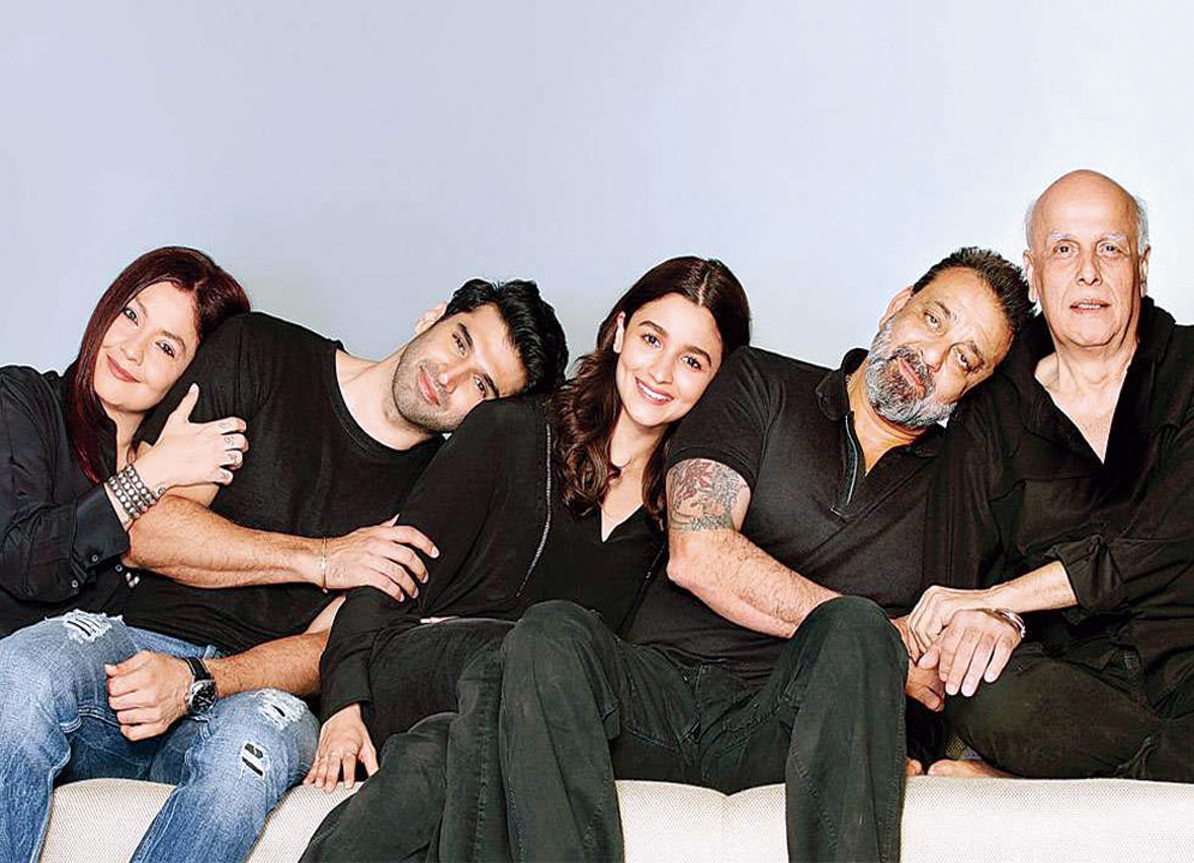 Mahesh Bhatt makes no bones about admitting the things he believes in — what he thinks of Rajkumar Hirani’s film on Sanjay Dutt, or his younger daughter’s relationship status with Ranbir Kapoor. He’s set to return to direction after two decades with Sadak 2, and it’s a good reason for t2 to catch up with the filmmaker, over tea by the poolside of The Oberoi Grand...

Sanjay Dutt was 25 then, he’s 60 now. It’s like The Godfather and The Godfather Part III… I don’t think it has ever happened here where you take a fictional character and you age him in real life. The Godfather Part III was made years later. So you’re seeing Sanjay Dutt who now is an angst-ridden, suicidal taxi driver suffering from the primal feeling of loss of his beloved. That’s the space which we have grounded the film in. It begins in the heart of a person who’s reeling in the aftershock of having lost the defining love of his life. And he’s finding the process of life and going through the motions of life with difficulty. And then how this enchanting equally damaged girl (Alia) comes into his life and how then the fireworks begin.

One day I just said, “I’m not going to direct.” It just happened. There was no plan or strategy. It was Sanjay Dutt and his post-jail stint, his angst, which he first came with during Naam (1986)… where he had this angst of being a failure to his great parents. He had shamed them through his drug addiction and he had this anguish in him. It was the same kind of anguish when he came back from jail. Though he had this feeling of everything is behind him, he had walked into the world deconstructed of the fairytale that he had thought he’d get away with for 20 odd years ago. Finally when he got the rap, he felt like an ordinary mortal.

Did you watch Sanju?

I did. I loved Ranbir (Kapoor) but that’s not the Sanjay Dutt that I know. Ranbir brought his own emotional chord to it but I don’t think Rajkumar (Hirani) was claiming to the world that he’s making an exact replica. People who are very close to Sanjay cannot connect with that portrayal in the movie. But India seems to have loved it… almost Rs 600 crore is not an ordinary figure.

You’re directing both your daughters Pooja and Alia in Sadak 2. Are you excited or nervous?

I’m scared. I think Alia is a brilliant talent and not because she has achieved so much. She was not approached with this film to do it. I just wanted her to hear the script with my writer friend and me. When she heard it, she was overwhelmed by it and said ‘I want to do this film.’ I found her response so emotionally sound. It became a compass for me.

Pooja has been sharing recce pictures of Sadak 2 from Uttarakhand on her Instagram. How’s the prep going?

Srijit Mukherji asked me the same question recently and I said, “Scary.” I come from those times in the ’90s where we would be taken to an available location and we would shoot. This word ‘recce’ comes from this privileged space now where there’s abundance and there’s money available to the industry itself. I never did remote control direction once I gave up direction. I’d give my feedback and monitor the narrative at the writing stage and then step into the editing stage. Otherwise it was done by the director who was assigned the task of directing. When I went there, I discovered that the problem this time is excess... there’s just so much! You have the tyranny of choice. If you’re a book junkie and you go to a bookshop with the best books stacked up for levels and levels, it kind of stresses you out because your appetite is enormous.

You played an important character in Sanjoy Nag’s Yours Truly but it’s just one scene. What made you say yes to that cameo?

It was such a gift. My wife at the age of 60 gets the role of a lifetime which even I’ve not been able to give her because I’m making a living within the stranglehold of the commercial diktats of popular mainstream cinema. Even my so-called movies that had accommodated the alternative narrative couldn’t accommodate a woman with her talent. She’s an extremely talented actor. When she told me that she has got a role where she’s playing the lead, I said, “How lucky you are saying this to me the way you’re saying!” Just when she thought that everything is sorted out — she’s got a home, she has a daughter who’s a star… she was basking in that when Sanjoy made this call to me. I said it’d be a privilege to be a part of this. What more do I want but to be part of a document like this that my children will see.

As the lead character Mithi Kumar, your wife Soni Razdan looks very different than she is in real life…

Sanjoy shot with me on the last day of the shoot. When I came here to Calcutta and met her in The Oberoi Grand, she looked different and felt different. She didn’t even know that she had stepped into the skin of that character. When she packed up, she wore her clothes to go home, she had become herself. I could see her walk in and walk out that character. I called the movie, much to Sanjoy’s embarrassment, a gem and a masterpiece. In this attention- deficit age where everyone is frantically trying to make an impact, comes a movie that dares to say, “This is what I am”. It’s like a breeze that blows through your backyard on a summer afternoon and rustles the leaves. I was awestruck by this film.

What was Alia’s reaction after watching Yours Truly?

Now Alia is being raved about as an actor who has arrived at the age of 24 in the Bollywood landscape as “the actor”. I wanted Alia to watch it because I thought that she must learn that she is miles away from what her mother has touched. Of course a lot of things come with age and with life which cannot be appropriated through your acting skills. I was very interested to see what she feels. She’s a young mind, she’s the mind of India of today. She wouldn’t patronise her mother’s performance or the film if she did not like it. Our relationship is very sound and goes much beyond what we create or can achieve in the world of the arts. The moment the lights came on, I turned back and saw she was visibly moved. She was also shocked to see her father. Sanjoy, at first, wanted me to wear a belt and then shoes. And then he gave me a watch and a bag. It was a very refreshing experience. I remember it was a Sunday morning.

How was it being directed?

Unsure. Scared. You get the feeling that what you’ve been asked to do is bigger than you. Otherwise you so want to be in control of what you’re doing.

You’ve directed Soni in films like Saransh, Sadak… how was it like for you to direct her?

I was very impatient with her. That’s what she says. You expect that from someone who’s so intimate with you. A thought occurs to you, “Come on don’t make me explain it to you. I can explain it to others, not to you.” We did a film together called Swayam (1991) where she played Waheeda Rehman’s daughter. Waheedaji used to tell me, “Why are you shouting at her?” I used to be very patient and easy when I explain it to someone else but when I pan to her I’m a completely different person.

Does that apply to other family members too, like Pooja, whom you’ve directed in films like Daddy, Dil Hai Ke Manta Nahin?

Which are your favourite Alia films?

I think she was stunning in Raazi. Udta Punjab is an obvious choice because of the character. It was remarkable because a Juhu girl brought up in an affluent environment like ours plays an adivasi girl of Chhatisgarh… when I went to Ranchi, a tribal woman came up to me and said, “Your daughter speaks our language, just the way we speak”. That was more important than all the critique that was given to her by all the newspapers. That simple woman was there in a handicrafts exhibition. That for me was the finest compliment that she could’ve got.

What’s the best advice you’ve given to Alia so far?

I have refrained from giving advice to my children because from the time you’re born, advice is all that they get! I did not listen to any advice when it was given to me. Here, at 70, the way I am is because I dared to walk my path. I can’t but allow them to live their life the way I have lived it. I respect their intelligence. If they fall, they’ll get up and walk on their own.

There’s a lot of buzz about Alia and Ranbir’s relationship. What do you think of Ranbir?

Well, of course they’re in love. You don’t need to be a genius to get that! I love Ranbir… he’s a great guy. What they do to their relationship is something they’ll have to figure out. Whether it’s heading towards that port called ‘marriage’ — which is an institution that needs to be questioned in the second decade of the 21st century — is something for them to figure out. I’m no one to hazard a guess when that would happen or which way the relationship is going. It’s life and life needs to be lived on its own terms. Let’s wait and see what tomorrow brings for us!

Alia Bhatt cheers for mom Soni Razdan in Yours Truly