Advertisement
Home / Entertainment / Post-wedding, it's all about Kapoor royalty

Post-wedding, it's all about Kapoor royalty 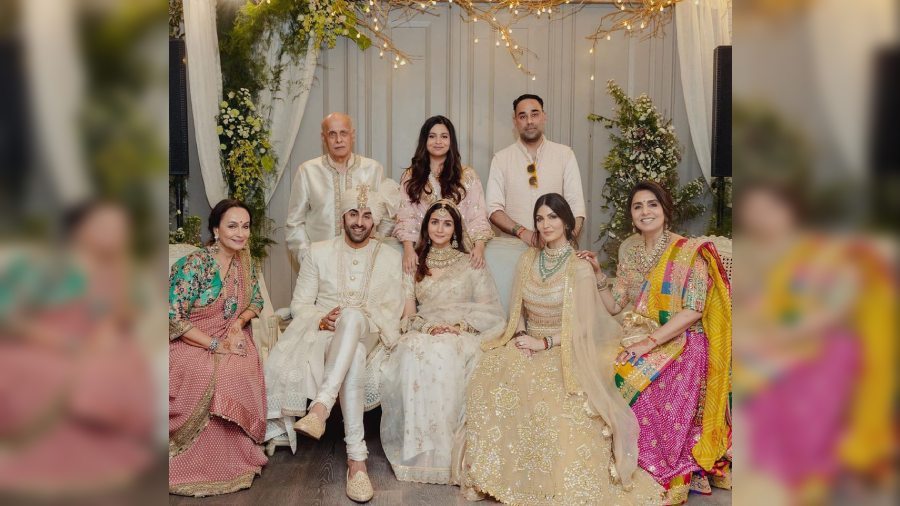 Bollywood A-listers Alia Bhatt and Ranbir Kapoor got married on Thursday - it was not a big fat Indian wedding spangled with tinsel as many would have imagined, but at their Bandra apartment with just family and close friends in attendance.

Now guess what both Rabir's exes Katrina Kaif and Deepika Pdukone wished the two on the special occasion. Katrina married to Vickey Kausal put all speculations of her estranged frienship with Alia to rest with her wishes.

Coming back to the revelry, speaking to media personnel outside Vastu hours after Ranbir and Alia's wedding, Neetu Kapoor and Riddhima Kapoor Sahni confirmed there is no wedding reception planned. Speaking in Hindi, Neetu said, "It's done, it's all done," before adding, "Now you all go and sleep peacefully."

Alia, 29, posted a series of loved-up pictures with Ranbir, 39, on Instagram post the wedding to announce that they had tied the knot in their balcony after dating for five years.

"Today, surrounded by our family and friends, at home... in our favourite spot - the balcony we've spent the last 5 years of our relationship - we got married. With so much already behind us, we can't wait to build more memories together... memories that are full of love, laughter, comfortable silences, movie nights, silly fights, wine delights and Chinese bites.

"Thank you for all the love and light during this very momentous time in our lives. It has made this moment all the more special," the caption by Ranbir and Alia, read.

Alia and Ranbir matched the colour of their wedding outfits in ivory, styled by Bollywood's go-to wedding designer Sabyasachi Mukherjee.

According to the Instagram page of the brand 'Sabyasachi', Alia wore a hand dyed ivory organza sari embroidered with fine tilla work and an embroidered hand-woven tissue veil. The bride paired the trousseau with Sabyasachi Heritage Jewellery, which featured uncut diamonds and hand strung pearls.

After keeping the media personnel and fans stationed outside 'Vastu' waiting, the couple arrived for the much promised photo op at around 7.40 pm.

The couple arrived walking hand-in-hand to the beats of drums and greeted the media and waiting fans with folded hands. As they posed for pictures, Ranbir lifted Alia in his arms and walked back to the building as fans broke into a cheerful applause.

The wedding festivities were a tight-knit affair with the media stationed outside getting morsels of information about what was going inside till Alia finally shared the pictures from the wedding on social media.

Ranbir does not have an official social media account.

Media and those waiting outside were treated to 'laddoos' and sweets post the wedding earlier in the evening. 'Dholaks' were heard too, perhaps the only concession to the otherwise understated affair.

Boxes of snacks were also distributed among the media personnel, who had been keeping vigil outside.

Given that both Ranbir, Raj Kapoor's grandson and a scion of the first family of Bollywood, and Alia, daughter of filmmaker Mahesh Bhatt, are from Bollywood families, the star presence was a given, and kept the cameras whirring.

Among those who came in were Ranbir's mother Neetu Kapoor, sister Ridhima Kapoor and her family, cousins, actors Kareena Kapoor Khan, Karisma Kapoor, as well as Aadar and Armaan Jain along with their mother Rima Jain, and uncle Randhir Kapoor.

Soon after Alia made the wedding Internet official, family members such as her mother and mother-in-law started sharing celebratory posts on their verified accounts.

Razdan shared a brief emotional note as she welcomed Ranbir to the family.

"They say you lose a daughter when you gain a son. I say we gain a wonderful son, a lovely warm family and my darling beautiful baby girl is right here with us always," she wrote alongside the pictures of the newlyweds.

"Ranbir and Alia here's wishing you so much love, light and happiness in your journey together," she added.

"My world", wrote Neetu Kapoor in the caption of the seven photos.

Kareena shared one of the pictures of the couple on her Instagram Stories, captioning it as: "Our hearts are full. Welcome to the family my dear Alia." The entire stretch from 'Vastu' to the under-construction Krishna Raj building where the couple is expected to live was strung with lights from trees. The two properties are just about 180 m away from each other.

The wedding caps a hectic week for reporters and photographers tasked with covering the endlessly discussed star wedding as the last several days were akin to piecing together a jigsaw - white curtains used as screens on windows, Sabyasachi branded bags going in, stray comments from family and studied silence from Alia and Ranbir.

A glimpse inside the regal ceremony of Alia-Ranbir's wedding