Parambrata Chattopadhyay: ‘Soumitra Chatterjee was very happy with my approach in Abhijaan’

As the director of Soumitra’s biopic, Parambrata reflected on the film and its hero ahead of Abhijaan’s UK premiere, hosted by Bengal Heritage Foundation 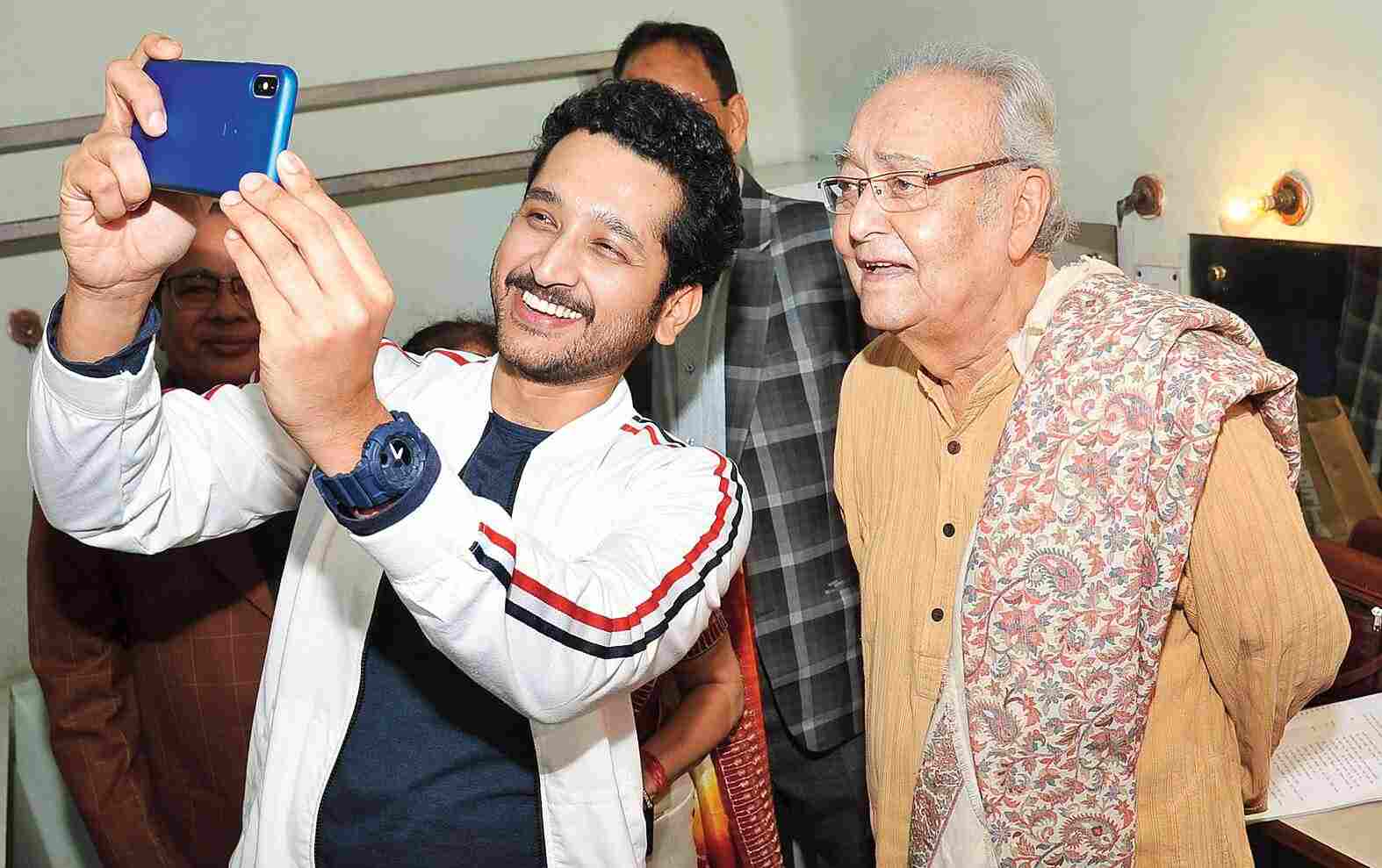 Meta narratives that mimic reality are rare in Bengali cinema. Rarer still are those that adopt this approach for a biopic of an icon. With Abhijaan, Parambrata Chattopadhyay has done both – making a film about the late Soumitra Chatterjee where the story also revolves around making a film on the man whose accomplishments as an actor and statesman will live long in the memory.

Ahead of the UK premiere of Abhijaan on July 3, Parambrata caught up with the Bengali diaspora in London in an event organised at the Sohowala Cinema, Courthouse Hotel London, by the Bengal Heritage Foundation (BHF), partnered by UKDC and Radio Bangla Net. Speaking up close and personal with the audience who had gathered to watch Abhijaan, Parambrata revealed a number of details about the process of making the film that turned out to be among Soumitra’s last, besides sharing anecdotes about the man himself.

Soumitra always put his craft above everything else, said Parambrata.
TT Archives

‘Soumitra kaku was “very happy” with my approach’

“I didn’t come up with the idea of making the film. It was Ratnashree Nirman (one of the two production companies involved in the film alongside Roadshow Films) that came to me with the idea. I told them I want to do the film through a particular lens, and if that lens can’t be incorporated, then I’m not the person to take this up,” said Parambrata. After Ratnashree Nirman agreed to document Soumitra’s life through Parambrata’s “lens”, it was time to convince the veteran actor, who was “very happy” with the approach chosen and consented immediately.

Research for the film involved Parambrata heading over to Soumitra’s residence twice or thrice a week to chat for a few hours in the evening, similar to what Paramabrata’s character, Dr Sanjay Sen, does in the film. “In reality, our conversations were much more informal than what you see in the movie,” observed Parambrata. It was these discussions that formed the basis of understanding Soumitra the artist as well as Soumitra the man.

“Abhijaan tries to capture what is most touching about Soumitra Chatterjee’s personality. In the film, my character tests him, asks him questions about how he has led his life, which leads to profound as well as vulnerable moments,” said Paramabrata, who was initially sceptical about whether Soumitra would be comfortable shooting the scene where he is forced to reckon with his actions and identity. “To my surprise, he said it was the best part of the film. That’s the grace of the man, which also helped bring out the creative epiphanies in the film.”

Talking about the challenges of filming with Soumitra, Parambrata confessed it was difficult to “make do with only four-and-a-half hours of shooting every day. I’d try to request him to do six hours, and he’d even agree over drinks in the evening, but come next morning, he’d be done by four or four-and-a-half, which was also understandable given his age.”

On the aspect of casting and why it was Jisshu Sengupta who was chosen to portray the younger Soumitra in the film, Parambrata said, “It was always going to be between me and Jisshu. Soumitra kaku initially said he wanted me to do it, but then I told him that with all the responsibility of direction and getting the sets in place for the period shots from the past, it wasn’t possible for me to play that role. And then we went with Jisshu because Soumitra kaku said that one must consider how obviously handsome a young Soumitra has to be! There’s no doubt that he was very fond of how he looked,” chuckled Parambrata.

‘He was loyal to his core till the very end’

In the concluding part of the discussion, Parambrata took a moment to assess Soumitra’s legacy and what made him an outlier in the creative field: “I’m blessed to have spent the amount of time I did with him and not just for this film. Over the years, I’ve come to realise that for him his well-being was about his poetry, about painting, about reading a good piece of literature or being satisfied with his theatre rehearsals. As an artist and more so as a star, your life often becomes about the number of security guards tailing you, your makeup, and increasingly, your reels on Instagram. But he always knew that his life was about his craft, and not about the glam, the fame and the frills. He was loyal to his core till the very end.”

Parambrata wrapped up the chat by talking about some of his industry favourites, citing Srijit Mukherji and Kaushik Ganguly as his favourite directors to work with in Bengali cinema and mentioning Nikhil Advani and Anvita Dutt Guptan as the ones he has enjoyed working with the most in Bollywood.

Speaking about Bengali cinema in the UK, Suranjan Som, the president of the Bengal Heritage Foundation, said: “At present, there are two major problems affecting the ubiquity of Bengali films in the UK. The first is the size of an audience that will regularly turn up for Bengali films. And second is the affordable availability of quality films that will pull that audience. It's a classic chicken and egg problem. As Bengal Heritage Foundation, we are trying to address the latter first and hope that we will be able to create a virtuous cycle by collaborating with leading filmmakers like Parambrata, production houses and central screening venues.”