Her biggest ace was that apart from sensual moves, she gave equal importance to expressions 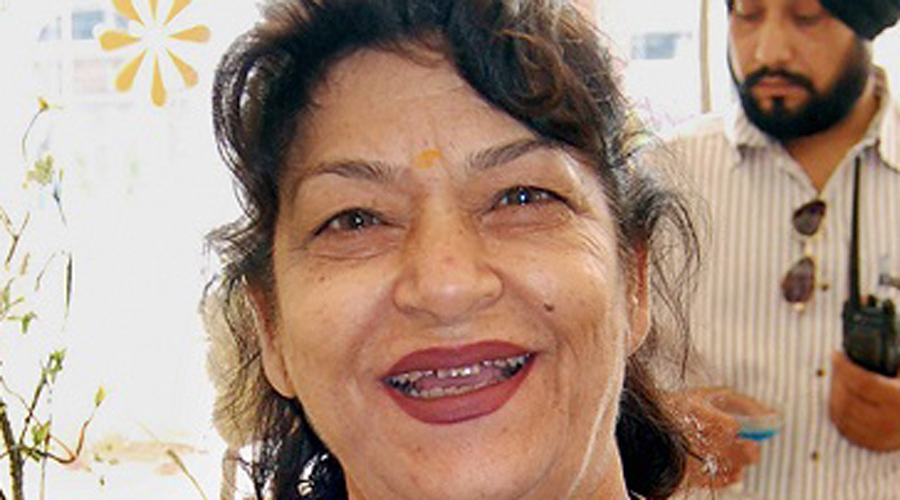 When Shah Rukh Khan and Rahul Rawail came out of the premiere of Khalnayak, the actor asked his director, “Did you notice that signature movement of Chane ke khet mein in Choli ke peechhe?”

“I had caught it,” chuckled Rawail, who directed Anjaam, the Shah Rukh-Madhuri Dixit starrer in which Saroj Khan had choreographed the iconic dance number, Chane ke khet mein. With her hips thrust out, arms raised and thumbs pointing out, that signature movement had outlived the film. “It was repeated just very fleetingly in Choli ke peechhe,” Rawail pointed out.

Nobody but the hero and the director had perhaps caught it as all eyes were on Madhuri’s choli. Saroj specialised in making Madhuri and Sridevi heave their bosoms just enough to exude sensuality without descending into obscenity. Whether Madhuri’s unforgettable Dhak dhak in an orange sari, a number that was added after Beta was filmed and ready, or Sri dripping sensuality in a blue sari in Kaatey nahin kat-te in Mr India, which was Shekhar Kapur accepting Boney Kapoor’s challenge to present the actress more seductively than Feroz Khan had done with her in Har kisi ko nahin milta in Jaanbaaz, they were all Saroj Khan’s triumphs.

“She was gifted and very quick with her choreography,” noted Rawail. “If you wanted a few changes, she did them on the spot.” And filming that famous Chane ke khet mein dance had posed no challenge because “Madhuri would go to Saroj Khan’s rehearsal room days earlier and be prepared when she came on the set”.

Saroj Khan’s biggest ace — and perhaps what made Madhuri and Sri insist on her — was that apart from sensual moves, she gave equal importance to expressions.

“When Preity Zinta was working on her first film, Kya Kehna, Sarojji would keep yelling, ‘Ae ladki, expressions pe dhyan de’. She was the only choreographer to place emphasis on facial expressions,” recalled producer Ramesh Taurani, for whom Saroj choreographed  Kya Kehna, Soldier, Kunwara and Kachche Dhaage. “When we did Soldier, Preity started going for rehearsals. So when shooting, the feet would move automatically and Preity could concentrate on her facial expressions.”

“Sarojji would enact every expression for Sridevi and Madhuri. If one could replicate even 80 per cent, the song would shoot to a level of 300 per cent,” endorsed actor Sanjay Kapoor, whose first shot was overseen by her when she choreographed Aati nahin for his debut film Prem. Sanjay knew her as part of the producer’s family of Prem and Mr India, as the hero who danced to her whistle in Beqabu and Kartavya, and as Madhuri’s co-star in runaway dance numbers like Akhiyan milaoon kabhi and Nazrein mili in Raja.

“When we were filming numbers like Akhiyan milaoon, where the spotlight was on Madhuri and me, I had a pact with Sarojji,” Sanjay disclosed. “The steps had to be synchronised and Madhuri would pick up the moves in a second. So I would go to Sarojji, rehearse my steps for the day from 6.30 to 8.30am, go home, shower and report for shooting. Sarojji stuck by our pact and would shoot only those shots that I had rehearsed for,” he grinned.

Sanjay further said, “When Sridevi was doing Mr India, those days she and Madhuri were doing something like 25 films each. They’d both insist on Sarojji and she was so busy that it was perhaps the only time when shooting would be fixed as per the choreographer’s availability. Actresses would work their dates around her availability. Unlike today, when choreographers are asked to shoot on given dates, when we shot Mohabbat in Canada for three weeks, song picturisations were firmed only when Sarojji was available.”

For someone whose career revolved around making stars stay nimble and on their toes, Saroj Khan unfortunately had diabetes and weight issues, leading to her cardiac arrest. RIP Saroj Khan.

Ace choreographer Saroj Khan passes on, we pick her most memorable numbers