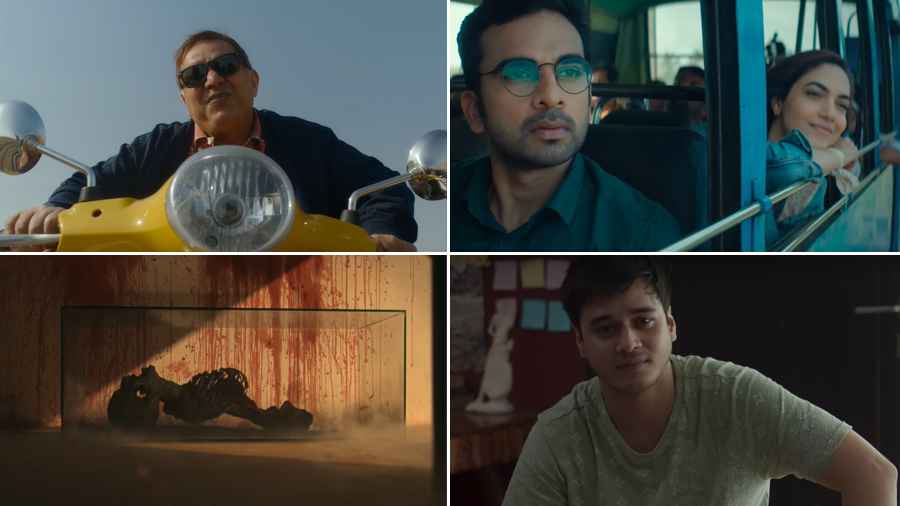 The trailer of the upcoming comedy drama Nazarandaaz has been unveiled by T-Series. Directed by Vikrant Deshmukh, the film has Kumud Mishra, Divya Dutta and Abhishek Banerjee in lead roles.

The three-minute-long trailer gives the impression of a heartwarming comedy. It shows an upbeat blind man (Kumud Mishra) setting out for an epic road adventure with his two trusted aides.

Nazarandaaz will hit the theatres on October 7.

The almost one-minute-long teaser shows Ashok Selvan in three different relationships with three different women. The music of the film is composed by Gopi Sundar. The movie is shot simultaneously in Telugu and Tamil languages.

Nitham oru Vaanam will arrive in cinemas in November.

The short teaser gives us a glimpse of otherworldly creatures and futuristic robots as everything goes haywire in a montage of pure chaos. The series is created by Yeon Sang-ho based on his own webtoon (South Korean digital comics) of the same name.

Lionsgate Play has unveiled the trailer for the second season of its hit comedy-drama Feels Like Home. The series features Anshuman Malhotra, Mihir Ahuja, Preet Kammani and Vishnu Kaushal in lead roles alongside Himika Bose and Inayat Sood.

The trailer shows how betrayal and complex love lives take their toll on friendship as the brothers/ flatmates try to figure out their lives in their early 20s. The series is created and produced by Sidhanta Mathur under the banner of Writeous Studios.

Feels Like Home Season 2 will be streaming on Lionsgate Play from October 7.