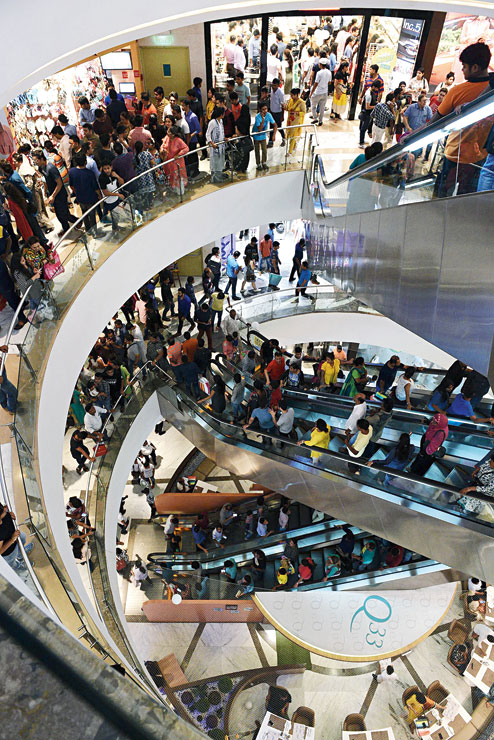 It was pouring discounts and footfalls at midnight sale @ Quest. Only t2 was there

Madness. Shopping. Queue. Or, Midnight Sale @ Quest. Saturday, June 17. The third edition of MSQ saw more than 100 participating stores draw around 2,60,000 people from all parts of the city to make the most of the night-long mega event — discounts of up to 50 per cent on many fashion and luxury brands, prompting buy-buy worth Rs 7.66 crore! Though the memo marked the official sale hours as 10.30pm-2am, the sale began early at a few outlets and many bleary-eyed shops remained open as shoppers formed serpentine queues at the billing counters way past closing time.

The Syed Amir Ali Avenue mall also saw shoppers fuelling up at the packed food court that too was open till late. “Midnight Sale @ Quest is getting bigger and better with every year.  Not only does it offer value for money, the whole experience of being there during the sale is electrifying. The brands offering discounts are huge and the range is varied. This year we saw more footfall and we are very happy with the turnout. MSQ is becoming an event  that Calcuttans are looking forward to,” said Sanjiv Goenka, whose RP-Sanjiv Goenka Group has developed the mall.

What the sellers said...

So, what is the MSQ mantra? “We wanted to give a signature event to Calcutta that would be iconic. And with the footfall increasing every year we can only say that we are meeting the expectations of the people. Our prime focus is to make the people happy where they can come with their family or friends and enjoy. We also made a traffic plan well in advance with the help of cops who were very helpful,” said Dilip Sen, MD, Quest Properties India Ltd.

And what was the one surprise element of #MSQ17? “The one thing that surprised me this year are the people of Calcutta and the patrons of Quest... they broke all the records and raised the bar once again,” said Sanjeev Mehra, VP, Quest Properties India Ltd.

Michael Kors: “We had up to 50 per cent discount on handbags, slings and wallets and it generated sales worth
Rs 30 lakh. Our bestsellers were Chain totes and Selma’s,” said store manager Sahil Kapoor. MSQ footfall? 600!
Little Shop: “We had a flat 50 per cent off on shoes and garments and we made close to Rs 7,50,000 during the sale which makes it the highest sale we’ve ever done during MSQ,” said owner Shiv Daswani.

Steve Madden: “Unlike the previous years this is the first time we had over 80 per cent of the products on discount,” said Saunak Sarkar, store manager. Total sale? Around Rs 13 lakh. Pop pick? Abbena heels worth Rs 11,000.

ONLY: With a “flat 50 per cent off” on everything, the store raked in Rs 15.6 lakh and even had people at the billing counter past 2am. Closing time? 2.45am.

AEROPOSTALE: This first-time participant offered a flat 50 per cent off on everything, clocking sales of Rs 8.5 lakh.

With a special preview comprising the collections of four designers — Rohit Gandhi + Rahul Khanna, Pankaj & Nidhi, Nupur Kanoi and Namrata Joshipura — and exciting offers at hand, The Loft was a packed affair from Saturday afternoon. The sale at the multi-utility space on the 6th floor of Quest started at 3pm and while Nupur Kanoi was the clear favourite, the collections by the other three designers also found a lot of takers. “This was the first time in 10 years that I offered my collection on sale in Calcutta and the response was overwhelming. The space at The Loft gave us the opportunity to showcase the collection wonderfully. We got a lot of first-time shoppers this time as well,” said Nupur after the sale got over.

“We teamed up with Quest and had a midnight sale at The Loft for the first time. We selected four designers to participate, as we wanted to bring some new names into this mix. The sale went off very well, it was very encouraging... we were very pleased with the response and we wish to continue this event next time also with more designers!” said Shivika Goenka, vice president, special projects, Quest.

Shah Sajjad Ali (right) was declared the winner of “If you don’t have an iPhone you don’t have an iPhone” contest. With 32 participants, the school student’s picture that was posted on the Facebook page of Quest had the highest like (71), helping him bag an iPhone 7 Plus. “The first thing I did after getting the phone was to check out the Portrait mode of the camera that I already love,” said the student of St. Michael’s Academy.

The other activities organised by MSQ 2017 were Inflated Balloon and Countdown Timer.

On offer: Up to 60 per cent discount on best pieces from all her collections since 2015.
Bestsellers: The western wear collection.

Having heard about the sale from her aunt who is a mall employee, Ankita Maitra paid a visit to The Loft with her cousin sister. “I picked up a kurta for Rs 6,000, thanks to a discount of 50 per cent,” said Ankita, a businesswoman.

Pankaj & Nidhi
On offer: Up to 50 per cent off on their autumn-winter 2016 collection, offered on sale for the first time Bestsellers: The dresses.

Proudly flaunting her shopping bag, Pratibha Sipani was happy to pose for the t2 camera. “I picked up a draped top from Pankaj & Nidhi as it had a great discount. I have always loved their stuff,” she said, before shopping some  more at MSQ.

Namrata Joshipura
On offer: Up to 50 per cent off on her spring-summer 2017 and autumn-winter 2016 collections.
Bestselles: Tunics and tops.

Rishika Todi, 17, picked up a tan Indo-western top. “Joshipura’s collection is easily the best here and I was happy to pick up this top,” said the teenager who was seen picking the top out with her mom.

On offer: A discount of up to 40 per cent on clothing items drawn from different collections.
Bestsellers: Western wear.

Vishakha Agarwal, 24, a fund manager working in Paris, was visiting The Loft with friend Samiksha Sultania (left). Her target? Indo-western outfits for formal occasions. “This discount was perfect as I did not want to shell out a lot of money,” said Vishakha. The duo picked up an Indo-western outfit each from the designer that cost
Rs 10,000 each after discount.