Stranger Things has always been a goldmine of pop-cultural references and influences. Season 4 gives a hat-tip to many. The Telegraph spotlights a few... 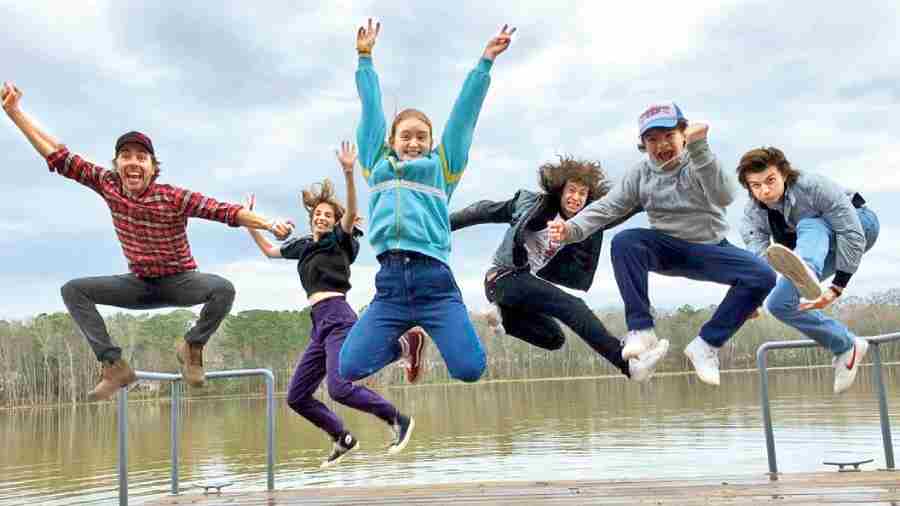 While ET, It, The Thing, The Goonies and Ghostbusters still form the root of the much-loved show that meshes the genres of science fiction, horror, drama and thrill, Vol 1 of Season 4 of Stranger Things — with seven episodes released so far, and the last two arriving on July 1 — is bursting at the seams with many a pop-culture reference of the 1970s and ’80s. In a behind-the-scenes moment shared during the ideation stage of this season, the Duffer Brothers — the show’s creators — shared a peek into a whiteboard with a few names that they describe as “the DNA that makes up season four”. Karate Kid, Edward Scissorhands, The Descent and Forrest Gump feature on that list.

A Nightmare On Elm Street

Robert Englund as Freddy Krueger in A Nightmare on Elm Street

Inarguably the biggest influence this season has been Wes Craven’s landmark 1984 horror hit A Nightmare on Elm Street. Not only does the chief tormenter Freddy Krueger have the power — much like Vecna, the monster in Stranger Things this season — to enter peoples’ minds and kill them, Robert Englund, who played Krueger in the film, shows as up as the older Victor Creel in Stranger Things 4.

Chrissy’s (Grace Van Dien) death in S04E01 is a direct homage to Tina’s (Amanda Wyss) in A Nightmare on Elm Street, with both being flung to the ceiling before they meet a similar gruesome end.

Vecna, who the creators have said is more prosthetics than computer graphics, with seven-and-a-half hours spent on the make-up chair to transform into a walking fleshy-skeleton man, with vines crawling all over his body and no nose, looks a lot like Freddy Krueger, right down to his left claw.

While the ’80s are definitely the predominant influence, the Duffer brothers have admitted that Game of Thrones remains a strong reference for them, with the duo describing Season 4 as their “Game of Thrones season”. That Vecna bears a strong resemblance to GoT’s  supernatural villain Night King is no surprise —  the pair even share the same prosthetic make-up artist Barrie Gower.

There’s also a standee of Freddy at Family Video, where Steve (Joe Keery) and Robin (Maya Hawke) work. More on that later.

Similar plot points aside, the house in The Amityville Horror (left) and the Creel House in Stranger Things 4 bear a striking resemblance

Victor Creel spending decades in prison after being charged with killing his family in cold blood is a direct reference to the real-life Amityville massacre, in which Ronald DeFeo Jr. shot and killed six members of his family in the suburban neighbourhood of Amityville, in Long Island, New York. That was adapted into the bone-chilling 1979 film named The Amityville Horror. The design of the house in the film and that of the house that the Creels move into in Stranger Things 4 is uncannily similar.

On an aside, the shot of a young Victor Creel staring at the door while his children lie lifeless on the floor (inset) brings to mind that seared-in-the-subconscious murder of the Grady Twins in The Shining, Stanley Kubrick’s seminal horror film based on the eponymous Stephen King novel. That Stephen King himself is a huge influence on the Stranger Things universe has by now been well established.

Another major Stephen King influence in S4 is Carrie. The story of a young girl with telekinetic abilities being mercilessly bullied by her peers finds a direct connection in the scenes where Eleven/ Jane (Millie Bobby Brown) is intimidated by the school bullies. It ends up with a glass of chocolate milkshake being emptied on Eleven. Infinitely better than the bucket of pig’s blood that Carrie had to endure in the 1976 film.

Running up that hill

Kate Bush in Running Up That Hill

Kate Bush’s 1985 classic Running Up That Hill, which functions as a pivotal plot device in Season 4, literally keeps Max (Sadie Sink) alive and away from Vecna’s claws. Just days after S4 premiered, Running Up That Hill shot to the No. 1 spot on iTunes and represented a jump of more than 8,000 per cent in terms of overall streams. Airplay also saw a bump of nearly 330 per cent as listeners for the song went from 41,000 to over 422,000 in a week!

It’s apparently rare for Bush, who is pretty reclusive, to approve the use of her songs on films and TV, but that she is a fan of Stranger Things clinched the deal.

Family Video, an American online video rental chain serving the United States and Canada, that was big in the VHS era and only shut shop this year, figures prominently in Season 4, with Steve and Robin working at a Family Video rental outlet. Reason enough for the Duffer Brothers to pack in references of some of their favourite films.

Family Video is well stocked with the classics of its era, from the early Tom Hanks flick The Man With One Red Shoe, to schlock-horror Basket Case, and with prominent displays for rental mainstays like Gremlins, Raiders of the Lost Ark and National Lampoon’s European Vacation. There is also mention of Doctor Zhivago and Fast Times at Ridgemont High in a particularly animated conversation between Steve and Robin.

A moment from WarGames

Any TV show or film set in the 1980s that focuses on a Russian threat thwarted by teenagers, much like Stranger Things, is bound to be likened to the 1983 hit WarGames, starring Matthew Broderick. The Duffer brothers take it a step further in S04E05 when Will (Noah Schnapp), Mike (Finn Wolfhard) and Jonathan (Charlie Heaton) call a mysterious number and realise it’s a computer. Not only do they mention the name WarGames, a bit of the musical score of the film is added in the background.

Dustin and Co. using bedsheets to forge a rope and pull in the gang stuck in the Upside Down is a direct nod to a similar moment in Poltergeist where a similar ‘rope’ is used to connect the living realm to the dead realm.