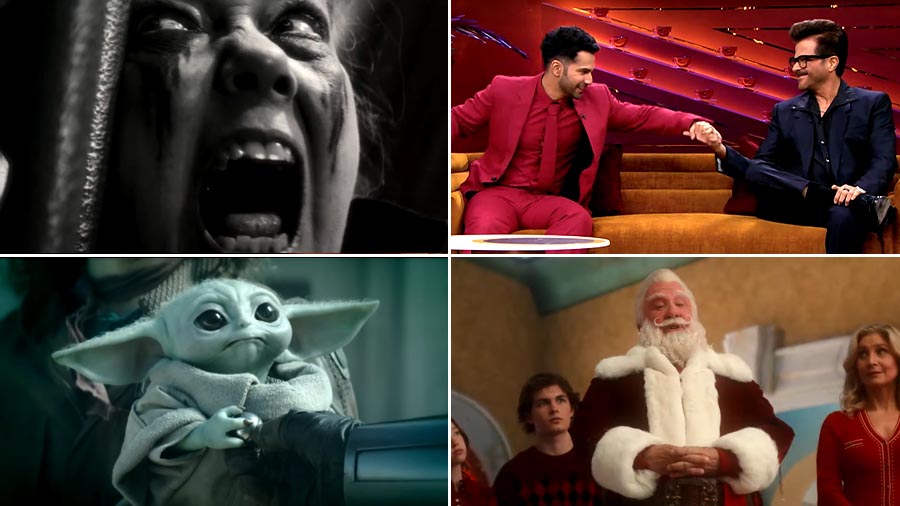 Marvel Studios has dropped the trailer of its Halloween special Werewolf By Night, starring Gael García Bernal as a lycanthropic hero. The new trailer presents a black-and-white spectacle, unlike anything Marvel has created so far.

The one-minute-25-second-long trailer is filled with monsters and demons. Presented like an old-school hammer horror film, the trailer features a gathering of unusual suspects, one of whom is the Werewolf by Night himself.

Werewolf By Night will be streaming on Disney+ Hotstar from October 7.

Karan Johar has shared a teaser for the eleventh episode of Koffee with Karan Season 7 featuring Varun Dhawan and Anil Kapoor.

“It doesn’t get younger & cooler than this on the Koffee couch - this duo will create a riot in this episode!!!,” he tweeted.

It doesn’t get younger & cooler than this on the Koffee couch - this duo will create a riot in this episode!!!
#HotstarSpecials #KoffeeWithKaranS7, Episode 11 streaming this Thursday 12:00am only on Disney+ Hotstar. pic.twitter.com/pbbZFvJ1a0

The trailer also shows Karan asking Varun, which of the two actresses, Katrina Kaif or Deepika Padukone, he would like to work with. To this Varun responds, “I always get told that I look like a kid, so maybe…”

Episode 11 of Koffee with Karan Season 7 will stream on Disney+ Hotstar from September 15.

Netflix has dropped the trailer of its upcoming Italian documentary series Wanna. The true-crime series revolves around the dark world of Italy’s teleshopping industry.

The synopsis reads, “The incredible story of Wanna Marchi, the biggest scammer in the history of Italian Television, and her empire of money and lies.”

Wanna will be available on Netflix from September 21.

The almost one-minute-long teaser shows Tim Allen’s character Scott Calvin, better known as Santa Claus, who decides to find someone to replace him in the all-important job of being a Santa as he focuses on enjoying some personal time. He even starts the interview process to select his successor. The series is being directed by Jason Winer who previously helmed Ode to Joy.

The Santa Clauses will be available on Disney+ Hotstar from November 16.

Disney has dropped the teaser trailer for Season 3 of Star Wars’ spin-off series The Mandalorian. Narcos fame Pedro Pascal is returning as the protagonist in the third season.

In the one-minute-50-second-long trailer, we see the main character walking around Galaxy’s Edge every day, but Mando carrying Grogu in a satchel feels like a perfect addition to the show.