Advertisement
Home / Entertainment / Madhur Bhandarkar on his brand of films

Madhur Bhandarkar on his brand of films

‘The budget for Kareena Kapoor’s wardrobe in Heroine was my entire budget for Chandni Bar!’ 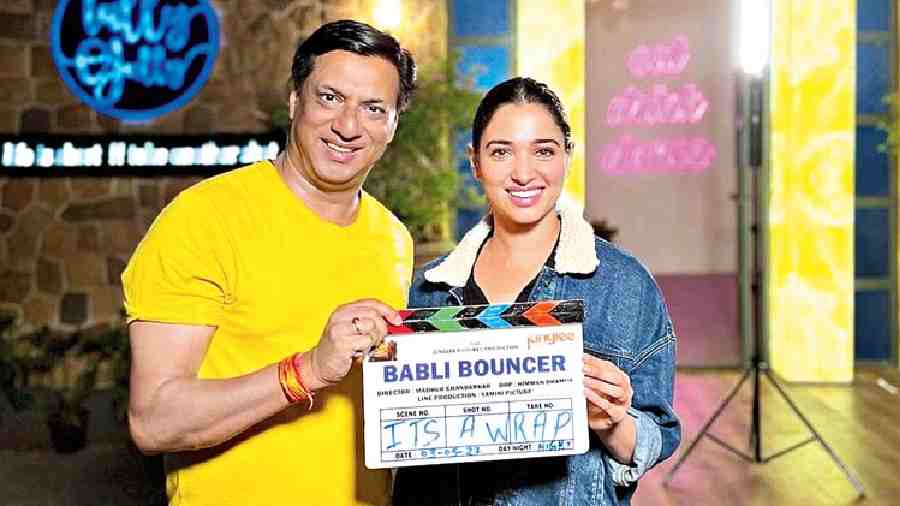 He is known for his hard-hitting films which have variously explored the underbelly of the worlds of journalism, fashion, Bollywood and the corporate world. Now director Madhur Bhandarkar shifts gears to tell the story of a female bouncer in a male-dominated bastion, in Babli Bouncer.

Currently streaming on Disney+Hotstar, Babli Bouncer stars Tamannaah Bhatia in the lead. The Telegraph caught up with Madhur for a chat.

What prompted you to tell the story of a woman bouncer, something which mainstream Bollywood hasn’t explored before this?

The fact that it’s a completely new world on the Hindi film screen. Tamannaah Bhatia is looking extremely brilliant in the film, she fits the role of a bouncer completely. She has done a fab job. A lot of people have been asking me why I am not releasing Babli Bouncer in theatres. But this film was always meant to be a Disney+Hotstar original film, it was commissioned like that.

What was the starting point of the story? It’s very unlike the kind of films that you have made in the past....

I did make a rom com of sorts with Dil Toh Baccha Hai Ji (2011)… it was a nice, sweet film. But yes, my image has always been of someone who makes very hard-hitting , real cinema that focuses on different aspects of society. Babli Bouncer is about a girl who wants to become a bouncer and she travels from a small village to Delhi, and that embodies the journey that most of the female characters have in my films. But in this film, I have used a humorous device. There is a romantic angle, there are heartfelt emotions.... Babli is someone who you root for because she tries to break into a world that has always been dominated by men... you don’t really get to see too many female bouncers.

I had written this film in 2019. But then the pandemic happened, and during that time, I was working on three subjects simultaneously. One was a big action film, another was a dark and hard-hitting film and then there was the script for Babli Bouncer. I zeroed in on this film because it’s a feel-good entertainer. This is a film that can be watched with the family.

At that time, everyone had gone through so much because of the pandemic, I wanted to make a film that would make people laugh... a lighthearted comedy film like what Basuda (Basu Chatterjee) and Hrishida (Hrishikesh Mukherjee) used to make. That zone is so beautiful and I felt it would be a good genre to attempt.

As a film-maker, I always like to explore worlds that no one has done before. This world of male-dominated bouncers being invaded by a woman really intrigued me. We gave a two-and-a-half-hour narration to Tamannaah who really loved the script. She was laughing so much she literally fell off the chair! (Laughs)

Even when I was writing, I always thought of her as someone who would fit the personality and physicality of the character in the film. Honestly, apart from Bahubali, I hadn’t seen any of her films. I just told her to surrender to my vision and she put in a lot of effort.

I am not a film-maker who does workshops or sit-down readings. We only did one reading initially to break the ice. But workshops and stuff are not for me because I improvise a lot, I change things up on set also. I obviously don’t change the story, but I try different things on set. If you do a workshop, I feel that your mind becomes fixed on one thing. I am very happy with how the film has turned out. It was very sweet of Tamannaah to say, ‘Madhur has relaunched me with this film’.

Is the audience today, post the pandemic, actively seeking out light-hearted entertainment?

For sure. During the pandemic, viewers watched a lot of dark entertainment, because there was a flood of that kind of content at that time. Now they are looking for fun and entertainment in their movies, but with characters who are real and relatable. People want to laugh, they want to destress as far as their entertainment is concerned.

But lighthearted doesn’t mean that a film doesn’t have a good story. We are living in the times of content-driven cinema. People are watching world cinema now. I am watching so many films from south India and I am loving them.

People will watch a good film, irrespective of genre. We have had films like Gangubai (Kathiawadi), RRR, The Kashmir Files and Bhool Bhulaiyaa 2 do such great business this year, and all of them belong to different genres. When I released Chandni Bar in 2001, different films of various genres had released and done well. There was Dil Chahta Hai, Kabhi Khushi Kabhie Gham, Lagaan, Gadar... mine was the film with the least budget. But so many people went and watched Chandni Bar. I have always been known to be someone who makes content-driven cinema. What people are drawn to today on the OTT platforms... I was making that kind of cinema 15 years ago.

You have made many films with women protagonists. Do you think women make for better stories to tell?

When I made films like Page 3, Fashion, Chandni Bar and Heroine — all with strong female protagonists —people would say, ‘Madhur hi aise filmein bana sakta hain aur Madhur hi chala sakta hain’. At that time, women-centric cinema hardly used to get any kind of budget... people only wanted to put it money on films which had a big hero. Today when I look back, over the last five-six years, a lot of my contemporaries are making women-centric cinema. With the advent of OTT platforms, every kind of project is getting greenlit and is being made with decent budgets.

Chandni Bar turned 20 last year. For many people, that’s your best film. What are your most abiding memories from making that film?

That movie made me a name to reckon with and enabled me to make so many other memorable films. All my films are close to me, they are all my kids. It doesn’t matter if they have worked at the box office or not. My honesty and my integrity in making every film is the same. Chandni Bar was definitely a film which pushed me into the limelight. It was a film that, despite its non-commercial story, I made exactly the way I wanted to make it. It was the springboard that launched me as a film-maker and made people take notice of me. It won me the National Award (for Best Film on Social Issues).

It’s a film which will always remain close to my heart because we made it on such a tight budget. I didn’t even have a monitor on set. Tabu would always look into my eyes and ask, ‘Kaisa laga shot?’ She completely surrendered to my vision. We were a relatively new unit and, as I said, we had no money. The budget for Kareena Kapoor’s (Khan) wardrobe in Heroine was my entire budget for Chandni Bar! (Laughs)