Advertisement
Home / Entertainment / Love we do: Ranveer and Deepika's favourite ‘together’ moments

Love we do: Ranveer and Deepika's favourite ‘together’ moments 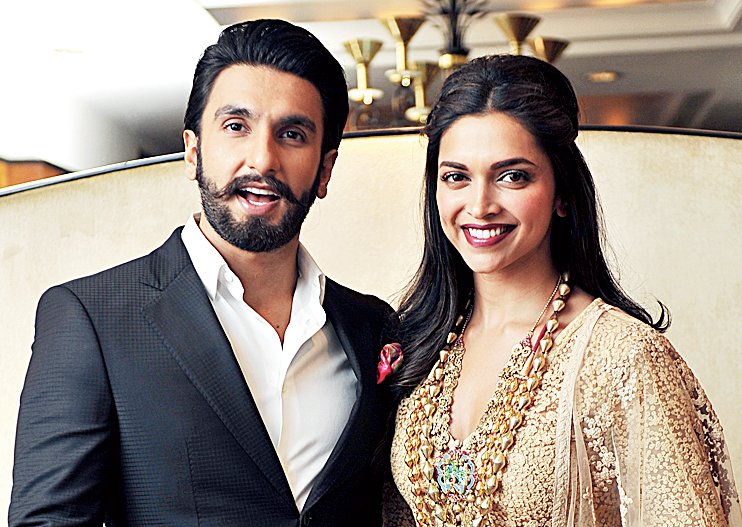 November 2013: t2 met Ranveer and Deepika — then in the early stages of their relationship — at The Park when they were in Calcutta to promote Ram-Leela, the first of the three films they’ve done together. While Ranveer had eyes only for Deepika — dressed in a gold Sabyasachi ensemble — she blushed quite a bit when she told t2 how much she liked his “silent, sensitive and intelligent side”. And it was fun listening to DP dissing RS’s sartorial choices when they thought no one was around.

Ranveer to Deepika: How do you like my shoes?

But we also love their chemistry

Ranbir Kapoor: The exes have blazing chemistry on screen, as evident in films like Yeh Jawaani Hai Deewani and Tamasha. There’s something easy about the two and that translates to moments both cute and scorching in their films. The proposal scene in Yeh Jawaani, with both at the top of their chemistry game, is an instant classic. Off screen, they give us goals by remaining close friends.

January 2015: Guests at a Mumbai hotel were amused to see Ranveer reportedly “chasing” Deepika around with a flower as she exited choreographer-director Farah Khan’s birthday bash, Karan Johar in tow. The sweet moment went viral. For the record, Ranveer finally caught up with Deepika as she was about to get into her car and gifted her the flower.

Ram-Leela: The first film they did together had their best onscreen chemistry. The steamy gyrations in Ang laga de may have set the tone, but the raunchiness of the Ram and Leela romance was best showcased in the moments leading up to Lahu munh lag gaya — she suggestively smearing gulaal on her neck, he doing the same on his lips, she pulling him close and kissing him passionately.

Bajirao Mastani: The two sizzled even when they had their swords drawn at each other. Firebrand warrior Mastani, dressed top to toe in armour, sneaks into Bajirao’s tent. She attacks and maims his guards, but meets her match in Bajirao who pushes her and she falls to the ground. Her helmet comes off and Bajirao is mesmerised by her beauty. But Mastani is determined to take him to her kingdom of Bundelkhand so that he can help them fight their enemy. He agrees and the two set off, with that image of an awestruck Bajirao staring at Mastani as she expertly rides her horse and overtakes him, being a memorable movie moment.

June 2015: They hadn’t come clean on their romance yet, but Ram and Leela dropped enough tantalising hints to suggest they were a couple. From colour- coordinating their outfits on the green carpet — she in a red blingy Sabyasachi sari and he in a red suit and bowler hat — to Ranveer warning a man in the audience screaming out “I love you, Deepika” with: “Easy, bro”, the couple were in full form. Ranveer also referred to Deepika as the “queen of hearts” umpteen times through the evening.

Shah Rukh Khan: He was her first hero and the screen chemistry between DP and SRK has only got better — Om Shanti Om to Chennai Express to Happy New Year. That they are pals off screen adds to their chemistry and camaraderie in films.

November 2015: Deepika took everyone by surprise, engaging in some PDA with Ranveer at the success party of Tamasha — an Imtiaz Ali-directed romance starring her and Ranbir Kapoor — in Mumbai. This was the first instance of the two getting cosy in front of the cameras and Ranveer did better than Deepika’s surprise hug — he kissed her on both cheeks with the two remaining locked in a long embrace.

Anushka Sharma: Ranveer has done as many films with Anushka — three — as he has with ladylove Deepika. Said to be a couple after they acted together in Ranveer’s debut film Band Baaja Baaraat, the two make a fun pair on screen who can also turn up the chemistry quotient when they choose to.

Sonakshi Sinha: They’ve only done one film — Lootera — together, but there’s something about the quiet yet searing chemistry between Ranveer and Sonakshi that endures. We wouldn’t mind seeing the two in a boisterous comedy film together!

December 2015: In the same year, Ranveer tweeted a cutesy video of him mock-crying when Deepika gleefully snipped off his ‘Bajirao moustache’. The look on Deepika’s face and the way Ranveer looked at her made his video a #win and #DeepVeer fans very happy.

The dubsmash videos featuring the two have been a riot, from the one where Deepika asks Ranveer to be her ‘best friend’ to a fun one in a helicopter where the two pretend to be secret agents. The cutest? The ‘Ek chutki sindoor ki keemat’ dubsmash that Ranveer sportingly did in the t2 office. Yes, DP’s famous dialogue from her debut film Om Shanti Om.