He loved and gave encouragement to members of the film fraternity, including us, says veteran actor Prosenjit Chatterjee 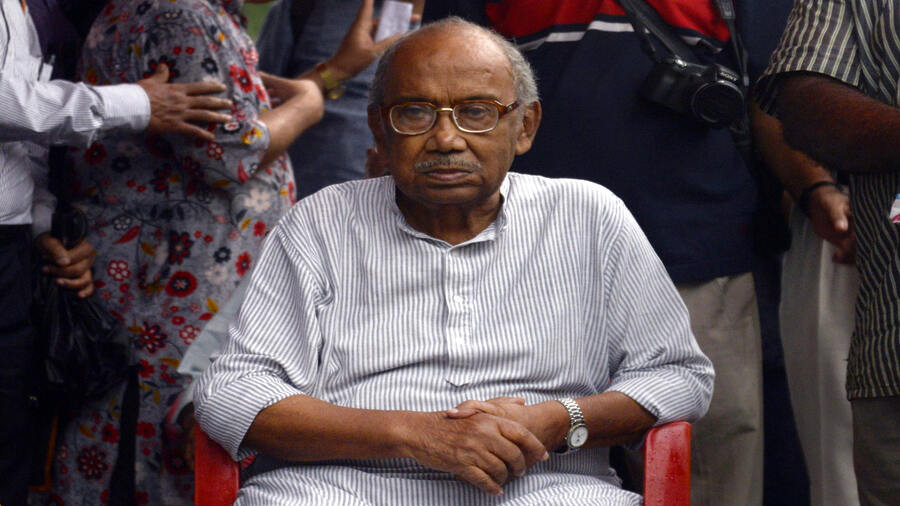 Bengali actors on Monday expressed grief over the death of veteran filmmaker Tarun Majumdar and said they have lost a guru and a guardian and that his demise is an irreparable loss to the Bengali film industry.

Majumdar died at a state-run hospital here during the day following prolonged illness due to old age and kidney-related ailments. He was 92.

His wife and leading yesteryear actor Sandhya Roy, who was cast in several of his films, said she couldn't have a last glimpse of her husband before his death.

"I had gone to the hospital a few days ago but could not see him. I was hoping to meet him after he recovers but that will not happen anymore," Roy, who had debuted in Majumdar's 'Chowa Paowa' (desires and fulfilment) and later in 'Amargeeti' (immortal song), said.

Veteran actor Prosenjit Chatterjee, who had acted in Majumdar's movies Pathbhola (wanderer) and Apan Amar Apan (oh my love), described the filmmaker as his "guru" from who he has "learned a lot".

"He loved and gave encouragement to members of the film fraternity, including us. I have countless memories of him. He was a jovial person," Chatterjee said.

Actor Rituparna Sengupta said she lost her "guardian" with the filmmaker's death.

"I had acted in three movies made by Majumdar. Besides 'Alo' (streak of light), which created history in the film industry, I also acted in hits such as 'Chander Bari' (house showered with moonlight) and 'Bhalobasar Bari' (house of love).

"He was such an energetic person who never got tired even after shooting from evening till early morning hours. I would often tell him that we should do another film but that will never happen now," she said.

Actor Debashree Roy, who had debuted in Majumdar's 'Dadar Kirti' (antics of elder brother), said "she owed to the director for whatever she has become today as an artiste".

"He shaped me the way a sculptor chisels an idol, day after day. He had even given this name Debashree. I feel like I have lost my father for the second time today," she said, while crying inconsolably.

He said Majumdar could make use of Rabindra Sangeet in a way no one else could.

"He was the last of legendary filmmakers of the Bengali film industry after Ray, Sen and Ghatak. He lived his life on his terms till the last day," Mishra said.

Director Goutam Ghose traced his association with Majumdar to more than 40 years and said that he lost a "guardian".

Music composer and singer Shibaji Chatterjee said Majumdar had invented his own style in which songs and narrative complimented each other.