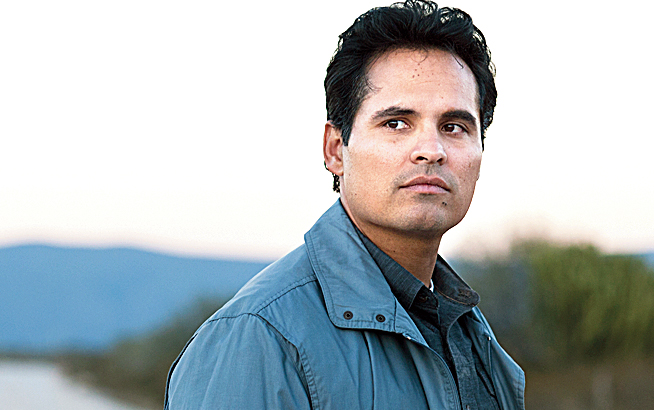 After two decades of delivering some fine work in films ranging from Oscar contenders such as Crash and American Hustle to big-budget superhero films like Ant-Man, Michael Pena is one of the most visible Latin actors in Hollywood today. In his latest outing, Michael plays Kiki Camarena, the undercover drug enforcement directorate agent who was driven to bring down the Guadalajara Cartel, established by rising drug lord Felix Gallardo (played by Diego Luna) in Narcos: Mexico.

Had you seen the previous seasons when they got in touch with you for the show?

I had not seen any of it. I have a 10-year-old kid who was six-and-a-half at the time, so I watched a lot of Toy Story, Pixar and Disney films. Eric Newman told me about Kiki Camarena and I thought it was really cool, so I watched two episodes immediately. I thought it was a great show, so called back to see if they were serious. We always talked and had an ongoing conversation. He was always really good with me, answering all my questions. I watched the other 18 episodes in a week-and-a-half. I blame my “binge-itis” on Narcos! (Laughs)

Kiki Camarena is a very tenacious cop. What kind of research did you do to get a sense of him?

When you read the character on paper, you feel that he was very focused and lonely. But psychologically, why was he so lonely? I needed to find out what made Kiki tick, and what was his motivation. I spoke to his wife Mika for quite a while and she helped me understand Kiki. His motivation was that he just saw things going wrong that weren’t supposed to happen, was telling people that they weren’t supposed to happen, but they kept ignoring him. It kept eating away at him and he just got mad and decided to do something about it himself. He took it upon himself, and got lucky a couple of times but then got unlucky as well. That’s the true story about him.

As a Mexican-American, what does it mean for you to be speaking Spanish on camera for a huge show that goes to over 190 countries? Does that have personal significance?

It does, and it makes me feel good about the world, in a way. Spanish was my first language. I don’t think I spoke English until I was about five years old. I know that it is Narcos, it’s meant for entertainment and the subject matter is what people want to see right now, and that’s cool. But I liked the fact that we were able to be in a half-Spanish show. Hopefully, my dad will see it and feel proud.

In this political climate, is there a worry about the show typecasting or stereotyping a country?

The fact of the matter is this does happen and it’s not typecasting when it really happens, especially when you’re using real names and places; this one is based on true stories. At the same time, there are a lot of Spanish shows that are about good people. Also, while half of the people on the show are Narcos, the other half are trying to stop them.

You and Diego Luna have known each other a while. He also directed you in Cesar Chavez...

Yeah, I’ve known him for a while but at the same time, I only knew him as a director. So, it was different because he was telling me what to do for five months. The relationship now is very different. On this show, we didn’t get to meet too much but I think I’ve got to know him a little better in this press tour, having dinners with him and Eric. This has been fun, because you get to know the person a little more.

You started shooting this immediately after Ant-Man. Was that a shock to the system?

It was, definitely. I had a day off before going right into Narcos. It was good, I had a lot of fun on the Narcos set, but it was a culture shock. One is a big stage with the best air-conditioning, lighting and green screen, and then I was suddenly running in the desert. It was very hot. I didn’t get rich off the series (laughs) but it was a tough shoot.

What are you watching?

Wild Wild Country. Oh man, it’s so good. I really like The Staircase, Making of a Murderer, Ozark. Actually, I thought 13 Reasons Why was pretty good, and there’s one show on Amazon that’s awesome too — a comedy called Catastrophe. I watch a lot of Netflix because they have a great amount of documentaries, and I love documentaries.