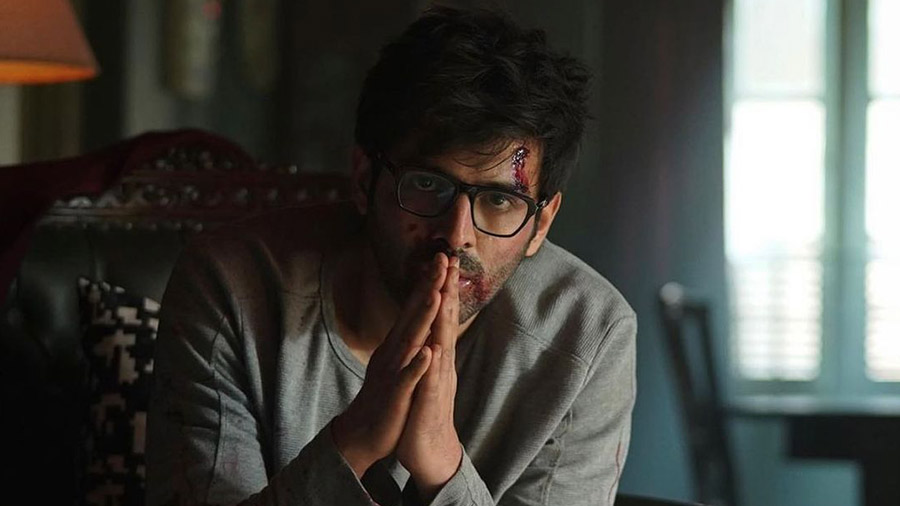 ‘No animals were hurt during the production of this film. Computer Graphics was used for the tortoise.’ This message scroll at the start of the Kartik Aaryan-starrer Freddy – streaming on Disney+ Hotstar — is very representative of the film that follows. I spent the film’s run time waiting for the tortoise to die and when it did, very sanitarily, I was over it already.

Predictability is the worst crime in a thriller and Freddy, directed by Shashanka Ghosh, is at least 95 percent guilty of it. The five percent is for the only twist that came as a surprise.

Lonely, introverted, socially awkward dentist Freddy Ginwala has been searching for his soulmate for five years but bumbles every date he sets up through a matchmaking site. Of course there is more oddity — he paints miniature plane models, he lives with his pet tortoise (in a gorgeous sprawling flat in Mumbai!) and the only women he can talk to without being awkward are two matronly aunts, who ask him to grow up and marry a girl but keep calling to ask what he has eaten for dinner.

He is a great dentist though, with a brilliant bedside manner especially when it comes to children. And he even offers house calls, but that is only reserved for the married woman he has a crush on. He also pervs on women’s cleavages (something that is never touched upon) and manages extractions without any help.

An accidental incident at a wedding and one dentist appointment later, Freddy decides that Kainaaz Irani (Alaya F) is the woman for him. That she is married is immaterial since her husband Rustom (Sajjad Delafrooz) is a jealous and abusive monster. And in a matter of days, awkward Freddy manages to make her fall in love with him. But how do they get rid of the husband?

It seems a divorce and restraining order are too legal to be considered as options, so Freddy volunteers to kill him. It takes him two days to recover from his first murder and waltz his way to Kainaaz only to find out that he has been short-changed for “protein shake” — an apt description of Kainaaz’s boyfriend Raymond (Karan Pandit) — and the demurely-dressed-in-a-salwar-suit Kainaaz is actually a vamp in a silk camisole (how long did she have to wait to be invited to a wedding to accidentally bump into him?).

This was the surprise twist. I mean, is it too much to ask that her wanting his restaurant would be more motivation to get her abusive husband killed than another man? Or that evil women can also wear salwar kameezes and those in cleavage-baring clothes are not evil? I didn’t say the twist was a welcome one.

This jolts the peace-loving Freddy into violence and what follows is a series of pranks (their retaliations don’t qualify any other description and are not even close to ‘chilling’) that each play on the other which includes, among other things, dishwashing detergent, a bullet (not fired), lying about snakes and eating tortoise soup. It is only in the last 40 minutes that the two-hour film becomes interesting because it is where the ‘chills’ are.

Aaryan tries really hard to stop the film from becoming as painful as a root canal, with a nuanced performance — he does get the body language of the awkward nerd right and is at his best once he tips all the way over. But with zero layers to the character, there is not enough left to salvage. True, Freddy witnessed his father killing his mother as a child (again, so predictable) but has never shown any indication of sociopathy nor emotional imbalance, never coveted anything or caused physical harm, so how or why does murder become an option for a man who lives a life on the straight and narrow?

Alaya F’s performance is also undermined by a poorly sketched-out character. Kainaaz seems more sociopathic than Freddy, yet we have no background whatsoever about why she is the way she is, especially her tolerance of pain. She was willing to get a tooth extraction to get a man to fall in love with her! Not only that, she gets slapped by her husband that very night and the next day she has the presence of mind to act vulnerable and make sure Freddy feels for her. Kudos, truly.

If Freddy was a patient at a dental clinic, it would have had to sell a kidney to pay for the sittings needed to fill all the plot cavities.