He burst into Bollywood with Hyderabad Blues, a semi-autobiographical — and unapologetic — take on a US-returned engineer and his sticky brush with arranged marriage. Over the years, Nagesh Kukunoor has given us some memorable films — Rockford to Iqbal, Dor to Lakshmi. This weekend, the 49-year-old filmmaker is back with Dhanak, the story of two siblings on a cathartic road trip through Rajasthan in the quest to meet Shah Rukh Khan. After being feted at the world’s biggest film festivals — Berlin to Poland to Montreal — Nagesh was in Calcutta this week to talk Dhanak. 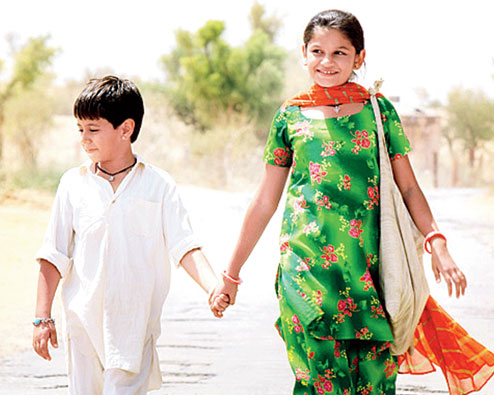 He burst into Bollywood with Hyderabad Blues, a semi-autobiographical — and unapologetic — take on a US-returned engineer and his sticky brush with arranged marriage. Over the years, Nagesh Kukunoor has given us some memorable films — Rockford to Iqbal, Dor to Lakshmi. This weekend, the 49-year-old filmmaker is back with Dhanak, the story of two siblings on a cathartic road trip through Rajasthan in the quest to meet Shah Rukh Khan.
After being feted at the world’s biggest film festivals — Berlin to Poland to Montreal — Nagesh was in Calcutta this week to talk Dhanak.

Unlike your fellow filmmakers, why do we only see you once in two years when a film of yours releases?

I only show up when a film releases. Being in the limelight is not something I enjoy. If someone wants to talk about my craft, I am always available… otherwise, no. I don’t enjoy promotions either. I didn’t do any promotions for Rockford (1999). I disappeared off to the US and my producer was pissed off. The press thought I was arrogant. Since then, I have learnt to shut up and promote my films (smiles).

Your films are almost always talked about. Don’t you feel your shunning the spotlight has stopped you from capitalising on your successes?

I’ve been very sloppy when it comes to being smart and padding myself up in such a way that a persona is created. I still have that same basic independent filmmaker quality in which I make a film and when it’s time to release, panic sets in ki yeh picture kaun dekhega? (Laughs) I’ve never been media savvy and that’s something that I now wear as a badge because everyone is not cut out to do everything. But yes, because of the way I am, it does become difficult to raise money for my films, especially because I don’t work with stars. I have been in the industry for 19 years, but no one knows me! They know of me… but no one knows me.

And yes, it’s been a disadvantage because if I am not on the radar of my producers, then it’s tough to forge relationships because I am not around either to give or to take.

When Manish Mundhra (Dhanak’s producer) wanted to speak to me about the film, he didn’t know how to contact me because no one had my number. I have been living in Bombay for eight years now. But when people come and meet me, the first thing they ask is: ‘So when did you land from Hyderabad?’ When you operate so much on the fringe like me, you’ve got to take what comes with it (laughs).

Let’s talk about Dhanak. What prompted you to write this film?

I am not someone who gives deep and introspective answers on why I make a film. Most of the time, the story engages me… there is a need to write about something.  I never consciously thought about it till someone asked me if Dhanak was a response to Lakshmi (his award-winning film about child rape, starring Monali Thakur) and that really struck me as a possibility. You shoot something as horrific as Lakshmi for so many months and then probably the natural reaction is to write a film that will remind me that the world is not such a bad place.

So Dhanak is essentially feel-good cinema?

It’s borderline utopia (smiles). It’s a film that tells me that an hour-and-a-half like this can exist on screen… there’s nothing wrong with it. Cinema doesn’t always have to have one big conflict and its subsequent resolution. You can make a film like Dhanak provided you don’t end up making it cloyingly sweet or boringly preachy. This story of a young girl taking her blind brother on a road trip on foot through Rajasthan just based on the immense faith she has on her idol is bound to bring a smile on people’s faces.

Why are you wary of casting stars, despite having worked with Akshay Kumar and John Abraham?

I am not wary… it just hasn’t happened despite my films being middling successes. Yes, I did work with these big stars, but I am glad they worked with me in my kind of film (Akshay in 8x10 — Tasveer and John in Aashayein) instead of me being sold out to them. The sad thing is that everything in this country is only defined by success. You are good only if you are super successful (smiles).

Hollywood has its own set of filmmakers who make low-budget films and yet are sought after. It takes all kinds to make it work, otherwise the (Steven) Soderberghs of the world, the Coen Brothers… wouldn’t be making films for 20-25 years now. Shyam Benegal’s films didn’t shake the box office, but did that really matter? The problem in Bolly today is that many filmmakers come in with strong, independent voices and the moment they are successful, their next film is with stars. That’s sad.

I got into this game very late. So I would assume I had some maturity when I got in. Filmmaking is not for the faint-hearted. You must have the ability to deal with a lot of nonsense 24x7. I suck at playing the game. I can’t randomly praise an actor and that’s why maybe stars don’t work with me (smiles).

So what do you do when you aren’t making a film, which is like most of the time?

(Laughs) You do make me sound very jobless! I don’t have cable TV. I stopped reading newspapers 10 years ago. Every now and then I escape to the US. My brother and sister both live in Arizona and my fascination for the desert — because of which I set Dhanak, Dor and (the unreleased film) Ye Honsla in Rajasthan — stems from there.
I do watch films off and on. I loved Paan Singh Tomar. I grew up on films like Deewaar. For a few years, I did try to write a screenplay mimicking Deewaar, but that hasn’t come to much. There were parts of Barfi! that I loved a lot. I just finished shooting a play version of Tagore’s Daak Ghar.... And American TV shows are my bread and butter.

Oh, so many! You want me to name them all? Wow… let me think (pauses)… Dexter, (The) Walking Dead, Breaking Bad, House of Cards, Boston Legal, The Wire… I can’t operate without my daily fix of American TV (smiles).