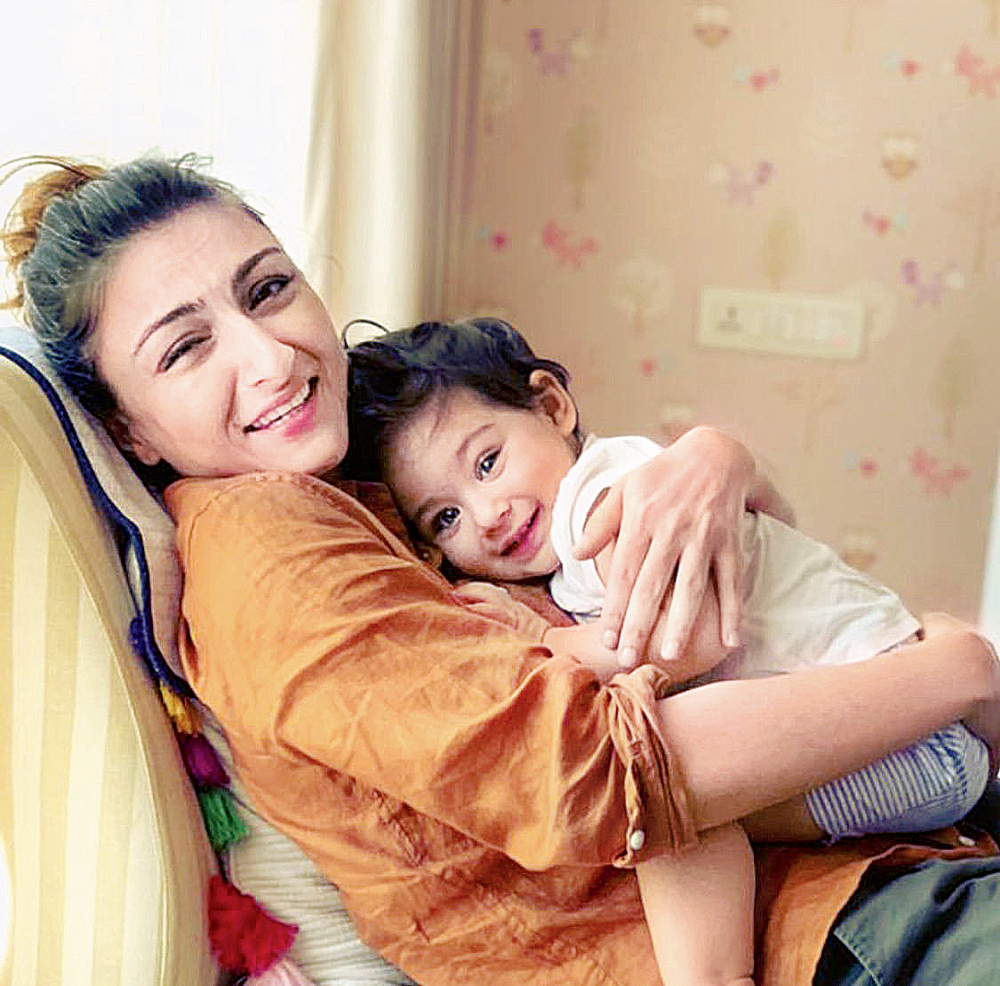 Viacom18 recently launched VOOT Kids, an app for children aged 2 to 8. The Telegraph caught up with Soha Ali Khan, who was a part of a panel discussion at the event about motherhood, her daughter Inaaya and her association with the app. Excerpts:

How is it being associated with VOOT Kids?

I think it's a very timely association and one that I am really excited about because I was actually really looking at how to introduce my daughter (Inaaya Naumi Kemmu) who is now 2, to screen content which I think can be very educational as well as, of course, entertaining. But you can also provide various educational services. And I feel like it was good for the two of us that VOOT Kids came into my life at this time when I was looking for something like this. I have been through the app, I have already consumed a lot of content. I have been reading a lot of stories because I also read to Inaaya and I tell her stories at bedtime and things like that. Now I am slowly introducing screen time to her as well. So, I think it's wonderful because it has curated content. It is responsible, has the right balance between being educational and entertaining. It has got a vast library. It would have been very difficult for me to go through the Internet and find and download lots of things so that has been done for you. And, of course, what's wonderful is that it has ad-free content. So, considering all of that I think it's a wonderful thing for children from the ages of two to eight especially.

You've also given voice for the audiobook Karadi Tales for VOOT Kids. How was that experience?

I loved it. In fact, I wanted to do more of narration. I like the whole concept of audiobooks and I think if they are read with the right person, it can really help a lot of people who don't know how to read to their children and don't enjoy reading books. It makes it a lot easier and there's a lot less strain on the eyes. You can do it on the go in the car and things like that so the whole concept of an audiobook, I really like. I really enjoyed reading for Karadi Tales and I want to do something like that again.

What kind of stories do you narrate to Inaaya and what kind of shows does she like watching?

She is very new to the screens because she has only just turned two. So really before the age of two I believe that it was more about her interactions with people and not screens. I think that most people agree that until you are 18 months there's not much you can learn from a screen unless you are FaceTiming with a grandparent or someone who is not there. So, the first time she was introduced to the screen was I think when watching her own videos on my phone, for example. That was unavoidable because if you are going to take a video of your child, she is going to notice you taking that video and she is going to want to see it. And then she understands this concept of what a photograph is and what is a video. She likes all kinds of stories. This is the age where their imaginations are being fired and she wants me to tell her stories. And now I am actually running out of stories which is why I was going through the VOOT Library to pick up short stories as well because they need not be very long. They need to be engaging and then you have to actually narrate the story with a lot of drama which Kunal (Kemmu) is very good at and I am becoming very good at. But around bedtime also you need the kind of story that will soothe them. In the day, that will engage them. You need to be well-versed. She loves, like many children, Sesame Street, she has seen Peppa Pig. We have read the Panchatantra tales and Aesop's Fables to her. There was Diwali so I told her the story of Diwali and there's a little book where someone had written about Ram and Sita and Ayodhya. Now with Guru Nanak Jayanti today, I have told her the story of Guru Nanak so you know whatever is relevant also. Whatever she is celebrating, you try and make a story around that but of course her favourite character in any story is herself. She likes to be the central character.

Any fun plans with her for Children's Day?

Every day is a plan with her. Her life is very packed and very busy. On November 14, she has yoga and she has school. So, we have to try and work in some time, she is very good at it also. Every day is precious with her, so everyday is like Children's Day with her.

How has motherhood changed you as a person?

It does of course change your life completely and anything that you thought of was a priority before this, is no longer a priority. She comes first. Everything changes according to what will help me spend time with her or you know make her happy in some way or is good for her. So, her benefits come first as I feel it should be.

Between Kunal and you, who plays the good cop and the bad cop to her?

I think I have made most of the rules and therefore I sort of enforce most of them especially when it comes to things like bedtime, meals and whether it's important to go to school on a particular day or not. Those are the rules I've come up with but Kunal is very supportive of my rules. If I say something, he doesn't contradict me. I think it's very important. You have to put up a united front.

What kind of a mother are you? The helicopter parent or chill?

Do you think educating kids through the digital medium is the new way forward?

I think it's one of the new ways forward which will complement many of the old and tried and true methods like actually reading books and introducing that to your child. I don't think it will be able to replace that and I don't think they are trying to replace that either. I think they are just trying to supplement ways because they understand how effective audio/visual content is and how mesmerising it can be. But also, it is a very powerful tool and it needs to be leveraged responsibly which is why I am glad that VOOT and Viacom18 are doing something like VOOT Kids because they are engaging children, but they are also educating them. They also understand that it needs to be subject to parental controls. That there are ways of setting time limits. The content is up to standard. And they've done a lot of research in terms of putting together a vast and very engaging library.

Growing up, what are some of the fondest memories you have with your brother Saif?

Great. Actually, there's a huge difference between my brother and me, almost 10 years. By the time I was born he was going off to boarding school and then when he came back, I was going off to university so we didn't really grow up in the same house. I remember him being very naughty. My mother used to say, 'You girls are very good compared to what we've been through with your brother'. Now that we live in the same city and nearby, we spend more time together.

Do you take parenting advice from your mother (Sharmila Tagore)?

One thing that any mother will tell you is that they don't want any advice from their mother or mother-in-law, they want to do it their way. There's so much new-age advice. Usually people turn to the Internet, they turn to their friends. Mothers tend to forget, like you know 30 years ago when did we start changing, what was the first thing we ate? So, you want something relevant now, something that is contemporary advice. Someone that has been through it recently. Whether it is teething or a fever or what are the toys I should be playing along with her, basically something who has a better memory is more useful.

Does Taimur (Ali Khan) and Inaaya remind you of your childhood with your brother?

No, because they are nine months apart and very close in age. We are nine years apart so not really. I will also say that I think the gender lines are getting blurred. You know, like how I said we were very good and Bhai was quite naughty, I'm happy to see that girls are equally adventurous today. They are equally naughty, brave, ready to take chances as the boys. I feel like Inaaya definitely looks to Taimur because he's older than her and he can do so many things that she's learning to do now. Like he walked before she did, he ate solid food before she did. He was able to do things in their gym class together before she did, so she looked to him and other older children as role models.

Do you believe that digital learning will completely vanish the traditional forms of learning?

No, never. I don't think the traditional forms of learning will ever go. There's a reason why they are traditional and they've endured for so many centuries. Whether it's sitting on your grandmother's lap and listening to a song or story, whether it's reading books which I have loved doing as a child and I would certainly want Inaaya to do if she's interested. I don't think that they'll replace them but they'll supplement them.

Have you set any duration for her to consume online content?

Yes, and I think that's important to do. At the moment it's only 10 minutes a day because we've only just started consuming online content. Majority of it is her watching her own videos. Like she'll even now say, 'I want to see me running in a park in London' because we went there for holiday in the summer. She wants to see herself chasing pigeons or her doing something or me doing something, like people she knows. Slowly we are getting there. Yesterday we watched five minutes on VOOT Kids together, so that was nice.