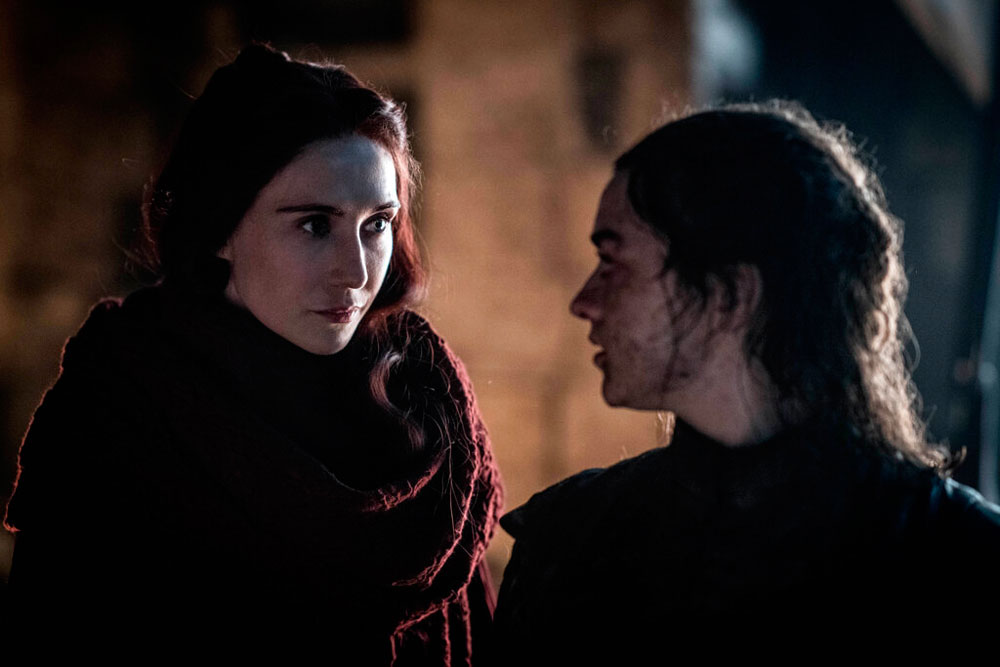 Maisie Williams, right, and Carice van Houten in a scene from Game of Thrones that aired on Sunday
Picture by AP
Shrestha Saha   |   Published 30.04.19, 02:03 PM

82 minutes of sharp intake of breath and convoluted expressions later, we were finally done with what is being hailed as one of the most iconic episodes of the Game of Thrones. But was it really? For an audience used to observing minute moments of missed details to string together theories and plot lines, this episode felt like it was created to pander to the whims and fancies of fans who are hungry for blood.

Beautiful cinematography and a background score that sent shivers down your spine, ‘The Long Night’ was a true spectacle; at least the parts that you could see through all the darkness (pun intended). There is a meme circulating on the Internet which shows Jon and Daenerys with the comment, “When you work hard for a job but the dude gets it because he is a dude”.

This episode made us wonder who made Jon Snow in charge of the battle plan, where he thought it would be a great idea to send troops marching into absolute darkness, towards an enemy hitherto unknown and supposedly unbeatable. He needs saving from a swarm of wights by Daenerys on a dragon, and he further needs saving from Viserion by his sister Arya Stark. Does impassioned speeches before the war really make him worthy of the Iron Throne?

For major part of the scenes involving the dragons, it was hard to discern which were the fire-spewing ones and which one was Viserion, the ice-dragon that spewed blue fire with the Night King on his back. While the darkness of most scenes suited the atmosphere, we wish that one did not need to reach for their glasses and squint harder at the screen than Samwell Tarly shook throughout the episode. Ned Stark’s death set a precedent for the shock that followed which disallowed GoT fans from choosing favourites, fearing their imminent death. Other than Greyjoy, Jorah, Dondarrion, Lyanna and Melisandre, the death count or the lack of it from a war which made even someone like the Hound almost excrete in his pants, was more shocking than an actual heart-breaking death would have been.

Theon Greyjoy has been delivered from his misery — in the last moments of his life and in death. He died saving the family he had wronged, showing valour he was accused of not possessing. Closing old loops magnificently, there were multiple throwbacks to scenes from previous episodes and seasons that had us holding back a lump in the throat. However, with his name being added to the list of those dead, one realises that all of them died fulfilling the roles they were supposedly born to fill — Jorah saving his favourite Khaleesi, Theon sacrificing his life for a Stark, Dondarrion’s seven births only to save Arya, Melisandre, without whose fire the death count would have perhaps been more, much to a sadistic GoT fan’s liking, and Lyanna Mormont, the smallest who died taking down the largest with her.

“Maybe we should have stayed married.” “You were the best of them.” — two of the best minds of Westeros and ex-spouses Sansa Stark and Tyrion Lannister share a moment so poignant in the crypt that the scene does more justice in bringing some relief to the otherwise tumultuous episode than a witty and comical dialogue could have. One can count on their fingers the number of dialogues that are spoken in this violent episode for it is in the silence that the fear of death resonates.

But what happens to most of our favourite characters? While the focus remains on the dead, which are few, one does wonder about the fate of those not shown. Where is Ghost who went charging into the war, leading from the front, because that’s the only scene where HBO’s budget allowed a direwolf CGI. They had to switch off the lights in most of the episode to be able to save enough for that one glimpse of Jon Snow’s direwolf. The questions keep on piling up as the cinematic war plays out in the darkness in front of you. Where is Gendry? Did Bran really warg off through ravens just to give us an aerial view of the war? What happens to Jaime who we see fall towards the end?

And finally, a thousand dragon glass-made weapons for Arya Stark and the Iron Throne, too, if she so wishes. Like a shadow she moves through the library, amongst the dead, taking down a wight or two with her. The conversation she has with Melisandre just through her eyes proves her to be the queen warrior she was born to be. Her one arrow can save the Hound, her one look can burn an army and her one move can end wars. Right when death is imminent and destruction is home, there is only one character who can turn around and say, “Not today.” She trots off alone with a purpose known only to her and one is reminded of Sansa referring to her sister ‘lurking about somewhere’ in the first episode of the season. She later appears out of nowhere to take down an invincible Night King with a move reminiscent of the one we saw her demonstrate while sparring with Brienne of Tarth, last season. Were the makers really creating a throwback ambience to pay homage to the seasons gone by and Arya Stark’s phenomenal journey through it?

Somewhere on the one-hour-five-second mark, the music changes as does the entire episode. The haunting tune on the piano gives a stiff competition to the Red Wedding as Catelyn Stark watches the gates close on her family, but hardly tops it. As one battle ends and preparation for another begins, worrying for the fate of our favourite characters will have to wait. Not today.

Game of Thrones: Night before the war