Futuristic look at a world living in an alternate reality 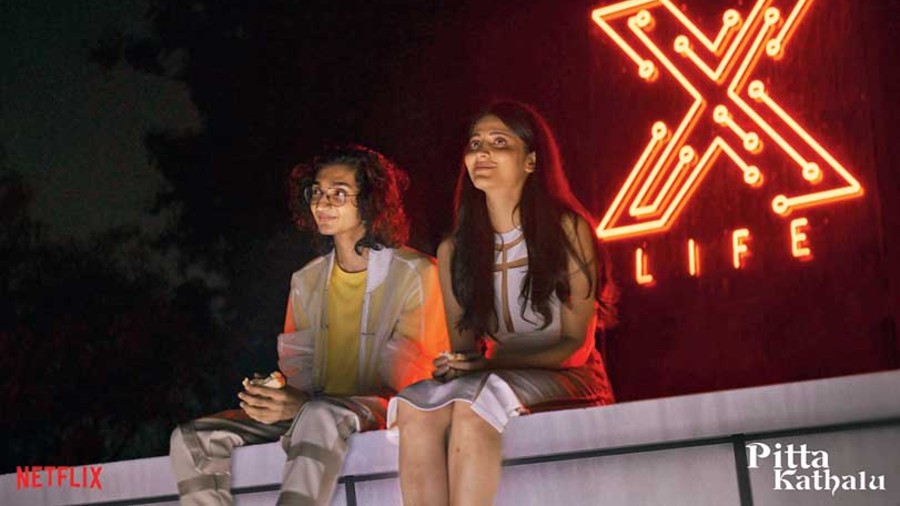 Dystopian drama: Shruti Haasan and Sanjith Hegde in Xlife from Pitta Kathalu, that drops on Netflix
Sourced by the correspondent
Priyanka Roy    |     |   Published 16.02.21, 12:08 AM

Pitta Kathalu, an anthology of four Telugu shorts in which women wrest agency and power from men, drops on Netflix on February 19. Shruti Haasan frontlines the film called Xlife, a sleek sci-fi futuristic look at a world living in an alternate reality. Xlife is directed by Nag Ashwin, the man behind much-talked-about films like Yevade Subramanyam and Mahanati, and who is all set to direct Amitabh Bachchan, Prabhas and Deepika Padukone in his next potential multilingual blockbuster. Making his acting debut in Xlife is popular playback singer Sanjith Hegde. t2 chatted with the three over a Zoom call on their film and beyond.

Xlife, your segment in Pitta Kathalu, is futuristic, yet relevant because technology has taken over our lives, in more ways than one. Nag Ashwin, how did the idea of the film come about?

Nag Ashwin: The idea came from what we see around us. Maybe it isn’t happening to the extent that you see in the film. A lot of people around us are disconnected and live in an alternate reality, and they don’t really know what’s happening in the outside world, even within friends and family. On a larger scale, even on a political and power structure corporation sort of level, we see that cell phones are so cheap. Even in the most backward rural areas, they may not have water, but they probably have a cell phone, and are stuck on to WhatsApp or TikTok or whatever. So this is a form of control, and who is controlling us and why, is the question that I had and I thought it was worth exploring.

What were the challenges of tying in a sci-fi short with an anthology that essentially tells the tales of women having agency?

Nag: Our brief wasn’t exactly like a ‘woman protagonist’ sort of story... it was more about power and love. It was a very general brief and we were told to tell our stories the way we wanted to. It was like, “Do what you want... just keep the word ‘power’ in your mind”.

Shruti and Sanjith, what was it about Xlife that intrigued you enough to sign on?

Shruti Haasan: Definitely the platform (Netflix) and the reach that it has, as well as the fact that I always like Nagi’s (Nag Ashwin) work very much. The film wasn’t pitched to me with the title Pitta Kathalu. To be honest, I may have been a little apprehensive if it was ‘women’s stories’ because, you know, how it can become almost a caricaturish representation of what women’s experiences are supposed to be. I am sure even you realise it... it’s not just about the male gaze, it just goes into this slot of ‘women’s stories’. So I am glad I didn’t have that in my mind at all. To me, this was actually a very human story, a potential future that we could be facing.

Sanjith Hegde: For me, it was the fact that I got to try something new. The film gave me the opportunity to do music and act, in the coolest way possible (laughs). I was just like, ‘Wow, this is something new... I should try it!’

Sanjith, with that hair and geeky glasses, you totally look like a tech wiz who could come up with an alternate reality like ‘Xlife’!

Shruti: So, so true! (Everyone laughs)

Shruti: He’s a perfect natural, even though it’s his debut.

Nag: The only thing is that he finds a way to block the other actors (in front of the camera). Half the time I was just looking at his hair!

Shruti: Jokes aside, his earnestness and dedication towards whatever he does is probably why he’s achieved so much at such a young age. He’s very sincere with everything that he approaches. On set, there are two ways to approach things, as we all do. One is to be in denial and the other is to be open and absorbing, and that’s what he was. It was energising for me as well to work with him.

For the three of you, what role does social media play in your lives?

Nag: It started off as a great way to find friends. Now it’s just become a promotional tool.

Sanjith: And if you don’t use it as a promotional tool, then you beat yourself up for not using it (laughs)

Shruti: I really enjoy it as a medium. I think it’s a great litmus test for things. If you just discard the chitter-chatter — which you have to do even in life — social media gives you real opinions and real criticism, which is constructive. In that way, I find social media to be the quickest, easiest, most diverse audience... it’s like taking a census on yourself every day (everyone laughs).

A few years ago, you wouldn’t have had an English newspaper based out of Calcutta interviewing you for your work in a Telugu anthology film. What do you have to say about these exciting times where divisions of languages and regions in entertainment have clearly blurred?

Nag: It’s definitely exciting, to be able to watch and also to see my colleagues and contemporaries be able to make almost anything that they want, and also the advent of new voices. There are only a 1,000 films that you can make in a year. But now with OTT, there are now suddenly 2,000 new things that you can make and 2,000 new voices that can come out. And like you said, it’s now all across India, it’s not just in pockets of languages. Exciting times!

Shruti: In the ’70s and ’80s, every film industry — Tamil, Telugu, Hindi — had a bonding, a mutual admiration and respect, and that’s something that I have heard from my mum (Sarika) and my dad (Kamal Haasan). Slowly, that modelled into, ‘Let’s just take ideas from the south and remake them in our own way’. And the link that was there between industries kind of broke in the ’90s, I think. The country is pocketed as ‘Bengali films are like this, Malayalam films are like that’... and as a result, we don’t get to see each other’s beautiful art.

I am now really excited about the fact that a lot of people, courtesy streaming platforms, get to see content in its original form, before some can remake it and ruin it! (Laughs) Given that I am born into a multi-cultural home — my mum was born and brought up in Mumbai, my dad in Chennai, I grew up everywhere — I have felt that films like Chennai Express present such a caricaturish version of south India, such a caricaturish version of the food we eat. Imagine if you go up to a Mexican and say, ‘Fajita and enchilada’, he will probably knock you on the head! (Laughs) The south has always been relegated to a different department, and I have always found myself to be a proud defender of the cinema of the south and culture and my accent... and now I feel it’s really beautiful that things are changing. It’s beautiful that you are in Calcutta, we are in Hyderabad and we are having a conversation about a film in Telugu, though predominantly ours is in English. It’s a very interesting time.

How has life and career changed for you in the last year?

Nag: I definitely slowed down a bit. We were all in this race. Initially, it was 30 days of sitting back and making up for lost time. And when the lockdown kept going on, I just sat back and felt sorted and happy in terms of being able to spend time with family. I did that for a good four-five months before I got restless again!

Shruti: It’s a habit I always had, but gratitude became a big thing for me in the last one year. The collective consciousness of what we were all going through made me think of gratitude in a whole new way. I spent a lot of time all alone, with just my dog Clara, and the experience of introspection became really layered for me. My biggest fear, for a long time, as a younger person, was being alone, being out of a relationship....

During this time, I realised what loneliness meant to me and that I wasn’t lonely in my own company... I was just lonely in the company of people I was with.... I realised that I am stronger than I am, but that I can also be very emotional and vulnerable. To take that to set as an actor was amazing. To be strong enough to bring my vulnerability to a character without fear.