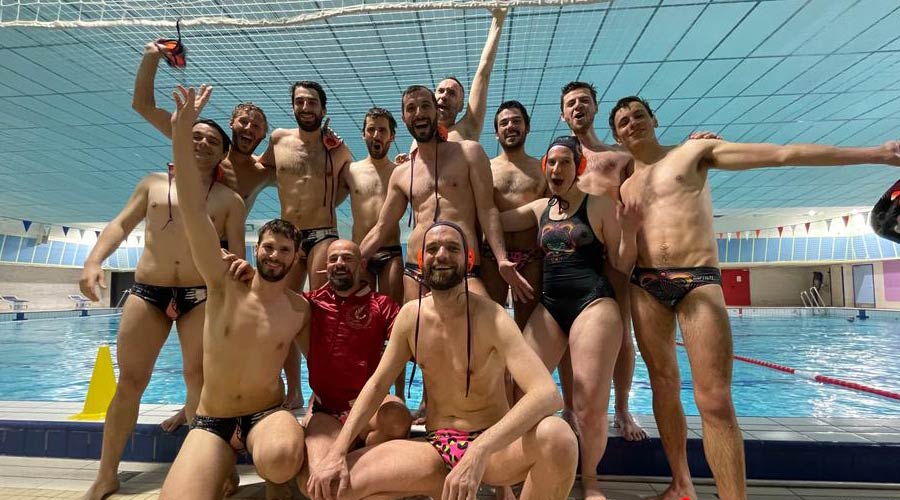 "The Revenge of the Shiny Shrimps" follows an all-queer water polo team that lands in homophobic Russia. But the scenes had to be shot in Ukraine, before the war.

The fictional water LGBTQ polo team portrayed in the hit French comedy, "The Shiny Shrimps," was inspired by an actual group of people who practice the sport together.

When DW met them at their Wednesday evening training in southern Paris, they were still warming up, all wearing bathing caps with bright orange plastic ear coverings.

"You have to cover your opponent, and you have to do it with body contact," coach Sebastien Beysson told the athletes before they started playing. "Body contact is no problem," one of the players replied, and the others giggled.

A whistle then kicked off the game.

Half the team worked to get the ball into the opposing team's goal as many times as possible, while the other half sat on the substitutes' bench on the sidelines.

The first film inspired by the Shiny Shrimps came out in 2019; now its sequel, "The Shiny Shrimps Strike Back," has been released in France and will soon be screened at international festivals.

All while centering on the world of LGBTQ water polo, the new comedy also illustrates the culture clash that separates Russia from Europe and Ukraine.

Film comments on homophobia in Russia

In the 2019 film, an Olympic champion swimmer is offered a chance to make up for a homophobic statement by coaching a gay water polo team.

On their way to the Gay Games in Tokyo, the players have to spend a night in Moscow because of a booking error. The police arrest some of them and take them to a gay conversion camp.

In the film, the water polo team is detained by police in Russia
Deutsche Welle

"It is important to show that in some countries of the world it is not easy to be gay," he said, including in Russia, where it is "illegal to be a man kissing your boyfriend on the street — because that's considered LGBTQI+ propaganda."

The law made it impossible for the crew to film in Russia.

'Ukrainians want to be part of Europe'

In Ukraine, people speak Russian, some of the architecture is reminiscent of Russia — so that is where filming took place from January to April 2021.

Le Gallo still can't fathom that tanks are now rolling down the streets where he was filming, and that people are dying in the war. "The whole situation just shows more clearly how different Ukraine and Russia are," he said. "Ukrainians want to be part of Europe, they are more like us and very different from Russians."

Coach Sebastien Beysson, who was an extra in the film and part of the shooting in Ukraine, agrees: "You could feel that Ukraine was in a positive momentum towards more personal freedoms, not only in terms of LGBTQI+ rights," he told DW, adding that at the moment, none of that matters.

"It's terrible that there's a war going on in Ukraine. The actors we were shooting with a moment ago are now busy defending their country, fleeing, or moving their family to safety," says Beysson.

Dmitriy Soloviov is one of the film's actors; he plays the leader of a gang that goes around beating up gays. Months after the shoot, the 33-year-old Ukrainian is a member of a militia in the central province of Cherkasy.

"Until the Russian invasion began on February 24, we Ukrainians had many Russian friends and colleagues with whom we got along really well," he told DW via the news app Telegram, adding that this is no longer possible: "Russia is now only an aggressor and an enemy."

Actor Sasha Ivanov, who plays a Russian who admits himself to a gay conversion camp because he no longer wants to be gay, says the film is like a metaphor of the Russian state: "The camp symbolizes Russia as evil," says the 20-year-old, who fled to France just days before the Russian invasion began. The Russian state has been throwing people in prison for a long time just for being who they are, he says.

"'The Shiny Shrimps Strike Back' counters that with an almost therapeutic message — and that is to love yourself and accept yourself as you are," adds Ivanov.

The war in his country deeply upsets Ivanov, but he is confident that "Russia will never be able to dominate Ukraine."

"After every war, every crisis, comes a renaissance, a golden age of culture," he argues, recalling the wealth of cultural events, films and concerts after the 2014 Maidan Revolution. "After this war, it will be the same."

The film gives hope to Soloviov, too. "This is such a wonderful film about life and free love — I hope we will all work together on the third part soon."