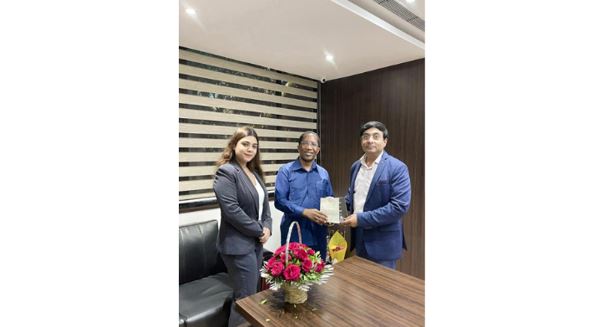 Reputed filmmaker Krishna Pimple is all set to take a huge step when it comes to strengthening the international presence of Indian music and also boosting bonds with other countries.

As the Hon. Consul of the United Republic of Tanzania for Southern India, Krishna Pimple is actively involved in Cultural and film exchange between India & Tanzania and other African nations. Now the latest news is that he is all set to collaborate with outstanding musicians and singers from Tanzania. The artists from Tanzania will visit India to do musical shows, record music videos, albums and singles.

Since there is already a great liking for Indian Music in Tanzania, the collaboration between talent of both countries is likely to boost opportunities and offer more interesting & soulful music to the music lovers. Krishna Pimple is working towards this excellent cross cultural initiative along with Tejal Pimple & Parth Dave.

Krishna will be visiting Tanzania to promote African – Tanzanian Films participation and promotion in India and other countries. Good movies will be shortlisted from Tanzania for screening at the 4th Innovative International Film Festival (IIFF) which will be held on October 21 at Bangalore.

Krishna Pimple will facilitate and organise the participation of Tanzania Films in India starting with IIFF International Film Festival.

The intention of Krishna Pimple to create a global impact as a filmmaker is what makes him special.

Krishna Pimple is also the founder of CIS Bureaus Facility Services Pvt Ltd which has a turnover of Rs 370 crores & group turnover is Rs. 700 crore annually. Besides this, he handles 42 offices with almost 25000 employees all over India. But apart from being a filmmaker and entrepreneur, he is also a nation builder with great focus on transforming the nation for better.

“I believe one can bring in the change & contribute to transform India from current rickety economy to a self-reliant nation" he says.

Krishna Pimple is known for producing films like Abhi Abhi, Choukat, Gharat and many short films and documentaries. He is now gearing up for the release of as many as 11 upcoming short films and movies which include names like ‘Kashmir: The Final Resolution’

Krishna also holds great position in the industry as he manages the responsibilities of being a lifelong member of IMPPA and Founder and Trustee of Dadasaheb Phalke MSK trust.