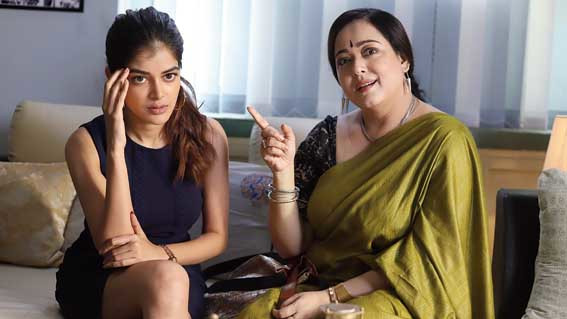 So far I’m quite excited and happy with the positivity that’s been showered upon this film. I can’t say I didn’t know it would be liked because that would be false humility. But yes it’s always nice when the positivity is this much around a piece of work that’s close to you.

Did anything about the feedback surprise you in any way?

Yes. What was surprising was the amount of domestic abuse that goes around in our country. I’ve had too many people surprisingly discuss how they related to it from a history of abuse and that has really surprised me.

Cheeni moves through these stark tonal shifts... of high and low dynamics. A high-pitched, intense scene is followed by a scene leavened by humour and then you crank it up again. Why these constant shifts?
I think when you are working on a piece that’s not so plot-driven as Cheeni, you’re sort of driving the story through the eyes of the character and I’m someone who loves to get into the brains of people. And when pieces become character-driven, the tonal shift is bound to happen because your final need is to entertain people. Quite honestly, I was getting into a film that has to do with the parent-child understanding graph and I didn’t want to write a boring thesis. I’m aware of what the audience wants as I would when I am one. I’d like to relate and be entertained. Also being able to create tonal shifts without hampering the overall effect is a fun thing to do as a storyteller because it involves the risk.

I think the structure of Unishe April was my major influence but I was telling a story very different from it. I wanted to make a film about how an adult daughter would react if her parents started becoming children. And that does happen clearly, which is why so many people are relating to the film. But I think the main structure that I was using from Unishe April was the female triangle of the mom-daughter and the maid as referee or thermostat between the two.

Apart from the story, do you feel the film resonated with so many viewers because it also addresses marital abuse....

Yes I do. And not just marital, it’s the concept of abuse — physical, emotional or otherwise is very common in our country and on some level that abuse creates a distance. I think what’s most important is I may have made a film that addresses abuse but I wasn’t making an issue about it. My film very clearly states that it’s supposed to be an entertainer. So I wasn’t here to add baggage to the audience. I wanted them to have a fun emotional journey and come out with a smile.

And instead of showing the abuse, you let the viewer imagine it. Why did you take that approach?

I remember in lockdown when I sat to rewrite the script, my first challenge to myself was to try and make a film with an invisible villain. It’s risky but it’s fun to be able to try that. And I think the fact that I don’t give the father a face in this film is why the horror of their problem becomes that much scarier. Very classic Blair Witch Project. The fear is scarier than the image of the ghost. I was trying to do the same in a drama.

Madhumita and Saurav Das.
Sourced by The Telegraph

These kind of scenes are very easy to do — build up a great 50 minutes narratively. Hire very good actors and allow them to bring in their top game as actors and people.

Nothing beats hiring good actors who want to impress you. So we didn’t rehearse the scene or discuss it much. Madhumita was working on her energy level over and over again. Apadi was calm in the corner trying to figure when to bring the energy up. Pinkydi (Banerjee) and Saurav were brilliant fielders. They knew their job was to jump in and stop the fight. Here I must owe it to my DoP Prosenjit. We knew it was a one-take game. And then a few extra fill-in close-ups. But basically get the shot once and walk. That’s how we got it.

The film also has some of your most incisive lines done in a deadpan way almost... very understated... for example, Saurav’s character saying, ‘You don’t let me in,’ equating it with Cheeni (Madhumita) blocking out her father’s memories. Where did this line or the approach come from?

I think I was heading with very inner and outer ideas and that played on within the writing. Like the room was a metaphor for the person. I think when you have nothing left but raw drama you use all your writing skills available to you.

Do you feel Mishti (Aparajita) was like Cheeni only, when she was young, before marriage? A bad marriage ruined it for her but she did hold on to her spirit and ghungroo...

I think we are all versions of our parents in some way or the other, which is why genetics play such a big card. Quite honestly, while writing I never sat and thought what she was like before her marriage. To me I was here to present a story and if it’s effective these questions will pop up. So in a way maybe she was similar. I know as much as you do. I guess only Mishti, the character, will know. And there are thousands of Mishtis around us who are far better equipped to answer this question.

Did Madhumita, Aparajita and Saurav have inputs about how they would approach a character or scene?

Absolutely. I’m a drama geek and as a director, I love actors. I’m not here to tell them what to do. I’m very selfish about my films. If anyone can add and make it better, please be my guest. Apadi from the get-go was going to understate and lift and we would discuss it a lot... how to not do the obvious. Madhumita has a crazy ton of energy and ability to shift tones. In fact a lot of the tone-shifting is happening because of her. So we would focus on the ups and downs. The whole point for me was to remind them at every step that in the first half of the movie they have to be tonally different and slowly converge as the film closes.

Saurav and I were very clear about his purpose to me. He’s a brilliant performer and his job was to play the outsider who allows the audience to see how weird the situation actually is. His job was to take sides and switch sides. That applied in terms of the characters and the tone. He would shift from funny to dark.

Chandreyee has a smart role in the film. How was it like directing her?

Absolute delight and fanboy moment. It’s not fair to say I was directing her. I would rather say I was offering her a role and watching her, and being entertained. You learn so much more when you’re working with great actors. Cheeni was such a learning lesson for me from everyone... Apadi, Chandreyee, Madhumita, Saurav and Pinkydi. They make me want to write better just so I can watch them kick ass.