‘Those specific shots of fire, the children, the burnt house and the demonic figure were timed in precision to build the mystery’ 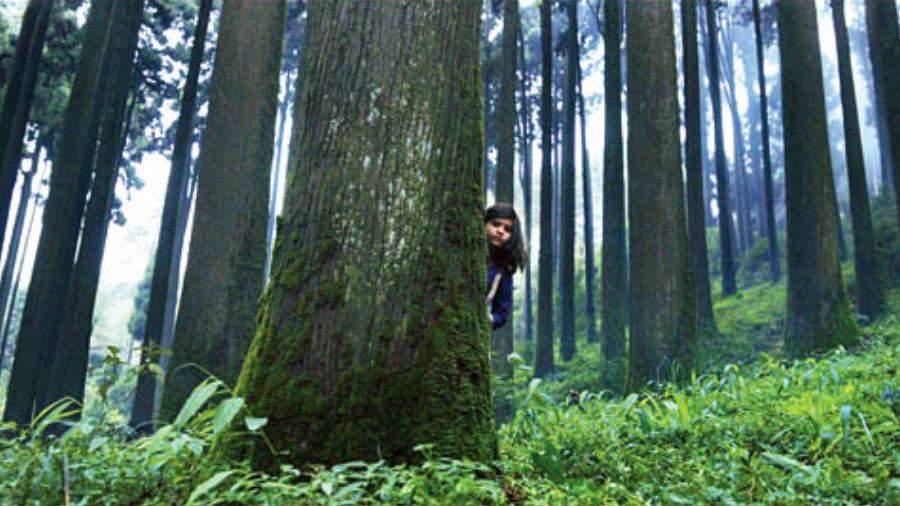 Team Jotugriha recently got together at Perfect Place In Town to launch the trailer of the October 21 horror mystery film. Starring  Parambrata Chattopadhyay, Bonny Sengupta, Paayel Sarkar and Piyali, Saptaswa Basu’s film Jotugriha follows a city guy who takes up a job as a manager in a hotel in a town up in the hills. Soon he faces a mysterious energy surrounding a haunted mansion where he meets a local girl, and Joseph, a middle-aged priest of a church. The Telegraph chat with Saptaswa.

What did you keep in mind while designing the trailer?

While designing the trailer, I wanted to maintain that it’s a mystery film primarily. There is no scope of showing unnatural shots of demons that will make the audience laugh instead of getting the chills. Throughout the trailer the horror factor has been kept atmospheric, very minor shots of ghosts are there which were designed very carefully to produce a quality VFX output. We wanted to draw in the audience into the world of Nishadgunj and its mysterious characters, and not deliver a one-dimensional jump-scare promo.

What do you want to convey through the trailer?

Since it’s a horror mystery film, the foremost element that we wanted to convey is the set of intriguing characters that the film has. If the audience gets to relate to them, they will definitely want to watch the whole story. Very little element of story is revealed in the trailer and mostly it has been kept ambiguous. I wanted to thematically establish that our past is our source of horror, the past haunts us. Whatever demons are there due to karmic records, they will someday come back and haunt us one day. The trailer itself stands out as a slice of the story where very few characters are facing their inner demons and a so-called evil spirit in the lonely heart of a village in the hills.

Parambrata and Bonny at the trailer launch

How important are trailers?

Trailers have always been very important. They can make or break a film’s fate. These days people outright reject a film after watching the trailer. Many bad films can have excellent trailers and vice versa. The concept of trailers were made primarily from a business point of view, but today it is considered a form of art; there are even festivals where trailers are screened and awarded.

Whenever we refer to a film or have a friendly chat, we tend to visit the trailer link. Even for blockbuster movies, people wait eagerly for the main trailer and the view count shows how much one likes to have a first exclusive glimpse. So trailers are truly important both from the marketing and aesthetic perspective.

How did you decide on what visuals and dialogues to keep for the trailer?

I had a clear-cut narrative set in my mind regarding showing the primary characters in their elements and in parallel, establishing the setting of the film. The very first intro is done by Bonny’s character Rehan who is entering Nishadgunj for the first time. The main dialogue part used in the trailer is that of Father Joseph (Parambrata) who is discussing certain philosophical and spiritual aspects of existence. There is an energy beyond what we perceive and that is agreed upon by many scientific communities as well. So I overlayed those dialogues with a montage of paranormal occurings throughout the trailer to build the suspense element. The characters have shades and their own demons are troubling their peace. Those specific shots of fire, the children, the burnt house and the shot of a demonic figure all were all timed in precision to build the mystery.

What has the feedback been so far?

The feedback is extremely positive. Audience and reviewers have been pouring in with positive comments. They like the visuals, VFX and the characters. There has been a scarcity of good horror films in Bengali and that’s why people are excited to watch it. Many are analysing the trailer, trying to decode or predict the story while others are praising Parambrata’s unique look and Bonny’s subtle portrayal of a different kind of a character. Piyali is debuting in this film and Paayel is in a special appearance and they have also received positive reviews from the trailer.

Did you focus more on building the atmosphere and ambience and establishing Param’s character in the trailer?

I definitely wanted to build the atmosphere while establishing the key characters. Param’s character is very unique and a USP in this film due to his look and characterisation. Also he gives the insight about Nishadgunj to Bonny’s character when he first arrives. From a narrative point of view, it provides the foundation of the whole story. The atmosphere and interesting characters with the foggy ambience of the mountains are the high points of this film. It has a layered storytelling and realistic characters. It can be characterised in the social horror genre and has the potential to invoke genuine chills. Therefore I built the trailer keeping these points in mind.

What are your thoughts on the jump scares?

The audience has been watching horror films for decades. I have learned from classics such as The Exorcist or modern horror films such as the Conjuring universe and learnt that the unpredictable works best. Audience are well accustomed to jump scares nowadays and most times they are presented as cliches. With the visual and sound design I wanted to create an unpredictable sync so that the moments are built when the audience is not expecting it. It’s a kind of dichotomy that we have tried in sound design as one can notice the BGM is mostly of voices, certain realistic ambient noises and fire elements. There are a number of jump scares in the film but those are created with this similar sense so that the audience does not recognise them as cliches.