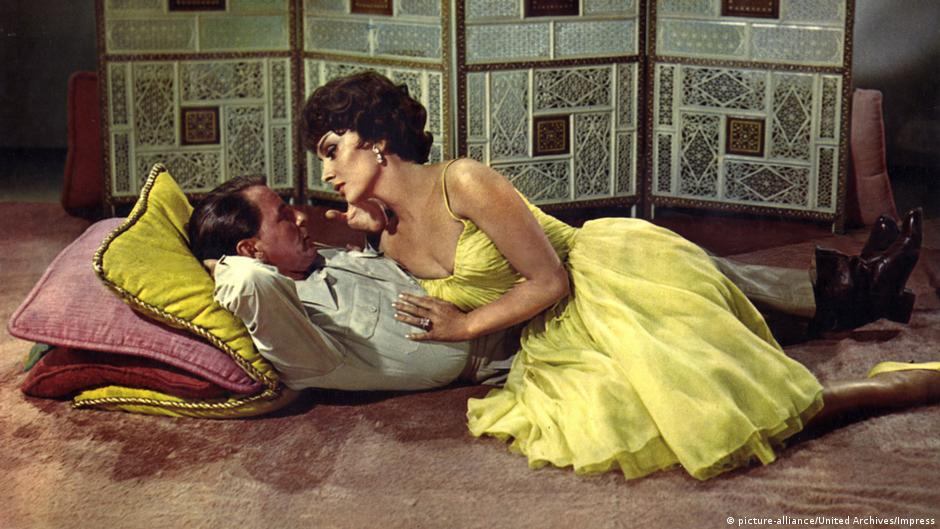 With some actors, you only need to take one look at the names of their movies to get an idea of where they excelled.

In the case of Gina Lollobrigida, her film titles truly say it all: Wife for a Night, The Unfaithfuls, The Wayward Wife, Beautiful But Dangerous — these are all titles from the 1950s, linked by a clear theme. That same theme continued well into the 1960s: Go Naked in the World, Strange Bedfellows, Pleasant Nights, The Sultans, Imperial Venus and Curious Way to Love.

Admittedly, the original Italian names of some of these highly eroticized film titles sound rather harmless in comparison. Film distributors throughout the world tried to draw attention to the attractive actress' sex appeal — even if the actual films didn't have much to do about sex.

And it worked. Lollobrigida became one of the most sought-after sex symbols of her era. While the US was busy promoting the likes of Jayne Mansfield and Marilyn Monroe, Europe responded with Lollobrigida and, later on, Sophia Loren and Brigitte Bardot.

And while the respective film industries on either side of the Atlantic were competing to crown the unparalleled beauty, Lollobrigida saw her own rivalry heating up with Loren.

Born to be famous

Born on July 4, 1927, just outside Rome, Lollobrigida began participating in beauty pageants at the tender age of 3. The camera loved her outstanding beauty — and she clearly loved the camera.

It was through these pageants that Italian film directors first took notice, when she was in her teens. Following numerous performances as an extra, La Lollo was cast in minor and increasingly larger film roles as she became an adult.

Her first major roles came in 1952, starring opposite French screen hero Gerard Philipe in Fan-Fan the Tulip and Beauties of the Night.

Lollobrigida's fame grew steadily as she enchanted moviegoers across Europe with her Italian temperament, her boundless sensuality and her impressive figure, which was only emphasized by the work of canny seamstresses adapting her outfits to highlight her assets.

The gorgeous Mediterranean brunette certainly had a knack for making the hearts of men skip a beat.

This did not go unnoticed in Hollywood, where Lollobrigida launched a successful career just a few years later. Her breakthrough came in 1956 with a pan-European production opposite Anthony Quinn in "The Hunchback of Notre Dame."

Despite her widespread popularity, La Lollo never managed to win an Academy Award. Though many other famous actresses over the years have shared a similar fate, it may just have been due to her reputation with regard to her acting ability.

Film producer Carlo Ponti allegedly once said that she was, at best, a "mediocre" actress. Whether or not he was right in that assessment is in the eye of the beholder.

With or without the coveted award, Lollobrigida's career continued to reach ever greater heights. In the 1960s, she starred in one movie after the next. While arthouse films were beginning to carve out their share of the market during that decade, she continued to see herself first and foremost as an actress in popcorn flicks. However, her fame could only go so far, and the nature of cinema was changing rapidly.

But instead of trying to push the envelope, she also wanted to focus on things that were important to her. She turned her attention to photography, and later sculpture, finding success in both.

But she didn't turn her back on show business altogether. A few minor roles in the 1970s and '80s aside, she remained true to her original calling by working as head of jury at film festivals — first in Toronto and later at the Berlinale in Germany as well.

The 1986 Berlinale, however, did not exactly run smoothly for Lollobrigida. As head of the jury, she caused a major stir when she rejected the majority pick for best picture.

Stammheim, directed by German filmmaker Reinhard Hauff, was clearly not her cup of tea. The courtroom drama took a closer look at the legal proceedings behind the trials of the "Red Army Faction," a group of radical left German terrorists held responsible for the murder of 33 people during the 1970s. The film clearly went against Lollobrigida's ideas of what constitutes a good film, and she didn't hold back in letting the press know about it.

Her choice to distance herself from the jury's vote was seen as unprofessional, but in hindsight appears to be testament of her trademark confidence that had taken her so far in life.

Lollobrigida managed to weather the controversy, and is still recognized as "the" Italian diva to this day.