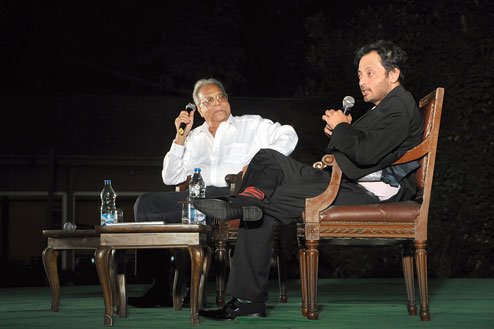 Calcutta got more than a quiverful of Jeffrey Archer this past weekend. Everyone from young business groups, colleges and clubs to discrete gatherings in five-star hotels got their infusion of word art from this prolific writer, who really appeared more like a showman-preacher in the way he strode various stages.

The one single takeaway from these various forums was his candid admission to being a straightforward storyteller rather than a writer. The distinction? The former gets his mass following, while those who consider themselves to be literary writers could have a more limited, if niche reach. With Archer there is no doubt that he has got his incredible readership, all 330 million of it.

His energy is unappeasable too. Much in the manner of the theatrical performances that he has a special penchant for (two plays a week on an average) Archer made his appearances with metronomic punctuality at five different venues on just a single day! At each place with a renewed spurt of energy, combining entertainment, edification, humorous asides and admonitions, views on cricket. But always with that singular focus to talk about the fact that the story’s the thing.

And all else? There lies the rub. I had a one-hour interaction at end of day’s play on Saturday — 8pm to be precise — at the Calcutta Swimming Club. And quite apart from beginning at the very beginning, with Not a Penny More, Not a Penny Less and how it was written under impecunious circumstances, one wants to know about his £100million art collection, his prison years, et al.

as, these aspects are brushed aside quite brusquely. Grrr.... Artful dodger. Though I do force him to admit that he is the art collector of the family, but it would have been so much more appealing to hear about his personal collection, from which he could actually dispense with more than 100 paintings and sculptures at a Christie’s auction that fetched £5 million. And the works that were up for sale? A marvellous landscape by Claude Monet La Seine pres de Vetheuil, a silkscreen Andy Warhol of Marilyn Monroe (“Did you dispose of it because your wife was jealous of her?” I asked, to which came a laconic “She’s not like that” defence) and lots of Bonnards, Pissaros, Sisleys.

Archer himself did a charity auction around the same time where items like Margaret Thatcher’s handbag went on sale and it seems he loves to wield the gavel as much as he does his pen, having done over 1,000 such charity auctions, taking the rostrum to use his buccaneering thespian skills to rake in the moolah. Philanthropically, of course.

Shush. To use his own phrase. We mustn’t talk money, must we? I was being “vulgar”, he said, when I wanted to know whether he was missing out on royalties with the whole e-book revolution having happened. But yes, he did admit to getting his dues from those quarters.

Why is his prison term a no-no for discussion? Surprising, because some of his truest writings came out of his prison chronicles. If you haven’t gone through those, I would recommend putting aside the first parts of your Clifton Chronicles and short stories, to pick up any of the three volumes of his prison diaries — Belmarsh: Hell, Weyland: Purgatory; North Sea Camp: Heaven.

We also tread delicate ground when we rewind to a much earlier novel, The Fourth Estate, based, not very loosely on Maxwell and Murdoch. It was a riveting read, so why bring up the fact that he wasn’t sued. Further delicate matters: when asked about why he is so straitlaced about sex in his books, with so much erotica in today’s writing, he is completely dismissive.

The iffy side of India

A young woman wanted Archer’s uncensored view of India, to which he pointed out the indisciplined driving, the iffy food, and the inequality of opportunity where a person languishing on the roadside could have the potential to be a Mozart or a Picasso.

Oh yes, he could be brash, and condescending, and not at all ready to include India in his scheme of the Clifton Chronicles. But there’s no getting away from the lessons to be learned from The Right Honourable The Lord Archer of Weston-super-Mare, who, despite all the vicissitudes faced in life, is on top of the world, in demand wherever in the world he goes, (can’t get better than here in India with his multiple appearances and vast audiences), a successful wife, conferred “Dame” status for her dedicated directorship for the Cambridge University Hospital, and two well-settled sons, three elegant homes and an enviable art collection. What’s more, his own ability to keep fit, physically and mentally, to put in hugely disciplined hours of work to come up with enormous stories that seem to unravel out of his ever ticking tale-spinning brain.

I’m not finished yet. Here’s my Twist in the Tale. In the middle of the frenetic signing of books, when you could see his patience was on the wane, he suddenly perks up at the mention of a certain young lady, Bhargavi Kumari Mewar of Udaipur, admitting to me, adoringly, of this very bright, beautiful young lady who had become a close family friend. Princess Bhargavi is incidentally executive director of the HRH Group, the largest chain of privately owned heritage hotels and resorts in Rajasthan.

I had had a long conversation the previous evening with her on the phone in Jaipur, where she lives with her husband, one of India’s finest polo players. When I told her that Lord Archer was in town, she couldn’t stop talking glowingly about him. His beautiful London home on the Embankment, the 25th anniversary of the Archers, which she celebrated with them at their other home in Grantchester, her friendship with one of his sons, William (they met while studying in Cambridge and neither knew who the other’s father was!). Of her being a big fan of Archer’s (with his “identifiable distinctive, even filmi style”) writing.

Hope that is true of all those who trooped up to the author armed with brand-new imprints. Are people truly reading? Or just collecting books to get them autographed at book readings? Hopefully the page-turner that Archer is could spur people to pick up books to read, not rack them.