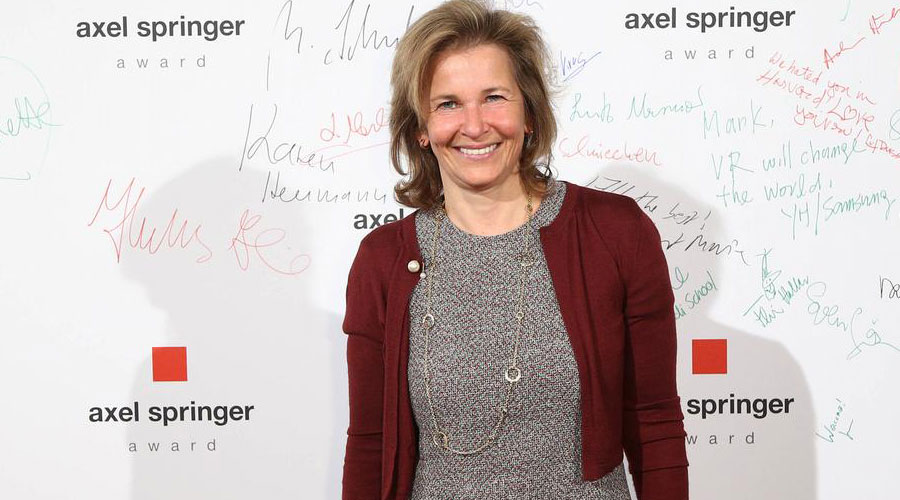 When German manager Iris Knobloch begins her mandate as the new president of the board of the Cannes Film Festival, she will also become the first woman to hold the top job at the world's most famous and important film festival.

She is taking over from Pierre Lescure, a French former TV journalist and executive, who has been Cannes president since 2015. The 76-year old will be stepping down after this year's edition, the 75th, which runs through May 28.

Knobloch is a pioneer in more ways than one. She'll not only be Cannes' first female president but the first "foreigner" to run France's most prized cinema event. That's significant.

The Berlin Film Festival has two non-Germans at the helm — artistic director Carlo Chatrian is Italian, executive director Mariette Rissenbeek is Dutch — but to have a non-Gallic boss in Cannes is something of a revolution.

Not that Knobloch doesn't know the French film industry.

The daughter of Holocaust survivor and former president of the Central Council of Jews in Germany Charlotte Knobloch, Iris Knobloch studied law in Munich and New York before spending 25 years at various executive positions within the European operations of US film studio Warner Bros., including 15 years as chair of the Warner Bros. France group. She eventually ended up running Warners' operations across France, Germany, Benelux, Austria and Switzerland.

Promoter of a film that became a critical and commercial hit

In France, Knobloch played a key role in lobbying Cannes to accept Michel Hazanavicius' "The Artist" for competition in 2011.

Many, particularly in the French industry, thought the crowd-pleasing black-and-white silent film was too mainstream to get a Cannes berth. But Knobloch prevailed.

"The Artist" was Cannes' hottest ticket that year.

The film's French star, Jean Dujardin, won the best actor award at Cannes.  and critical raves sent the movie on an historic awards run, ending at the 2011 Oscars where the movie won five awards including for best picture, best actor and best director.

Coincidentally, Hazanavicius is back in Cannes this year. His zombie comedy, "Final Cut," will open Cannes' 75th anniversary edition on May 17.

Knobloch's mainstream instincts, and her Hollywood connections — she only stepped down from WarnerMedia last summer — could be a major asset for Cannes, which has long struggled in trying to balance its imprimatur as the world's leading showcase of art house and avant-garde cinema with the necessity of bringing in big American movies and stars to pack its famed red carpet, attract paparazzi and generate buzz in the form of blogs and social media posts.

The Venice Film Festival, which last year featured the world premiere of Warner Bros. sci-fi epic "Dune," and included crowds of Italian fans screaming themselves raw over the sight of stars Timothee Chalamet and Zendaya, has arguably done a much better job of bringing in the Hollywood glam.

With Knobloch's Hollywood Rolodex, Cannes will be hoping to make it a regular occurrence.

When she takes over as president, Knobloch won't be directly picking Cannes' future lineup. That will still be the purview of artistic director and general delegate Thierry Fremaux.

But as Cannes president, she'll act as a go-between, balancing Fremaux's artistic demands with Cannes' deep-pocketed sponsors, who want as much glamour and bulb-flashing paparazzi moments as they can get.

There, too, Knobloch has an in. When she resigned from Warner last year, ahead of the company's merger with television giant Discovery, she launched a €250 million ($260 million) media investment company, I2PO, together with Artemis, the investment firm backed by French businessman Francois-Henri Pinault.

Pinault, in addition to being the husband of Hollywood star Salma Hayek, is also the owner of luxury goods giant Kering, one of the Cannes festival's official sponsors. Many believe the Kering-Pinault link was key in convincing the Cannes board to vote for Knobloch.

Knobloch's corporate connections have raised hackles in the French film industry, with some suggesting it would be a conflict of interest to have a Cannes president who is also an investor in film companies. Knobloch has pledged that I2PO will not invest in any film company with a connection to Cannes.

Those concerns aside, critics and fans agree that Iris Knobloch brings to her new job a deep knowledge of the entire movie business, from the corporate suite to the red carpet.

As Cannes' first female president, she's more than qualified to prepare the world's most important film festival for an uncertain future.