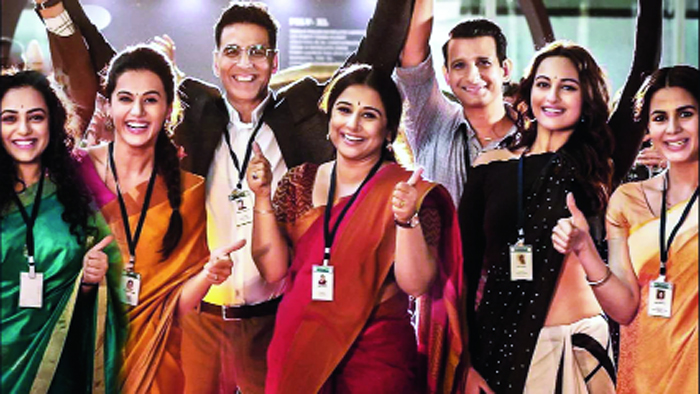 If the box office could smile, it would probably be laughing now.

Gone are the days when Rs 100 crore box-office collection of a film made news but as the Hindi film industry is now truly global with theatre releases and digital platforms streaming films post-theatre runs, Rs 200 crore collection seems to be the new normal. Some films, however, do not belong to any club and make their own space by raking in numbers never heard of in Hindi cinema before.

Here are some latest releases that have clocked surprising numbers at the box-office.

USP: First space film made in India on an Indian mission. The film ticks all boxes required for a good run at the box office. Advanced VFX, women leads, in-depth content, nationalistic ending. What more do we seek from a film made in such a needy budget.

USP: Anil Kapoor and Madhuri Dixit back together after 17 years. The duo, who had been part of some outstanding cinema in the past, were seen as a couple in Total Dhamaal again. Audiences lapped it up and made no bones of the poor script and half-hearted VFX.

Saaho
Still from the film

USP: Prabhas’s first release after the blockbuster Bahubali. This hype was enough to push the collection scales to a degree where the audiences are compelled to give it a watch at least once. In film parlance it’s called — FAN LOYALTY.

Kabir Singh
Still from the film

USP: A sleeper hit called Arjun Reddy. This Telugu hurricane had such an impact in the South that it couldn’t help take the entire nation by storm. It’s said that even the dissenters of the film watched it more than once. Now that’s called “no bad publicity”.

Bharat
Still from the film

USP: Salman Khan. Despite mixed reviews, this adaptation of Korean film Ode to My Father, a coming-of-age journey of Bharat, was a rare pick for Salman. Though the performances and direction were never questioned, the screenplay made enough dents. But whatever it was, this film managed to push sales and pull collections.

Uri: The Surgical Strike
Still from the film

USP: Right timing. The film released in January 2019 and in February, 40 CRPF jawans were killed in one of India’s deadliest terror strikes in Pulwama. Call it nationalism or anything else this film was an unintended surgical strike at a time when people wanted to know about the Indian defence force and its covert operations.

Super 30
Still from the film

USP: Sometimes taglines and hashtags do wonders. Super 30’s first teaser — Ab Raja ka beta raja nahi banega — was packaged and sold so skilfully that the middle class took an instant liking to the matt-finish Hrithik Roshan. The story on IIT coach Anand Kumar’s tutorial Super 30 was unique and real and so were the performances. Also, the film was tax-freed in eight states, giving the class of 2019 a thrust for a successful opening.