Advertisement
Home / Entertainment / Bollywood / You, the t2 reader, on why Hera Pheri is a cult comedy

You, the t2 reader, on why Hera Pheri is a cult comedy 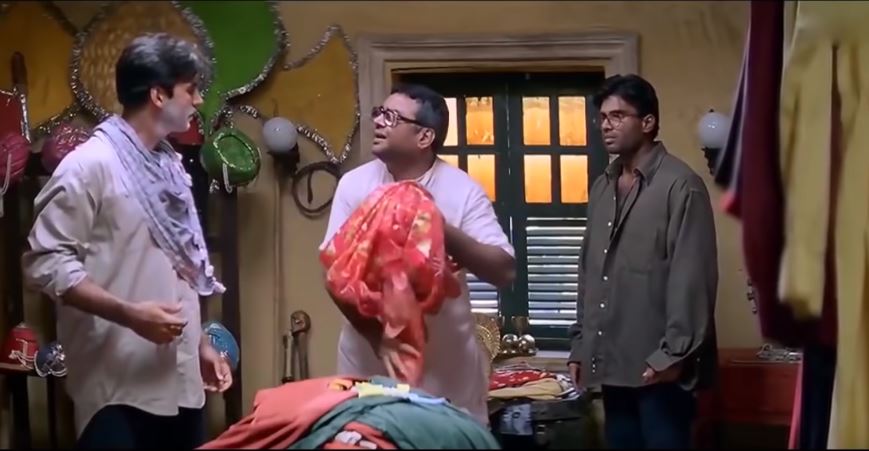 I think one needs to dig really deep into Hera Pheri to find reasons to not laugh. This movie is a comedy classic and makes me laugh every time I watch it. I remember watching it in my hostel with my friends and we couldn’t stop laughing. Hera Pheri is hilarious. Akshay Kumar’s humour and Paresh Rawal’s Babu Bhaiya can’t be replaced. Everyone, from the main cast to the side players, made this movie one of the best comedies in Bollywood. (I love Hera Pheri because… March 31)

I like Hera Pheri because of the following reasons:

Hera Pheri is the first comedy I remember watching. It is one of the best comedy movies of all time for many reasons:

Hera Pheri is a classic comedy which makes us roll with laughter. Akshay Kumar’s Raju, Suniel Shetty’s Shyam and, of course, Paresh Rawal’s Baburao made the film both lovable and laugh-worthy. What I liked the most was Baburao’s extremely funny voice and I really appreciate the talent and the effort that was put in by Paresh Rawal to speak in such a way throughout the film.

Priyadarshan has never failed to impress his audience. He brings the story of Raju, Shyam and Baburao and presents it to us on a platter coated with extraordinary humour, innocence and emotion. The story of Hera Pheri is relatable and is the tale of every Indian household where one fights and then cares for each other and celebrates friendship. It’s a film that will never get old and will continue to be in the hearts of Indian audiences forever.

There are very few films you can watch with your whole family. I have watched this movie (and its sequel Phir Hera Pheri) so many times that I know the lines by heart. I can see a still image from Hera Pheri and can say what’s happening in it and quote the dialogues too. This movie showcases all the emotions of the middle class… the character Shyam shows how a masters degree holder can also be jobless. Laxmi Chit Fund taught us about not investing out of greed. Babu Bhaiya taught us how sharing our sadness can reduce it. Raju taught us nothing but made us laugh.

I love Hera Pheri because it’s one of the most entertaining comedies in the history of Bollywood. The iconic characters of Shyam, Raju and Baburao never fail to entertain us. Some films never get old, and Hera Pheri is a never-forgotten film. Paresh Rawal’s performance as Baburao was so exquisite that we remember the film with the same feel after two decades. Even after so many years, whenever I watch the film, it feels as fresh as it was at release.

Hera Pheri is one of the cult creations of Bollywood. Humour, emotion, action, song, dance.. a full-on joyride. It gave us some memorable characters with the three main leads being iconic and tickling our funny bone with their comic timing and fabulous screen presence. No one can replace them or the movie.

According to me, Priyadarshan’s Hera Pheri is one of the best comedies made in Bollywood till date. Honestly, I just love every scene of the film. It is just wonderful to learn that the film has turned 20. There are actually uncountable reasons why I love this film so much. The story, the dialogues, the performances, the songs, the climax... in fact, everything about the film is superb. But for me, the main attraction is the character of Baburao, portrayed by Paresh Rawal. I think this movie can be watched over and over again only to watch the brilliant and hilarious acting of Paresh Rawal. As a big fan of Hera Pheri, I want to thank Team t2 from the core of my heart for publishing the fantastic write-up on this cult comedy. I enjoyed reading it.

I’ve watched Hera Pheri many times and it never seems to get old. If I’m having a bad day, this film instantly refreshes my mood. The screenplay is commendable and it keeps me engaged till the end, no matter how many times I’ve watched it. The dialogues are hilarious and I use a lot of them in my daily life. Paresh Rawal’s comic timing is unmatchable and his character, Babu Bhaiya, is my favourite. In addition to that, the number of memes the film has generated is uncountable.

Hera Pheri is a film that can be treasured in the archives for ages. Paresh Rawal’s Baburao, along with Akshay Kumar and Suniel Shetty, did wonders to give this film its cult status. The unadulterated comedy sequences don’t age, despite watching the film over and over again. Tabu, Om Puri, Kulbhushan Kharbanda, Mukesh Khanna and Gulshan Grover complete the gaps to make it one of the best comedies in decades. There can be no better comic timing than in Hera Pheri. A true masterpiece.

I love Hera Pheri because...

There are thousands of reasons to love Hera Pheri. I still remember my siblings and I fell from our chairs watching the fight scene in the garage. A good comedy requires perfect timing and the script has to be fresh and full of humour. It is one of the best comedy films ever made in India. And the best part is that even after watching it so many times, we still enjoy and laugh at the scenes and jokes.