The Telegraph reached out to some celebrities for their thoughts 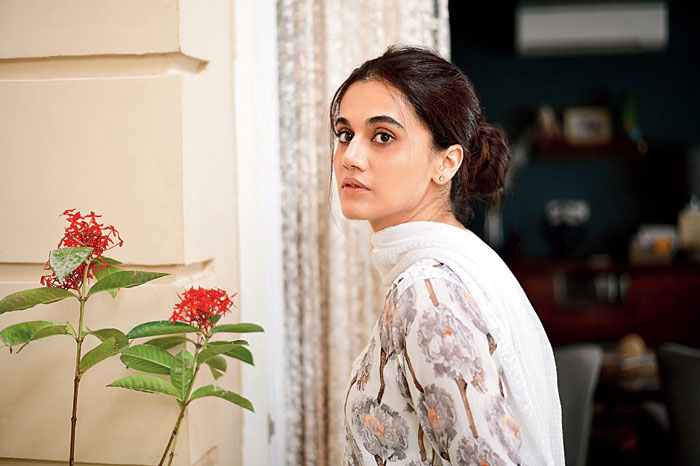 Anubhav Sinha has had some really strong films of late — Article 15 and Mulk — and so has powerhouse performer Taapsee Pannu. On Friday, audiences got a look at the duo’s second outing, Thappad. If their first film together, Mulk, was about a Muslim family trying to reclaim their lost honour, Thappad gives us a hard-hitting look of how “just one slap” can change everything in a marriage. Since its release, the trailer has clocked 30 lakh-and-counting views on YouTube. “Haan bas EK THAPPAD ..... par nahi maar sakta !” Taapsee tweeted while sharing the powerful trailer on Friday morning.

A couple of days ago, the actress had said: “I can say Thappad is this year’s Pink.” At one point in the Thappad trailer, one of the characters says: “When you’re truly in love, thodi bohut maar-pit toh expression of love hi hai na, sir!”

Is it? The film, releasing on February 28, stars Pavail Gulati, Dia Mirza, Ratna Pathak Shah, Tanvi Azmi and Ram Kapoor, as the lawyer, among others.

The Telegraph reached out to some celebrities for their thoughts.

I loved the trailer of Thappad! Domestic violence is a very relevant topic of conversation and from the trailer it seems that it has been dealt with in a mature and nuanced manner. I had loved Article 15 from Anubhav sir, and this looks equally exciting with a bunch of talented actors led by Taapsee Pannu.”

I liked the trailer. I’m a huge Anubhav Sinha fan and of his Article 15 and Mulk. So, I think I was expecting a little more but I’m still looking forward to the film. It has a good thriller factor.”

I was riveted by the Thappad trailer, yet it seemed so close to home. One has literally heard, sometimes even seen and heard these stories and they are everywhere in our society. It takes a lot of courage to face and address them in the way they have shown in the trailer. It’s a perfect address to the conversation which kick-started after last year’s Kabir Singh. Full marks to Anubhav Sinha for attempting yet another important dialogue through his art and for Taapsee to headline this.”

Since I already know the story of the film, I can tell you that it’s actually really empowering for women. I liked the trailer because it creates a certain intrigue without letting you know much about the story. I think it’s going to be an interesting contrast with a lot of the films we have seen in the past. Let’s hope that it’s a great film.”