‘There is no genre today that I will shy away from trying at least once. I have just started, ya’ 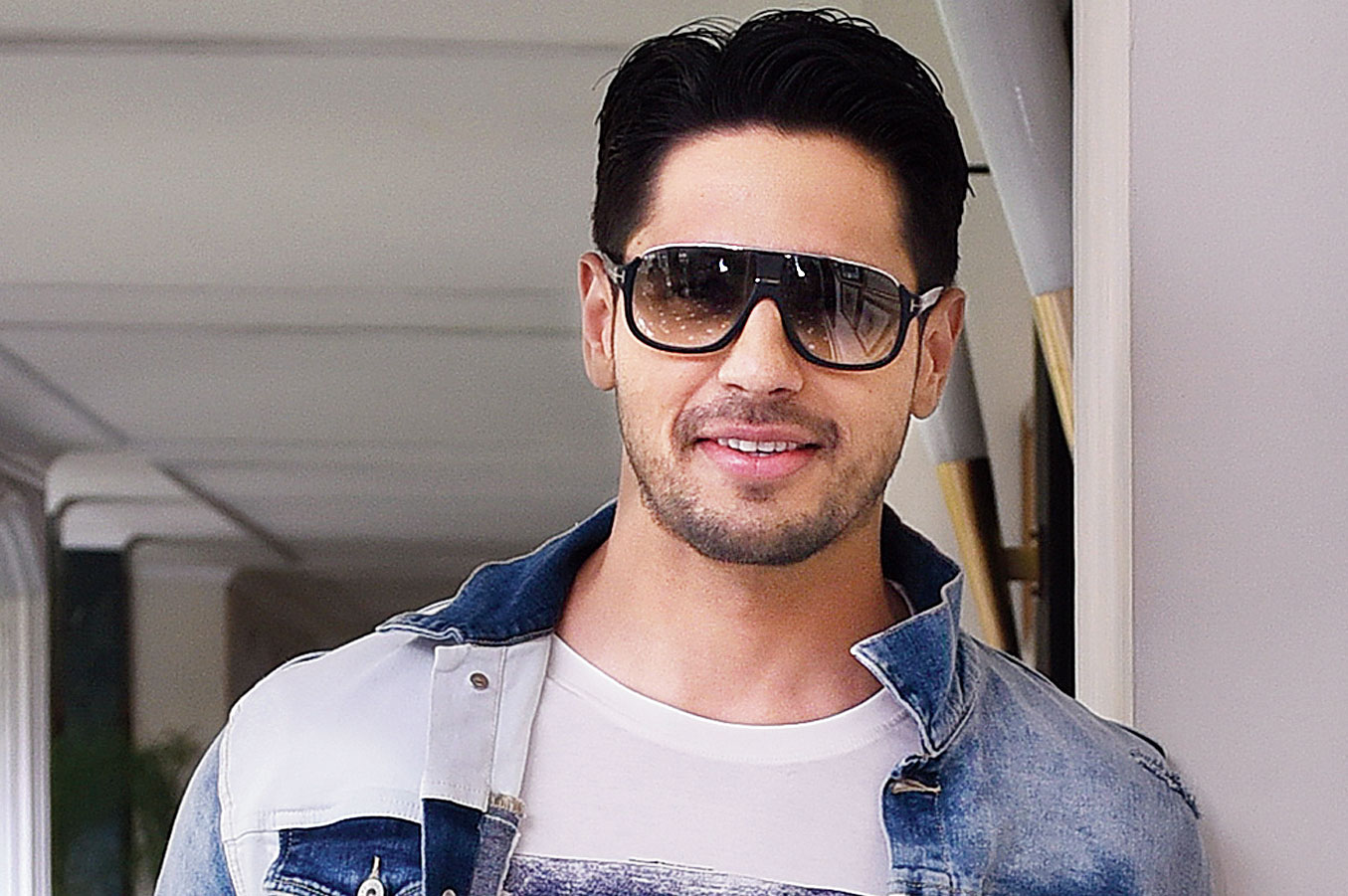 Sidharth Malhotra was lounging in the presidential suite at The Oberoi Grand on a recent Sunday morning when t2 dropped in for a chat. Sporting his trademark cool in faded denims and a matching jacket teamed with a white tee, the 34-year-old looker was his usual warm self, in between answering his texts and sipping on his coffee. Calcutta is not a city that the Bolly star often visits (he was here for an event for Pepe Jeans London, of which he’s the face in India) and he’s excited about making a film here some day.

“I haven’t ever actually shot a film in Calcutta. I really want to. Let’s see if I get a script soon and if the directors feel this will be the ideal location to shoot in, then great. I think I mentioned to you the last time we met about this Bengali movie shot in a train… Praktan. Such great writing. Some great stories are coming out of here,” smiled Sid as we sat down for a chat on fashion, films and some more.

‘Effortlessly cool’ is the best way to describe your style. How does Pepe fit in?

During my growing up years, I remember knowing Pepe as a very cool brand internationally. We always saw foreign faces representing it and I was very happy when they decided to have a face for the Indian diaspora and they chose me. It’s a brand I grew up with. They are really comfortable. I am not saying this because I endorse it but I have worn my Pepe denims on long-haul flights and even during stage performances. I can dance, jump around and sweat it out in them.

It’s an affordable brand. All college goers these days are very fashion-conscious and Pepe suits every pocket.

Do you remember the first pair of Pepe denims you bought?

I used to get hand-me-downs from my brother, who is six years older than me. Yes, younger sibling woes! (Laughs) I would keep waiting for the day when he would either throw away or outgrow his denims so that I could keep them for myself. He had a pair of Pepe jeans that I got eventually. So from there to here… who would have thought?

What drives your sense of style?

Fit and comfort are the primary factors. I like to dress down, generally, unless I am going for a formal event. I need to be comfortable, I need to feel easy in my skin, not try so hard. I don’t mind bright colours, but the basic fit needs to be spot-on.

You are a clotheshorse who looks good in anything you wear. What do you feel you look best in?

There’s no outfit that I haven’t actually tried on, at least once (smiles). I started modelling during my college days and have worn some obnoxious stuff from designers who I will not name! (Laughs) It was the time when everyone was experimenting and I was getting paid to wear those experiments, so I had to be professional (smiles). But I was largely comfortable, you know. It probably comes from being confident and being secure with who I am and how I look. I think I can pull off almost everything… casual wear, Indian stuff….

Any fashion faux pas from those days?

There’s this calendar shoot I did when I was 19 or 20, where I am dressed in all silver! (Laughs) There’s a picture of it somewhere online that I don’t even want to look at! I am wearing really, really tight silver-coloured shorts in that one and my hair is gelled up with silver paint (rolls his eyes and guffaws). If I wasn’t getting paid for that, I wouldn’t have been caught dead in those shorts. We were doing a body shot and there was a girl standing next to me who was also in tight-fitting silver swimwear. Sometimes I look at that picture and go, ‘Dude, what was I thinking?!’

Your last release Jabariya Jodi had you in colourful bandhni shirts, neon bandanas and white pants. That’s not something we have seen you do before, on screen or off it…

I thoroughly enjoyed it. The film is set in Bihar and consciously, I wanted my wardrobe to reflect the predominant style that prevails there. People there love their colours… even the interiors of their houses are full of colour. I just loved the prints I wore in Jabariya Jodi. My stylist Akshay Tyagi did a great job and I feel it’s one of my most memorable looks.

Which are your favourite looks from your films?

I still have the pair of denims I wore in my introduction scene in my debut film Student of the Year. I also have the sunglasses I sported in the song Kukkad kamaal da. In that film we were exposed to some amazing brands, all thanks to Manish Malhotra and Mr Karan Johar. That was our fashion school, though I had seen quite a few brands during my modelling days (smiles). But yes, Student’s styling is something I carried forward into my personal life as well.

The rest of my films have had pretty unique looks… whether it was Ek Villain or Brothers, where my style was grungy. Baar Baar Dekho had me changing my looks because it was a time-travel kind of a film. I think the closest to what I wear in real life would be my wardrobe in Kapoor & Sons. Shakun (Batra, the film’s director) told me before we started shooting, ‘Tu kya pehenta hai ghar pe? Just wear that’. So just tees, denims, hoodies….

Who have been your style idols?

In my younger days, I was very influenced by commercial Bollywood films. Shah Rukh Khan in those Polo T-shirts in Kuch Kuch Hota Hai was very cool. I was 12-13 at that time and like every Delhi boy, I thought I was a hero (smiles). But I had no idea where to get those tees from or that ‘Cool’ chain he wore in that film. My mum was a big Yash Chopra fan. I remember her getting those VHS cassettes of Lamhe and Kabhie Kabhie… I loved (Amitabh) Bachchan saab in those long overcoats in Kabhie Kabhie.

Who among your contemporaries do you think has the coolest style?

Someone who always pushes the envelope… Ranveer Singh. He wears some really out-there outfits and kudos to him for pulling it off. He thoroughly enjoys fashion and that’s how it should be. Someone whose style I really admire is Saif Ali Khan. He carries off suits very well and now he wears these really simple kurtas when he travels and looks so effortless.

Fashion to films. You have Marjaavaan coming up next month and it looks completely out of your comfort zone…

Absolutely! It’s a full-on massy entertainer. That’s what I have strived for in the seven years I have been in the business. I have tried to make films in different genres, none of my two characters have looked or felt the same. Marjaavaan (releasing on November 15) is a prime example of my will to experiment every time. It’s a film which is purely made for the audience, for the viewer who wants to walk into a theatre to watch sequences where he can clap and whistle.

Milap Zaveri (the film’s director) believes in the kind of commercial cinema that you and I grew up on… like Bachchan saab’s films or Sanjay Dutt or Sunny Deol. You know, the hero being the hero… protecting the girl, fighting the bad guys…. Somehow that influenced me and so many other kids of my generation — Ranveer, for example — to become Hindi film heroes (smiles). Marjaavaan has the quintessential definition of a hero and I found that very exciting.

So yes, the aim has always been to play different roles. Some have worked, some have not. It’s an ongoing process and the outcome in terms of box office is not something that I can control. I am not an active producer yet, so I can only contribute as an actor. I have thoroughly enjoyed exploring with my roles and there is no genre today that I will shy away from trying at least once. I think I am pretty confident as an actor today and even directors and producers see that in me. Let’s see what kind of scripts come my way now. I am excited… I have just started, ya (smiles).

Yes, I am just back from a shoot schedule in Kargil. It’s been very tough… see this (rolls up his jacket sleeve to show a bruise on his left wrist and winces). This is my gift from the mountains (smiles). No one’s ever shot in Kargil. Virgin locations… we were there at 12,000ft above sea level, recreating the Kargil War, recreating the army, recreating the ’90s. One doesn’t get to do war films these days, though Shershaah is a love story (co-starring Kiara Advani)-cum-war film. The story is very impactful… Vikram Batra gave his life for the country. Up north — be it Chandigarh, Delhi or his hometown Palampur (in Himachal Pradesh) — he is highly revered and respected. The script has a lot of power and the team has worked very hard to make the war sequences gritty. We shot on mountain faces that were angled at 70 degrees… we had an international action team as well as the army helping us. I think it’s authentic, entertaining and a heroic story.

Does the responsibility increase manifold when you play a real-life character and especially someone as heroic and inspirational as Vikram Batra?

When I meet his family, definitely. I have met them multiple times now, including his twin brother, his parents and sister. I went to their home, their mandir. We shot in Palampur. That’s when it hits you, you know… that what you are trying to portray on screen is something that these people have lived and it’s ended in tragedy for them. They didn’t even get to say ‘goodbye’ to him and that pain remains. We did extra homework on the script, we paid a lot of attention to recreating his life and bravery. But we don’t carry that pressure when we go on set because that will harm the film. We have a script and we have to work within the framework of that. I told his parents that we can only capture the essence of his life in a two-hour film and I hope they are happy when they see it.