Advertisement
Home / Entertainment / Bollywood / Kajol on being a part of Tanhaji...

Kajol on being a part of Tanhaji...

... And what makes her marriage with Ajay Devgn work 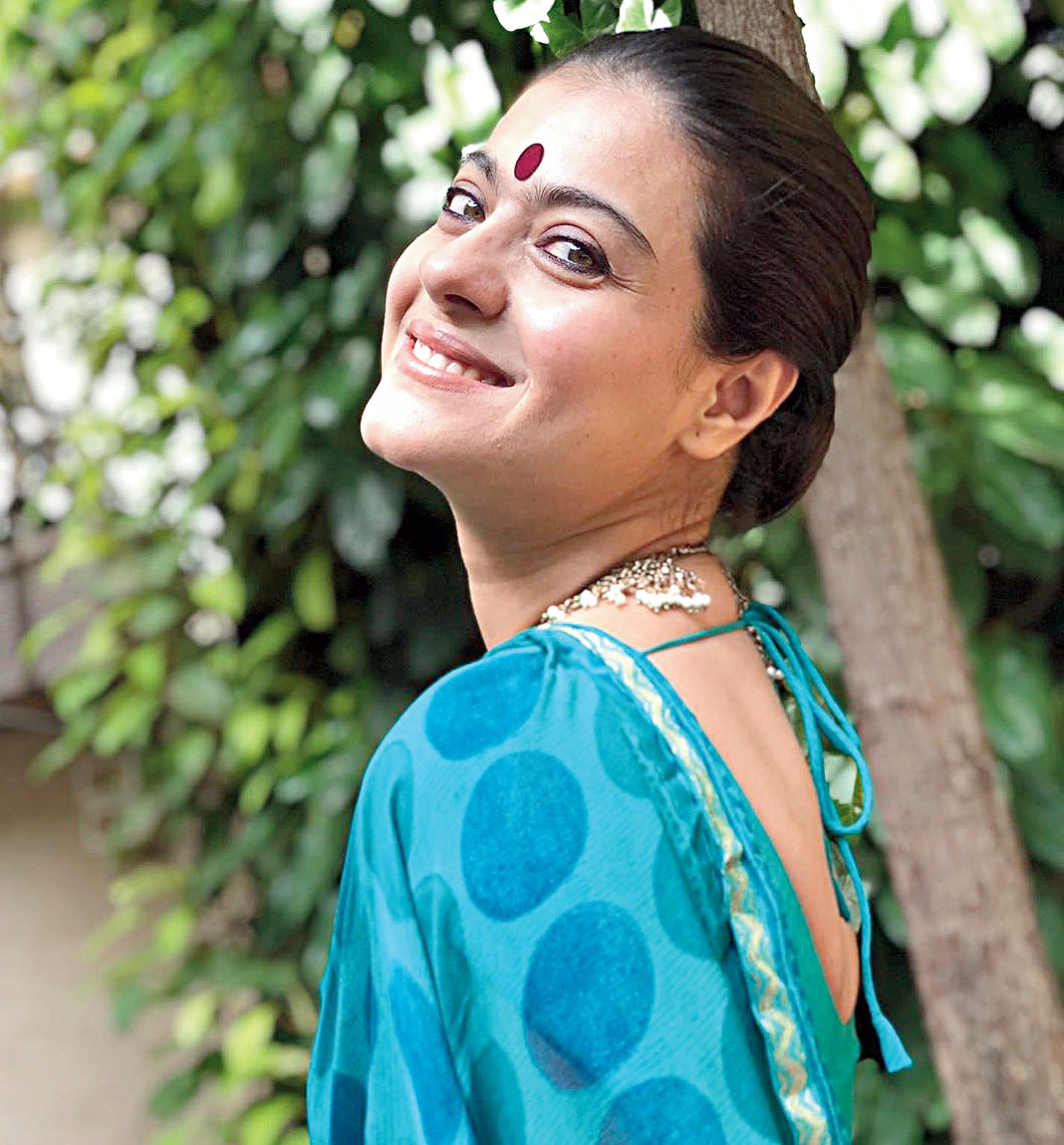 Year 2020 promises to be a big year for Kajol. She will be making her big digital debut with Tribhanga, a Netflix film about a dysfunctional family, directed by actress Renuka Shahane. But before that, we’ll get to see her on the big screen in Tanhaji: The Unsung Warrior — that hits theatres on January 10 — opposite her husband Ajay Devgn. Directed by Om Raut, the film is set in the 17th century and is based on the life of Tanaji Malusare, the military leader of the Maratha king Shivaji. Kajol plays Savitribai, Tanhaji’s wife.

Ajay and Kajol, who first met on the sets of Hulchul (she was cast after the untimely demise of actress Divya Bharti), have over the years worked together in more than half-a-dozen films. Recently, at the Sun-n-Sand Hotel in Mumbai, t2 chatted with Kajol on Ajay as a co-star and playing a Maharastrian character in Tanhaji.

This your first historical…

All of it seems like history to me! (Laughs) It is my first historical actually, I guess.

Did it feel any different to shoot for this one?

Definitely. The whole feel of the set, the feel of the film, wearing that nauvari (Maharashtrian sari)... there was a very Maharashtrian feel about it all. The sets really made you feel like you had gone back in time. Can you imagine a house without electricity and wi-fi? It’s terrible! (Laughs) You’re transported into a different time and you almost feel like a different person. I would look at myself every morning and go, ‘Oh my God!’ I’ve never felt so beautiful in my entire life.

It’s also a rare film where you identifiably play a Maharashtrian...

Yes. The last time I wore this much of a Maharashtrian look was probably my wedding!

Did that make you feel like you had a connection to the character?

I don’t know about that, but it definitely felt like I was going back to my roots. I actually posted this picture of my great-grandmother (Rattan Bai) and my mother (Tanuja) at my uncle’s wedding, and they’re both wearing nauvaris in that. My mother looked at me and said I was looking just like my great-grandmother, and I felt like I really did. We’re always in our jeans and

T-shirts in today’s times and we don’t feel like we really identify with our ancestors. You look at them and you wonder how they did things in those times. Somehow, wearing that sari and looking at myself in the mirror made my body language change. There is something about having that padar on your head, the nath and those bangles that changes your personality. There’s a weird magic that happens and you feel like a different woman completely.

This film is also releasing in Marathi. Did you dub for yourself?

I would have liked to but I couldn’t, because the accent that they use is pretty hard. It’s not the regular Marathi that we hear spoken around us. There are so many words that I would not even understand or use.

It’s Tanhaji’s story and it’s being said that you have a fairly short part in the film. What was it that made you want to be a part of it?

It’s a story about an episode in history and every one of these characters is drawn out brilliantly in a very wonderful way, including Saif’s (Ali Khan, who plays Tanhaji’s nemesis Uday Bhan) character. What drew me to this character — and when people see the film, they’ll understand where I’m coming from — is that there is so much wonderful depth and an undiluted strength. We all say we’re strong people but we don’t really know our strength till we’re tested. We don’t know how much we can bear till we’re thrown into a sink-or-swim kind of situation. And we actually see her in that kind of situation and she comes out shining with all her dignity and grace intact. That’s what I found really amazing about her.

There’s a lot of anticipation because it’s you and Ajay working together. Did he ask you to be a part of it?

Yes he did because he said he couldn’t see anyone else doing this character. He said he knew there was a certain honesty and strength that only I could bring. And I wanted to do it, I wanted to play a totally Maharashtrian character. I knew it would look fantastic, I knew that it would be shot well and my scenes would be really good. Otherwise, he would not have offered it to me in the first place.

You’ve worked together multiple times and he’s also directed you in U Me Aur Hum. What is he like as a co-star?

He’s actually a fabulous co-star. He is what he is on screen as well. When he’s playing the part, he’s also watching you because he’s still a director at heart. So, there is still a part of him which is in a very weird way, directing you. He’ll tell you when he thinks you need to do another shot, or he’ll tell you when he thinks you can add to something, change stuff or make it better. Yes, you have your own judgment of how you want to play something, but there is that comfort of knowing that there is someone standing opposite you and making sure that it happens.

In an old interview, you talked about your first impression of Ajay from the first time you worked together in Hulchul. You said you saw him and wondered, ‘Who’s this guy and what kind of personality does he have?’

(Laughs) I’m still wondering. Why he’s so quiet? Why doesn’t he talk a little more?

In all these years, has he changed as a person?

I understand him a little better. When he’s quiet, I know he’s thinking. I also know what he’s thinking about now. That’s the only difference, honestly. He’s probably grown as a person, as a man and all of that but his basics remain the same.

This year, you celebrated your 20th wedding anniversary. What advice would you give people on sustaining a successful marriage?

I genuinely believe that every relationship goes through phases and the most important thing is for both people to want to go through it. That’s what matters and you have to realise that it’s daily work. Every day there is that much energy and work that you’re putting into it. There are some days when you are tired of it and you just want to wash your hands off all of it. But you wake up the next morning and realise that there is some part of you that wants to work at it and you continue. I read about a couple who were married for 60 years and when asked about it they said, ‘We come from a time when if something was broken, we tried to fix it. We didn’t throw it away’. That’s pretty much what I believe about most relationships as well. Nothing is perfect, nothing is unending and fantastic all the time... that only happens in books.

You are making your digital debut in 2020. Do you feel there’s been a bit of a revolution in how we make our movies and tell our stories with the advent of streaming content?

I think it’s given us a lot of creative licence. It’s given us a lot of freedom and liberty without censorship of any kind, societal or otherwise. That has been good for the entire creative side of filmmaking. The cons are that we have some absolute shit coming out as well. Overall though, the good stuff is really, really good. India is coming out in a very strong way on this platform and it’s something we can definitely look forward to.

Are you someone who binges on shows?

I’m not a big viewer. I was never a big film viewer either and I don’t watch much television either. For one, the remote is never in my hand. So, TV is out. Online, I watch a little of what I want to, but it’s time bound. So, I like watching short stuff, maybe one episode of a series. I may never finish the series but I will watch an episode here and there while I’m working out.

Have you seen anything lately that’s caught your eye?

I watched the first season of Sacred Games, loved Made in Heaven... that’s really about it. I loved Sherlock and Elementary as well. I like crime-based shows.

It’s been a bittersweet one. It’s been a long year and I wouldn’t say that I’m unhappy for it to end and for a new one to start.