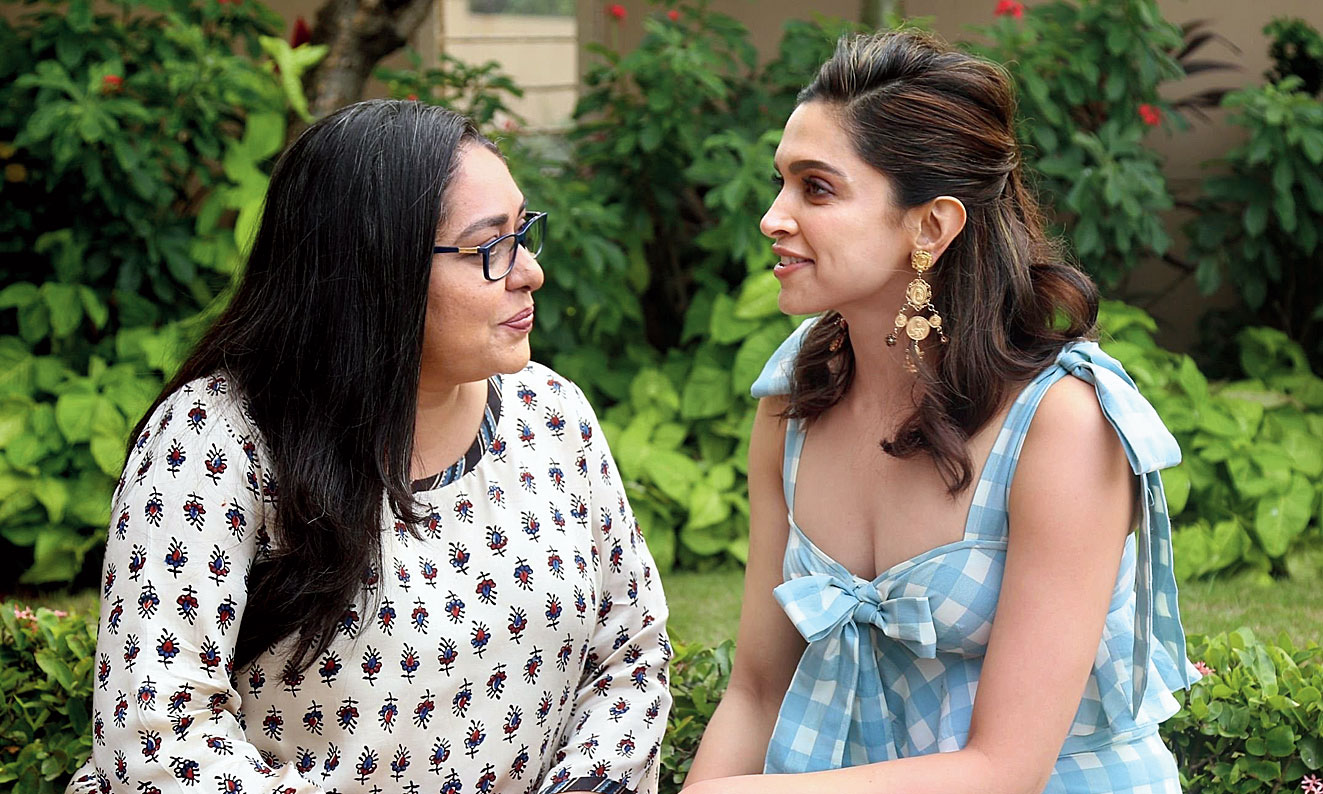 After the runaway success of Raazi, filmmaker Meghna Gulzar’s back with another story that revolves around a feisty female character. Starring and co-produced by Deepika Padukone, Chhapaak is charts the life story of Laxmi Agarwal, an acid attack survivor. Laxmi, a resident of Delhi, was just 15 when her stalker attacked and threw acid on her. Laxmi founded the Stop Acid Sale campaign and received the International Women of Courage award in 2014.

Chhapaak also stars Vikrant Massey as Amol, a character inspired by Laxmi’s real-life partner and social activist Alok Dixit. Over a car ride from Juhu to her home in Pali Hill in Mumbai, Meghna spoke to t2 about the kind of stories that call out to her and why she thought Deepika would be perfect for the role.

I wrote this after Talvar (2015). I was looking for subjects on what to make next and also wanted to have a bank of scripts. Talvar was my first film on a real-life thing (the Aarushi Talwar murder case), and I really enjoyed doing it, so I was looking at something from real life again. I scanned newspapers and noticed that incidents of acid attacks were being reported quite frequently. That got my attention and I wanted to find out more about it. The minute you search for acid attacks, Laxmi pops up. There was a realisation that this was something quite rampant, but not in the public consciousness the way it should be. It’s always in the background somewhere, despite being as rampant, horrific and violating as rape. That really was the starting point.

At what point did you think of casting Deepika?

It’s a very peculiar story. While we were writing it and doing our research and Laxmi was sharing her story and photographs, we saw pictures of her before the attack. If you see Deepika’s pictures from when she was 20 and Laxmi before the attack, the physical similarity between the two is uncanny. For me, that physical similarity was the first consideration to cast a character. Both my co-writer Atika Chohan and I had this secret wish which we would never express because we never thought it would happen in a million years. Anyway, we wrote the script and I went off to make Raazi.

When I came back, the Sam Manekshaw project (starring Vicky Kaushal) had come into the ether and I was supposed to start working on that. The closing of that script got delayed and I realised that getting it on the floors was going to take a lot longer because it’s an extremely complicated film. So, I decided to focus on Chhapaak instead because it’s closer to home and in the world of Talvar. On a lark, I asked for a meeting with Deepika and at that first meeting, she said ‘yes’. I just feel that when these decisions are spontaneous, they’re the best. It happened with me on Filhaal, on Raazi, on Talvar and then on Chhapaak.

How closely involved was Laxmi with the project?

I first reached out to her to ask her whether she was okay with me doing this. Once she said ‘okay’, we cut off from her and did our own research and built our own structure based on information available in the public domain. One needs objectivity while doing that. Then we brought her down and for two-three days, were holed up in my workspace. She would talk and I would just record. Both Atika and I already had a structure in mind, so basis that, if we felt like we needed any clarifications or more details, we asked questions. Otherwise, we just let her talk. Once that happened, we realised there were other key players that we needed to speak to. There was her father’s employer who was very helpful financially for her medical and legal aid. There were others like her plastic surgeon and her lawyer. So, we started meeting all these people.

Once the script was ready, I shared the screenplay treatment with her and she was okay with it. And then I showed her the completed film, and she loved it.

It must have been strange for Laxmi to see her life story on screen...

It’s very peculiar for me as a filmmaker, and my last two films have been on true lives. I know the Talwars, I’ve spoken to his brother and his wife, their cousin who writes for Toronto Star and I know what they feel about the film. But I’ve never had the courage to ask Rajesh and Nupur Talwar if they’ve seen it and what they think, because that’s just cruel. With Sehmat (on whose life story Raazi is loosely based), I obviously never had the opportunity to meet her or interact. But here I was watching Laxmi watching Malti (Deepika’s character in the film). It was surreal. And she was reacting... laughing where she was supposed to, choking up where she was supposed to. It was extremely gratifying as a filmmaker.

Why did you decide to give Deepika’s character a different name?

We’ve fictionalised everybody’s names. The film is in the realm of true life and there are other characters that make an appearance during her time with the NGO when she first met Alok Dixit. They met other survivors, some of whom are no longer alive. So, it just felt neater to fictionalise everybody.

Many directors of films with a female protagonist talk about finding it hard to cast the male lead. You’ve made two such films in Raazi and Chhapaak. Was this your experience as well?

Not really. I always knew I wanted Vicky (Kaushal) in Raazi. What’s important is knowing the ground reality when you have a powerful female character and a female

A-lister leading your cast. If your female character is leading the film, it’s natural that the male character isn’t the lead... then cast accordingly. It doesn’t mean that they’re lesser stars, but always cast as per the character. For example, Vikrant’s character is supplementing Malti’s character, it’s not leading Chhapaak. I have to be aware of that and honest to that, and honest to the actor I’m going to. And then it’s their decision. It doesn’t make Vikrant a lesser star.

What was it like for Deepika when she saw herself with prosthetics for the first time?

It was surprising because she looked in the mirror and said, ‘I feel like myself’. She now says, ‘That’s when I realised I had found my character’. What is interesting is that the prosthetics didn’t transform her, she became the prosthetics... which is a far more immersive process for an actor.... to integrate into the character. It was very exciting to see that.

What was your brief to Deepika on how you wanted her to play Malti?

At the prosthetic level, we knew that we didn’t want to make Deepika look like Laxmi. We wanted her to look like if she, god forbid, had been disfigured in an acid attack. There were few markers we picked up which are Laxmi’s, like her hair is on one side or the way her skin transplant has been done, but otherwise, Deepika was to be Malti. In that there were very little in terms of instructions that I had to give her. When we would do readings, her interpretation was almost exactly how I had visualised it. I just had to sometimes give her a rough framework within which to operate, that’s it.

You’ve worked on stories that have their roots in reality. What is the most important thing that you need to keep in mind while telling these stories, especially when you know the person concerned will be seeing the film?

Your intent behind making the film. Are you exploiting, are you trivialising, are you wanting to make a controversy, do you want to initiate a scandal? Or do you just want to tell the story? It makes all the difference.

Do you see a thread in the kinds of stories that call out to you?

I think there’s an element of the strength of the human spirit in all my stories. The characters are extremely righteous, almost aspirationally role models. I also feel that they’re extremely powerful as stories, whether they’re about incidents, events or books. That’s what draws me to them.

Have you found your voice in terms of the kind of work you want to do?

I think times are now easier for me because the audience’s viewing preferences have changed. The kind of content we’re making is being accepted, it’s working and producers are backing it. Having a successful film behind you, of course, makes things easier. That was a difficulty after Filhaal because it wasn’t commercially successful. For me personally though, my stories are only getting more and more complex and challenging. It’s not like my job is getting any easier. It does make me push myself and gives me an opportunity to keep honing my craft. Otherwise, one would stagnate.

This is also your first film as producer. Why was it important for you to take on this role?

I wrote this back in 2016, with no actor or studio attached. It’s something we’ve nurtured personally from meeting Laxmi to engaging a writer, doing the research and developing a script. It’s a very delicate subject to continue to be able to remain close to it through the process of script to film, it was important to take on this role of co-producer. We just wanted to safeguard the intent and the vision that we started with.

When will you start shooting Manekshaw with Vicky Kaushal?

In 2021. I need a year of prep on that one. It’s an immense one, not just in terms of scale and budget. The amount of work that’s going to be required for it is mammoth in terms of the era and the things we have to create.