50 years of Roop Tera Mastana: Love, desire and all that jazz

Playing since 1969, this Aradhana song is still sizzling 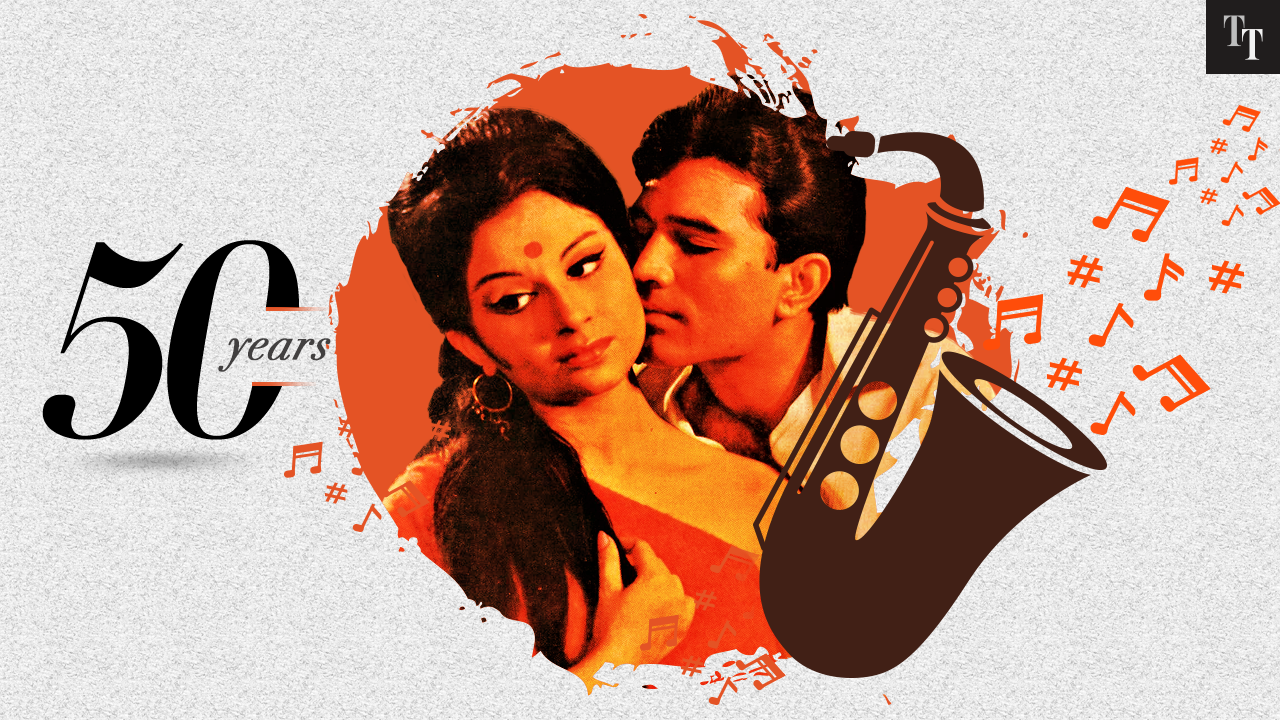 A toofan struck Hindi popular cinema 50 years ago, and made an entire nation bechain with desire. The song Roop Tera Mastana burnt up Indian film screens on September 27, 1969, redefining the depiction of sensuality in a Hindi film song.

It featured in the blockbuster Aradhana, directed by Shakti Samanta and starring Rajesh Khanna and Sharmila Tagore. The film that made Khanna an instant sensation also gave a fresh lease of life to singer Kishore Kumar. The singer, who had fallen under the shadow of the mighty Mohammad Rafi, was back in the limelight with this song, which marked the beginning of a long association with Khanna.

Tagore recalls how Aradhana broke the mould of Hindi popular films at the time — featuring a woman who is unapologetic about her pre-marital pregnancy and a father who supports her. “It had a very different kind of story. There was no rona-dhona, there was just acceptance,” she says. Roop Tera Mastana appears at a pivotal point in the narrative.

Vandana (Tagore) and Arun (Khanna) get caught in a rainstorm and have to take shelter in a cabin. Arun keeps his wet, but unbuttoned, shirt on, while Vandana changes into a towel — a really long, bright orange towel — that is wrapped around her. A fire (real and metaphorical) burns as the song plays from an adjoining room. The scene makes the couple’s sexual desire apparent, and it is after this song that Vandana finds out she is pregnant — a revelation that sets the course for the tragic turn her life takes.

In his book Bollywood Sounds: The Cosmopolitan Mediations of Hindi Film Song, Jayson Beaster-Jones points to the “cooperation of music, lyrics, and cinematography in creating a series of powerful images that evoke the emotional states of the characters”. Roop Tera Mastana, he adds, “heralded many of the changes that would take place in the music and films of the 1970s and ‘80s”.

The song broke new ground by being shot in one take. The camera placed on a trolley circles the couple, as they go round the fireplace, in a mimetic representation of a Hindu wedding ritual). They throw smouldering looks at each other, coming close but not quite, aware of the “bhool koi humse na ho jaye”. The shot lends a breathless feel to the sequence, mirroring the emotions of the couple as they struggle to come to terms with their longing. The technique, however, was not deliberate. “The set was committed to somebody else by the producer, so we had to finish the song. There was shortage of time, so Shaktiji decided that he will do it in one take,” says Tagore. The lead pair rehearsed extensively with the crew and nailed the song in the second take.

Tagore believes the striking chemistry between her and Khanna that became the cornerstone of the song was a result of the situation in which it was shot. “We couldn’t really move too much. It had to be around that fireplace…. It was the situation that dictated how we did (the song). We were just looking at each other, and the intensity kind of built up because there was no other movement. The total concentration was on the two people, and there was nothing else.” The passivity of the couple, as it were, ignites the passion that blazes across the screen.

Even as the song articulates the couple’s tumultuous longing, it uses some of the tropes Hindi cinema has used to figuratively depict sexual desire— fire, thunder and lightning. But they are only background props, made to create a mood.

Before Roop Tera Mastana happened to Hindi cinema, and after, film songs in India largely relied on semantics and symbolism to evoke eroticism. There are countless Hindi songs where sex is implied through shots of birds, bees, flowers, fire, waves or lightning. The lyrics were more explicit, though. In Aaj Sajan Mohe Ang Lagalo from Pyaasa (1957), for example, Geeta Dutt articulated a woman’s desire for physical intimacy, couched in divine allusions. She sings about a woman’s hriday ki peeda (pain of the heart) and deha ki agni (fire in the body) — bold words for a puritan post-Independence India. But the picturisation of the song is completely devoid of eroticism. The deha ki agni burns only in the words.

What Roop Tera Mastana did was make the fire spill on to the screen through the actors’ eyes and body language. The eroticism in the song lies in the possibility of sex rather than the sexual act itself. Tagore says because there was not much happening in the song, the viewers ended up with some agency — they had to work their imagination. “There were just the two people in the shot. There was nothing else, but your imagination. The audiences bring their own imagination (when they watch the song). They could fill in the blanks themselves. There was nothing explicit. They could put in their own thoughts.”

What spurred those thoughts on in their wild run was the construction of the song.

A crescendo of passion

S.D. Burman has been credited with composing the Aradhana soundtrack, but in Roop Tera Mastana, it is only the tune that is his, the rest has been created by his son R.D. Burman. While the song was being recorded, S.D. Burman fell ill and had to be hospitalised. Tagore says: “Rahul Dev Burman brought a different kind of energy into the song. Had S.D. Burman composed the music, I’m sure it would have been different.”

R.D. Burman turned his father’s folksy tune into a mélange of jazz and samba — two musical forms rooted in eroticism.

Tagore recalls that when she saw the song for the first time, she was “amazed”. The song was shot under so many logistical restrictions that neither the actors nor the director was aware of the magic they were creating. There were no monitors, “so Shakti couldn’t even know that it’s all come out well”, Tagore says.

She adds that the song, along with the film, “has had a long shelf life, and I think it will continue because it speaks to different generations”. It speaks to them of forbidden love in a manner that Hindi film songs have struggled to match. The overtly sexual depiction in today’s film songs has robbed them of the ecstasy of imagination that Roop Tera Mastana stirred through suggestion.

The toofan is still raging, 50 years on.