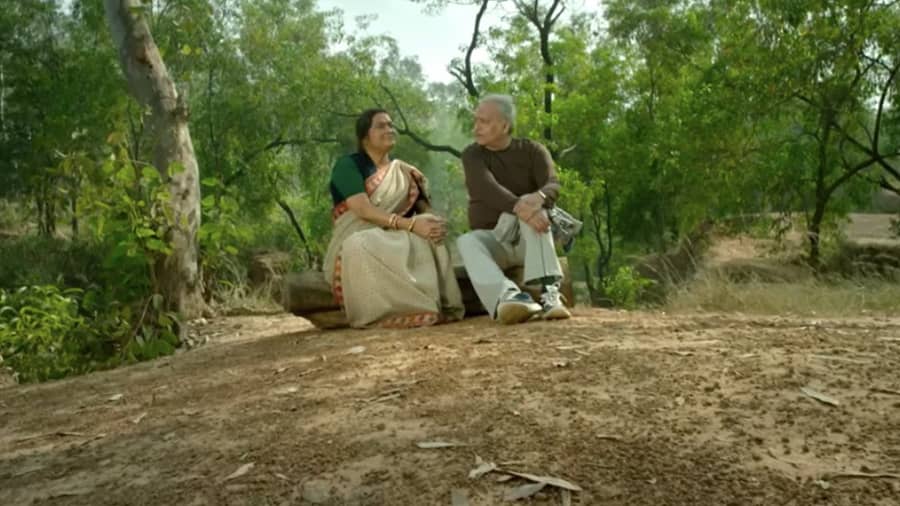 The makers of Belashuru, starring the late Soumitra Chatterjee and Swatilekha Sengupta, released a new song – Bhalobashar Bhitte – on Wednesday, taking music lovers and cinephiles for a walk down memory lane.

The Bhalobashar Bhitte track is part of a series of songs and snippets that the makers of Belashuru have been dropping since the film’s release on May 20 and kept the netspace abuzz.

On June 27, a crossover of the Obhabe Kano song from the 2015 film Belaseshe was released on YouTube. The original was sung by Anupam Roy. The Obhabe Keno crossover stitches together several scenes and acts like a bridge between the two narratives of Belaseshe and Belashuru, leaving a lump in the throat.

On June 26, the makers of the two films released on YouTube a compilation of special moments of Soumitra and Swatilekha. Swatilekha passed away about a month after the release of Belashuru on May 20.

Directed by Shiboprosad Mukherjee and Nandita Roy, Belashuru revolves around an elderly couple – played by Soumitra and Swatilekha – who grapple with the ravages of  time and loss of memory.

Other than the powerhouse performances of its lead actors, Belashuru  has been garnering rave reviews for his music. The Tapa Tini song, sung by Iman Chakraborty, Ananya (Khnada) Bhattacharjee and Upali Chattopadhyay, has been a top draw, especially with a video of Monami Ghosh and the crew of Spicejet Airlines grooving to it going viral on social media earlier this year.

While the Tapa Tini hook step challenge had cast members like Rituparna Sengupta, Anindya Chatterjee and Monami shake a leg, fans too could not hold themselves back from participating. Here’s a compilation of behind-the-scenes and making of the popular song released that was released on June 28:

Tapa Tini was an instant hit among netizens on its release on April 9. It has fetched 90 lakh views on YouTube so far.