B’day present for Soumitra: A biopic

Parambrata on Abhijaan, a biopic on Soumitra Chatterjee’s life 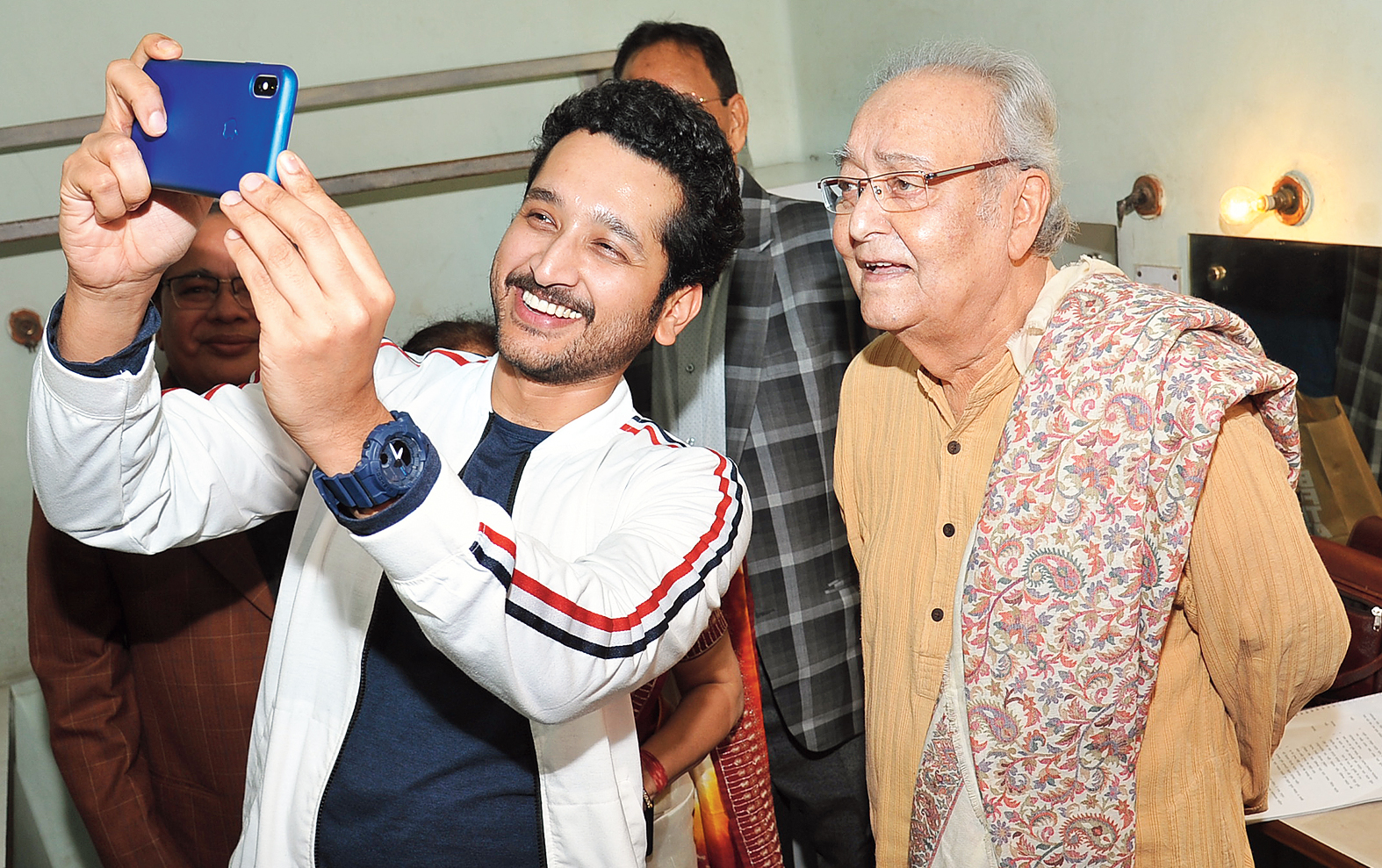 This film is our tribute to him, to somebody who is the last of the living intellectual icons for Bengalis. I think that he is the person who taught us the idea of behavioural performance in Bengali cinema — Parambrata
Picture: Chanchal Ghosh
Published 03.02.20, 08:42 PM

A birthday cake was cut and amidst cheers the quintessential Happy Birthday song was sung by Parambrata Chattopadhyay for veteran actor Soumitra Chatterjee on January 19. What came up as the icing on the cake for both Soumitra and his fans alike, was the announcement of a biopic on Soumitra Chatterjee’s life, Abhijaan. Soumitra will play himself at his age in the film and Jisshu Sengupta will essay the role of a younger Soumitra. We caught up with Parambrata for a chat on Abhijaan, for which he has donned the director’s hat and will also be seen in a special role.

What was the starting point for Abhijaan? How did it come to be? What are the aspects of his life that the film intends to portray?

The starting point was this offer from my co-producers and this doctor who is a resident of New Jersey who has been in charge of translating Soumitra jethu’s prose works into English, so they came up with the idea that something like this might be thought of... and they shared the thought with me. And once they did, I took a good two-three months to decide whether this can actually make for an exciting proposition. And slowly I reached the conclusion that yes, Soumitra Chattapadhyay’s life can be viewed, can be seen from a certain perspective, not just as a film actor that everybody in Bengal knows.

He has had a very interesting career graph, has a very interesting personality as well. Also, he is known mostly as a film actor. There are layers to his artistic persona which also a lot of people know about but they are as important as his film actor persona. He’s a poet, playwright, stage actor... a political person.

Put together, I realise that he is somebody whose interest as an artist has crept into many different forms and not just been restricted to film acting. So, the aspects that the film would intend to cover, would not be that of Soumitra Chattopadhyay as a film actor but Soumitra Chattopadhyay the poet, the stage actor, the playwright and his take on the idea of being an artiste, his definition of being an artiste.

Soumitra Chatterjee has had an illustrious body of work on celluloid. What are your memories of watching him on screen and even knowing him personally as Soumitra jethu?

For people like us who have grown up in a household which is sort of an urban middle-class, intelligent or intellectual household, we got exposed to Soumitra first, even before Uttam Kumar actually, through Feluda, through Charulata. Soumitra was for us, for my parents’ generation, the thinking man’s hero always. I mean, there was this debate about Uttam and Soumitra... and the people who are more artistically inclined would tend to say Soumitra and the others would say Uttam, although you can’t really generalise like that. Uttam Kumar was a fantastic actor, one of the best that the country has ever had. But yeah, Soumitra Chattopadhyay, courtesy the kind of films he predominantly did, has always been considered an intellectual hero of sorts.

By the time I was nine or 10, this man was part of my everyday diet because I was either watching Sonar Kella or watching Joy Baba Felunath, Hirak Rajar Deshe, Charulata, Jhinder Bandi, so, for me, this was the guy, this was the man! (laughs) Then when I started working as an actor, the first day that I met him, many years ago, about 15-16 years ago, I still found it difficult to believe that I was actually sharing the screen with this gentleman! Today we share a good rapport, we appreciate and admire each other and I understand that he is quite fond of me. So yes, I do realise that this is one of those relationships that I will always cherish.

How do you look at his craft of acting?

This film is our tribute to him, to somebody who is the last of the living intellectual icons for Bengalis. I think that he is the person who taught us the idea of behavioural performance in Bengali cinema, and that is something really worth learning from his body of work.