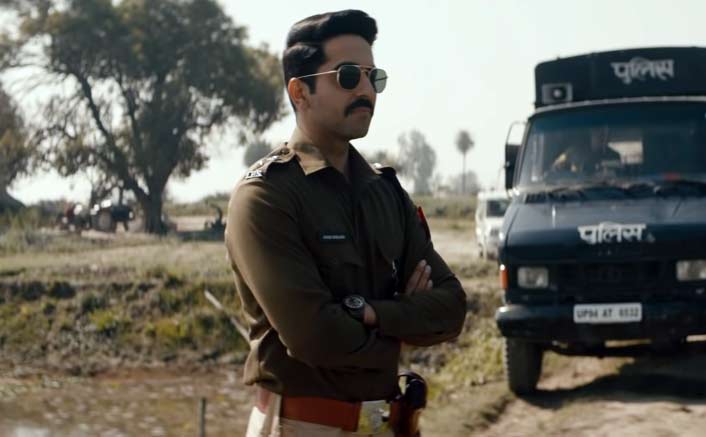 Ayushmann Khurrana plays the role of IPS officer Ayan, who is investigating caste murders in a small town
A still from the film
Jai Arjun Singh   |   Published 02.07.19, 03:12 PM

Khurana’s trademark qualities – likable boyishness verging on callowness but making way for sensitivity– have been well suited to certain roles (films like Vicky Donor and Dum Lagaake Haisha pivot on his character’s initial immaturity and gradual coming of age), and Article 15 continues that tradition. Casting him as an Anglicised (and Brahmin) protector who will help make things better in the hinterland raises questions similar to the ones about “white saviours” in Western literature and film. But while there should always be discussions about representation and prisms in any social-issue film, one should also note how Ayan repeatedly moves outside his comfort zones, and does it not with “heroic” swagger but as a regular person who slowly grows in understanding.

From his first appearance, where he drinks water bought from a Pasi community, the film is full of scenes where he ruptures the existing order by entering spaces that are not meant for an upper-caste man: from a dirty marsh to an outhouse used for skinning animals, to a hiding place in the jungle. He forces himself to see, to confront discomfiting things – and to look into the mirror by association.

At the same time, Article 15 is aware that Ayan will never have to face the consequences that those who “transgress”from the opposite end of the social pyramid do: when a lower-caste man tries to rupture spaces that are not meant for him – by entering a temple, for instance – he is savagely beaten up, or murdered, or made to watch the women in his family being gang-raped, or all of the above.

One scene has Ayan asking junior cops about their caste and his own, and doing double-takes as he learns how many different ways there are of being low-caste or Brahmin. On one level, this scene is low comedy, encouraging us to roll our eyes at all this complicated madness. But there is also an important subtext: Ayan – and we – have the luxury of laughing patronisingly, or feeling superior through our ignorance of these subcategories; but the other people in the scene don’t have that luxury. This is part of their existence, and their lives depend on whether they follow age-old rules and proscriptions.

I have no Homeland,” BR Ambedkar said to Mahatma Gandhi at their first meeting in 1931, “No self-respecting Untouchable worth the name will be proud of this land. The injustice and sufferings inflicted upon us are so enormous that if we fall prey to disloyalty to this country, the responsibility for that act would be solely hers.”

Images of Ambedkar and Gandhi feature in Anubhav Sinha’s powerful film Article 15 – as in a scene where portraits of the two icons flank the desk of IPS officer Ayan (Ayushmann Khurrana), who is investigating caste murders in a small town. But Ambedkar’s no-punches-pulled declaration finds its strongest echo when a low-caste man named Nishad (the wonderful Mohammed Zeeshan Ayub) responds to the idea that he is being too rigid in his activism. People like us are patronisingly called Harijans, he replies, but we never get to be true “Jans” of the country, the ones included in “Jana Gana Mana”.

To watch this scene in a multiplex (and in a climate of nationalistic fervour, where both Bhimrao Ambedkar and Nishad would doubtless be marked “anti-national”) is to be reminded that just before the film began, everyone in the hall was obediently standing for “Jana Gana Mana”. This includes viewers who feel the warm glow of patriotism and belonging – of “jana-ness” – in their hearts, while staying blind to the savagery of caste oppression, how deeply it is woven into this country’s fabric, and to the many small ways in which all of us are complicit: from keeping separate glasses for domestic staff to thinking of caste as an aberration that exists only in isolated pockets and has nothing to do with the religion that sanctified it.

For the privileged viewer capable of some empathy, the impact of a film like this – about brutal crimes visited on low-caste people because they asked for a three-rupee wage increase– is also closely tied to the knowledge that one has bought tickets at Rs 400 or more, and is consuming overpriced beverages and snacks.

More than once, while watching Article 15, I thought of Arundhati Roy’s essay “The Doctor and the Saint”, originally published as an introduction to a 2014 edition of Ambedkar’s Annihilation of Caste. The Project of Unseeing, Roy writes, “sometimes comes from a place of such rarefied privilege that caste has not been stumbled upon, not even in the dark, and therefore is presumed to have been eradicated, like smallpox.”

A key to understanding this film, and how well it does what it does, is to recognise that its point of entry is that of a privileged person whose world – as far as caste is concerned – is secure. Ewan Mulligan’s stygian cinematography and Mangesh Dhakde’s creepy, insistent background score combine to give Article 15 the texture of a tightly knit psychological horror film – an apt creative choice, given its protagonist and his journey. Deeply naïve in some ways, exchanging astonished messages with his girlfriend, the foreign-educated Ayan may be a policeman in charge, conscientious, ready to shake up the status quo – but he’s also like an innocent in a horror film stumbling on a dark swamp and not realising at first what is going on.

And this raises a question that Article 15 touches on in a wry but pointed exchange. “Sab baraabar ho jaayega toh raja kaun banega?” someone asks. The obvious answer to this – voiced in the film – is “why do we need a king at all?” But as the many subdivisions within the caste system suggest, the need to proclaim oneself “above” someone else (even if one also knows what it is like to be oppressed) may be a very human impulse, and one that is not easy to siphon out through new-fangled ideas about democracy and justice. A story told early in the film – about a village voluntarily in darkness because that makes Lord Rama’s palace look even more well-lit– suggests that people are often complicit in their own servitude, partly because they can’t imagine how the world would function without a king (or God) to rule over them. Even if oppressed people break their shackles and overthrow a despotic ruler, won’t a new sort of despotic ruler rise from amidst their ranks?

In other words, Article 15 deals with subject matter that is bleak and hopeless; it is also unflinching in its depictions (or descriptions) of the violence that may be visited on the powerless; and yet, remarkably, this is in essence a hopeful film, one that believes things can be meaningfully improved – while also saying that the first big steps may have to be taken by those who already have a measure of power.

In this, it is unlike many of the other major films we have had about caste: films like Ketan Mehta’s Bhavni Bhavai (which, like Article 15, raised the question of what happens to human excreta if manual scavengers go on strike), or Nagraj Manjule’s Fandry and Sairat, or Govind Nihalani’s Aakrosh. (Think about the fate of Lahanya Bhiku’s sister in the last scene of that film – and then think about the tenderness with which Ayan and his girlfriend Anita speak with another young girl, Amali, who is a victim in comparable circumstances.) This sort of cinema – built on the fear that there is no light at the end of the tunnel – is perfectly valid, but Article 15 aims for something trickier: to be at least somewhat accessible to a multiplex-going audience, complete with a charismatic lead, some facile humour (e.g. the misunderstanding around Ayan’s use of the word “fuck”) and an ending that – though not exactly “happy”– provides a sense of justice on a minor scale.

Is that enough? Not for the millions in the real world who are facing tyranny every day. But if a mainstream film manages to sensitise a few viewers to the plight of “yeh log” (as lower-caste people are dismissively referred to early in the story), and to see them as “jan” like us, that’s no small achievement. 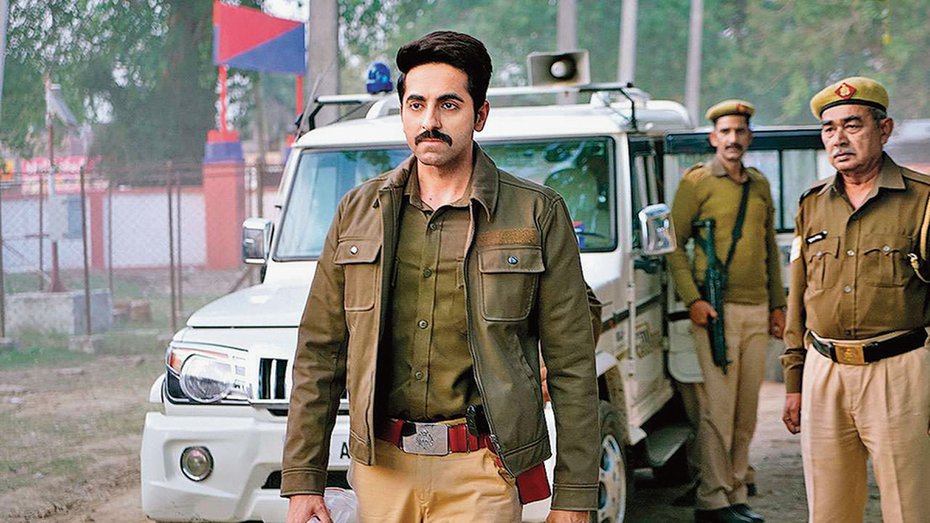 Khurana’s trademark qualities – likable boyishness verging on callowness but making way for sensitivity– have been well suited to certain roles (films like Vicky Donor and Dum Lagaake Haisha pivot on his character’s initial immaturity and gradual coming of age), and Article 15 continues that tradition
A still form the film