Arjun Rampal gets candid about his latest series 'London Files'

The idea is not always to do something different, it’s about getting one’s voice heard even when doing the so-called conventional stuff, says the actor 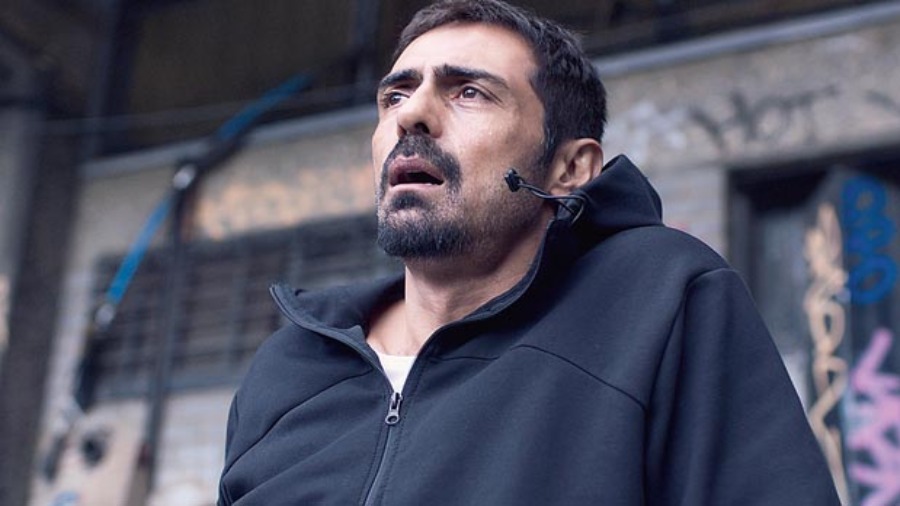 After foraying into the web with projects like The Final Call and Nail Polish, Arjun Rampal now stars in London Files. The series stars the handsome actor as a detective who is thrown into a complex case, which makes him question his own beliefs and motivations. Also starring Arjun’s Rock On!! co-star Purab Kohli, London Files premieres on Voot Select on April 21. The Telegraph caught up with Arjun, who has films like Dhaakad and The Rapist up for release, for a chat.

What is it about London Files that spoke to you?

I believe it’s quite different from anything that’s out there right now. What drew me to the character (Om Singh) is that he’s not the normal kind of detective. He’s quite dysfunctional, he’s got problems, he’s got his own issues, he’s quite flawed. It’s the case that keeps him together, and through the case, he thinks he will be able to find himself as well. He’s extremely complex and hence translated into a great character to dive into.

This show also deals with very important issues which are very relevant today. Topics like technology, the highs and lows of social media, the way communication gaps have happened between generations.... The relationship between a parent and a child has changed tremendously in today’s times. It’s a thriller with a very interesting case. It also deals with the immigrant issue, with an eye on the Immigrant Bill that’s being passed (in the UK). It’s also kind of dystopian in a way. We increasingly have countries locking people out.


What drew me to the character (Om Singh in London Files) is that he’s not the normal kind of detective. He’s quite dysfunctional, he’s got problems, he’s got his own issues, he’s quite flawed. It’s the case that keeps him together, and through the case, he thinks he will be able to find himself as well. He’s extremely complex
-


How did you prep to play this complex man?

It’s an entirely fictional character and the idea has been to make him as believable as possible, some of which I have drawn from my own experiences. In a way, I feel everyone will relate to him. I have tried to create an environment for a character like him to play in and thrive in. I tried to cut myself off and stay within the space of the character. It was quite a dense character to play.

The web has ushered in career 2.0 for you. But given the huge flow, even content on streaming platforms is increasingly becoming banal and repetitive. How do you ensure you pick projects that are potential clutter-breakers?

The web, for the large part, has really allowed me to experiment and explore as an actor. One can be bold enough to do content that’s different from perhaps what the boundaries of cinema offer. The choices I make on the web, as well as the films that I am doing, have to strike a chord with me. The idea is not always to do something different, it’s about getting one’s voice heard even when doing the so-called conventional stuff. I always look to work with people who I share a similar wavelength and mindset with. Synergy is important for me. When that happens, then the process of creating something becomes very exciting.

Sometimes when I get a great script, I always take care to see how it’s going to be treated, how is it going to be shot, how the character will be set up, how is he going to behave, how is he going to look... that’s the fun part, that of creating the character. Sachin Pathak, the director of London Files, came in with a very clear approach and is very strong with emotions. To get people invested in a show, whatever the genre, an emotional connect is very important.

What was it like reuniting with Purab Kohli, who you made the two Rock On!! films with?

Purab is so much fun! He’s a great guy. I was so happy when I was told that he had been cast in London Files. I was happy to see how much he’s grown as an actor. He has gone out there and done some great international work.

I like how he’s broken away from living life the way we live it in India. He’s pushed the envelope and done some great work. He was in the latest Matrix film (The Matrix Resurrections, 2021) and though it was a small part, it’s really commendable. Going international has made him evolve as an actor. What he plays in London Files is not an easy character, and he’s pulled it off really well. Our camaraderie off camera helped us immensely while making this show.

The one thing that I have learnt in life is to never be judgmental. Social media has a lot of positive things about it, but there is a lot of negativity too, and it’s up to you what you want to choose. One

You stated early on how this show focuses on the chasm between generations, one of the parameters being social media. What does social media mean to you and how do you use it differently in comparison to your daughters Maahika and Myra?

They use it for completely different purposes and my aim of using social media is totally different (laughs). I more or less use it to promote my work and to connect with people who I have known for a very long time. They are so savvy with it, and I am not at all. I can’t get my head around it.

But I am never judgmental about it. The one thing that I have learnt in life is to never be judgmental. To each his own, and that’s okay. Social media has a lot of positive things about it, but there is a lot of negativity too, and it’s up to you what you want to choose. One needs to find one’s space on social media and steer clear of it, at least for a while, if it’s impacting you negatively. It’s very new and we have to give it time and see where it finally lands up.

You have some interesting work coming up, of which Aparna Sen’s The Rapist looks very promising. What was it like making that film?

The Rapist is a very special film made by a very special director. Sameer Nair (of Applause Films, one of the producers of the film) always does a wonderful job with the kind of content he puts out. It’s a very sensitive film and has a totally different approach to the crime of rape, very different from what one is used to seeing. I haven’t watched the film (co-starring Konkona Sensharma) yet. I will be most probably watching it for the first time in Kolkata... the film is slated to be screened at the Kolkata International Film Festival (in end April). I hope I can make it there.

A chat with Aparna Sen on her latest film The Rapist