Directed by Ben Stiller and Aoife McArdle, the show asks us to read the fine print before signing up to be lab rats for zillionaires 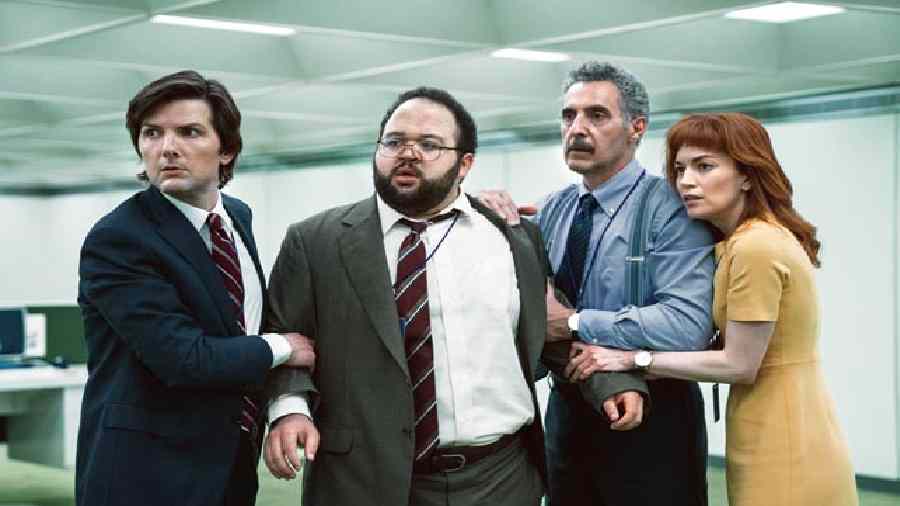 Robert D. Putnam, a political scientist at Harvard University, had put forward in his book from 2000, Bowling Alone (developed on his paper from 1995), a message that is appearing more hard-hitting today. Civic engagement — it’s about engaging with the neighbourhood, different groups, clubs and even political participation. But something was off, Putnam pointed out. People were bowling, America’s favourite passion, more than ever before but not as much as with their family or friends, they were bowling alone. Lively conversations over beer and pizza that organised bowling leagues once fostered had declined. In the last two years, we have been working together but alone. We are failing to find consensus even over smallest of issues because we are caught in bubbles of our own.

Here comes the Apple TV+ psychological thriller Severance — directed by Ben Stiller and Aoife McArdle, created by Dan Erickson — which has already been renewed for a new season. The show is a commentary on how corporations exploit workers while marketing ideas of family and company and ultimately trapping employees into watertight compartments. It’s what modern isolation is all about.

Lumon Industries, a megacorporation that dabbles in a little of everything (“What don’t they make,” one character asks), bisects a group of employees into “innies” and “outies”. Employees who work on a certain floor of the company are made to undergo a process called severance, which is an operation to separate personal and work lives. “Innies” — the personas created when the procedure is complete — experience their existence when they are physically inside the Lumon office, while “outies” are the employees’ original personas who volunteered for severance; they have no recollection of what “innie” does at work all day.

When an employee clocks in and the elevator reaches a certain floor, the work self or “innie” becomes conscious. When it’s quitting time, the out-of-office self or “outie” takes over and goes home with no recollection of life on the job.

Sounds great? There’s no longer a need to balance work and personal life, no hassle of bringing work home while weekend is bliss without having to worry about Monday? It’s a nightmare!

The retro-minimalist office has nice guy Mark (Adam Scott), who has just inherited responsibilities from former team leader Peter (Yul Vazquez), who has suddenly disappeared (and has a very important role in the series); Irving (John Turturro) is a stickler for rules, subsuming his identity to corporate culture; Dylan (Zach Cherry) is the cynical jovial man; and, there is Helly (Britt Lower), the newcomer. Keeping a check on all the workers on the severed floor is Seth Milchick (Tramell Tillman).

The situation is messy from get-go when Helly wakes up on a conference table unable to remember anything (“Am I dead? Am I livestock?” she asks. A voice (of Mark) on the speaker informs her that she is there by “her” own free will. “Her” is the “outie” version, whose permission Helly needs for her to quit the job. Here’s the dilemma: The “outie” is separated from the “innie”, so each time the latter asks the former for permission, it is denied because everything seems to be fine at home.

The problem doesn’t end there. Mark lives next door to his boss, Harmony (Patricia Arquette) but by the time Mark meets her, he is not in office and doesn’t remember who she actually is. So Harmony knows what Mark is doing all the time or who’s visiting Mark’s home, even if it’s the former team leader.

Britt Lower’s Helly Riggs wakes up after the “severance” procedure

There’s no subtlety when it comes to how employees view Lumon’s founder, sort of a cult-like fandom that may surround someone like Elon Musk. The employees at Lumon don’t know how bad things are. Mark took the job to get over the pain of losing his wife, to get those eight hours when he doesn’t think of her. He and his colleagues use those eight hours to find “scary” numbers on a highly baffling grid.

The show comes across as terrifying for three reasons. First, the retrofuturistic set-up, including the computers, twisting hallways that add to the confusion and the Break Room, which is more of a psychological torture chamber. Second, every character ends up playing two roles — “innie” and “outie” because of their altered brains; nobody knows the full story. Third, viewers watching the show are themselves living in a very strange world.

Before the pandemic, many large corporations offered toys or perks to employees so that they forget what’s on the outside. These are offices packed with games, round-the-clock food, massages and sleep pods, and so on (“Just say the word and I’ll get you a coffee cosy literally right now,” supervisor Seth tells Dylan). Employees suddenly found themselves at home enjoying all these “perks” minus the tension of commute and office politics. Who likes to travel three hours a day to get a personalised coffee mug with the best coffee beans?

We see Chinese finger traps in Severance; it’s a metaphor for this corporate perk culture. These finger traps are popular among children — woven finger tubes into which fingers are inserted and then pulled to tighten the tube; only when the hold loosens can one remove the finger. These finger traps are both a reward for doing the work and a subtle reminder that it’s no use fighting the Lumon system and to stop questioning the corporation to be free.

After working from home for two years, many employees are realising that small perks are no substitute for fair pay or benefits. Lumon bosses treat their employees as children, offering “perks” to the innies to stop them from even asking “What do we do in here?” Among the best perks at a big corporation are tables full of food, which is also seen here. In the second episode, the team is treated to a “melon bar” which has small cantaloupe and honeydew balls served inside carved-out melon bowls. In another episode they are treated to an “egg bar” of hard-boiled and deviled eggs. These are food that excites children and the “innies” of Lumon are treated like kids, untainted by the outside world.

Employment level is still low across the globe and as businesses are trying to go back into top gear, the attitude of potential employees are the same as that of those at Lumon — a growing suspicion. These last two years have unlocked the potential in many to look at a life beyond corporate work culture.

Lumon Industries, we find, was founded in 1865, the year the American Civil War ended. The quote that rings through the first season is that of the company’s current CEO James Eagan: “History lives in us, whether we learn from it or not.” And Mark’s boss Harmony takes this point further to deliver a truth that we often overlook as we go about work: “My mother was an atheist. She used to say that there was good news and bad news about hell. The good news is, hell is just the product of a morbid human imagination. The bad news is, whatever humans can imagine, they can usually create.”

Severance is reflective of the self-destructive decisions we often make, forgetting what’s actually important beyond monthly pay slips, forgetting there’s life beyond work. How much are we willing to sacrifice for work? Innie-Mark tells innie-Helly: “Well every time you find yourself here it’s because you chose to come back.” The show asks us to read the fine print before signing up to be lab rats for zillionaires.

Severance is streaming on Apple TV+

Employees of a certain floor at Lumon Industries are made to undergo a severance process, a procedure that separates their memories of their time at office from their memories of everything outside. So the characters have two versions. The “innie” Mark is the head of the data division while the “outie” Mark is grieving over the loss of his wife. Helly’s “innie” doesn’t like working for Lumon but her “outie” made her sign up for the severance process. Her “outie” is Helena Eagan and this identify is crucial to the show.

There is a room on the “severed” floor where one employee feeds milk to a bunch of baby goats. It hints at a deeper symbolism, perhaps about how Lumon tries to nurture its employees the way they deem fit.