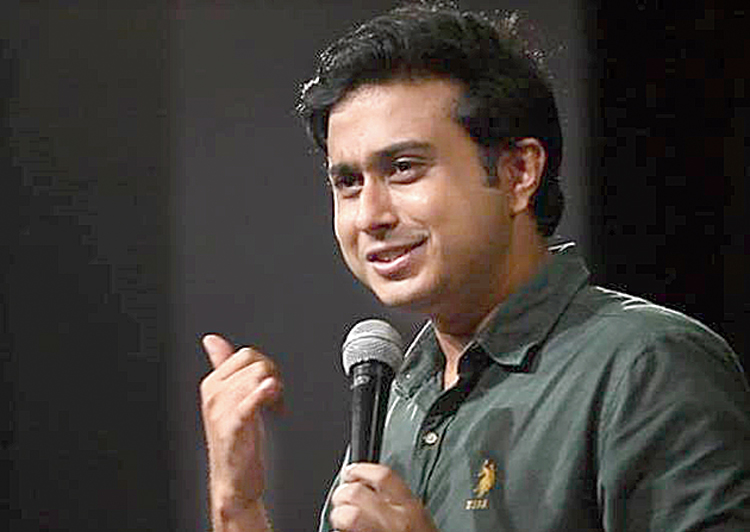 The man’s wit is as on point as his quips on politics. Headlining the recent Kolkata Comedy Festival, Anirban Dasgupta spoke to The Telegraph about the Calcutta scene, the power of stand-up comedy and what he has been up to all this while. Excerpts...

You’ve perfomed in Calcutta, Mumbai and plenty of other cities in India. How is performing in Calcutta different?

Not much of a difference because the kind of people who come to our shows are pretty much the same everywhere, either college students or young corporates. So that way it’s the same. However, the numbers are less here (Calcutta). Mumbai, Delhi and Bangalore have a culture of people going out to watch stand-up comedy, which is still not there in Calcutta. In Calcutta, only if a well-known comedian comes then people think of going to a stand-up.

A lot of your jokes deal with politics and you have this no-holds-barred approach when you’re dealing with these topics. Is stand-up comedy, according to you, a good outlet to start a discussion?

I think it is a pretty powerful outlet but it also has consequences (laughs). It totally depends on how I feel. The last couple of years the stand-up I was doing was extremely political because I was in that frame of mind. But now I am a little distraught with the political scene (laughs). And I don’t feel like talking about politics any more; for the next year I’ll be working on other stuff. It totally depends on what kind of year I’m having and currently, I don’t want to do politics for a while. However, I have some plans for one complete show on politics which I want to develop after some time.

Now that you’re not writing any political stuff for a while, what are the topics of your stand-up sets nowadays?

I’m just talking about very trivial and silly stuff (laughs). Stories about my friends from school, college and office. Like I said, I’m moving away from politics for a while because if I’m also continously getting bothered by politics then I will never be in a frame of mind to be able to think clearly. I’ll always be frustrated. Because you go on Twitter nowadays and within five minutes your mood is off (laughs) and I don’t want that to happen to me.

While performing on stage how do you gauge your audience to understand which jokes are working and which are not?

Every comedian has a bunch of testers, or certain jokes that tell you what kind of audience is present and what kind of jokes will work that night. For example, if I have to test whether my audience is receptive to political jokes, I’ll do a one-liner and see their reaction. So, mostly those decisions are taken on stage. If you see that the audience is not responding to a certain set of jokes you switch the set immediately.

Do you think humour is an effective tool to highlight certain issues in society?

Absolutely. It’s a very, very powerful tool. You can reach out to so many people online with it. However, that is not the primary aim of stand-up comedy. The primary aim is to just be funny and to entertain everybody. But then again, any form of art can influence your opinion, can make you talk about a subject but that’s not its primary objective but a very positive by-product.

How do you deal with hecklers and trolls?

Dealing with hecklers is very easy but dealing with trolls is not (laughs). When somebody heckles, chances are you will benefit from it. Let’s say, you’re on stage and somebody decides to heckle, the audience gets irritated too. So, most of the time when someone heckles, chances are that the heckler will get taken down. And it actually ends up benefiting the comic on stage, an unintentional benefit. I personally enjoy when it happens because it gives me chance to get an easy couple of laughs. If you say anything at that point, people will laugh. But trolling is a bit more difficult to deal with because it pops up when you’re doing regular stuff. Like, you’re eating and then somebody just abused you online. That’s just unnecessary and spoils your mood.

We haven’t seen any new content in a while and you’ve been quiet on YouTube too. What is in store for your fans?

I’ve created a full-fledged web series that will come out on Amazon Prime Video. It’s called Afsos and will be a black comedy. So, the last year was spent on just working on the show. I’m the writer and the show runner. I’ve written it with another writer from Calcutta, Dibya Chatterjee, and Sourav Ghosh too. So, that’s what kept me busy all this while, no YouTube, no specials. It’ll take some more time, at least six more months.