Advertisement
Home / Entertainment / An exciting movie marathon on the cards

An exciting movie marathon on the cards

Big Bolly and the biggest stars are all set for a ‘virtual movie date’ with you, courtesy Disney+Hotstar 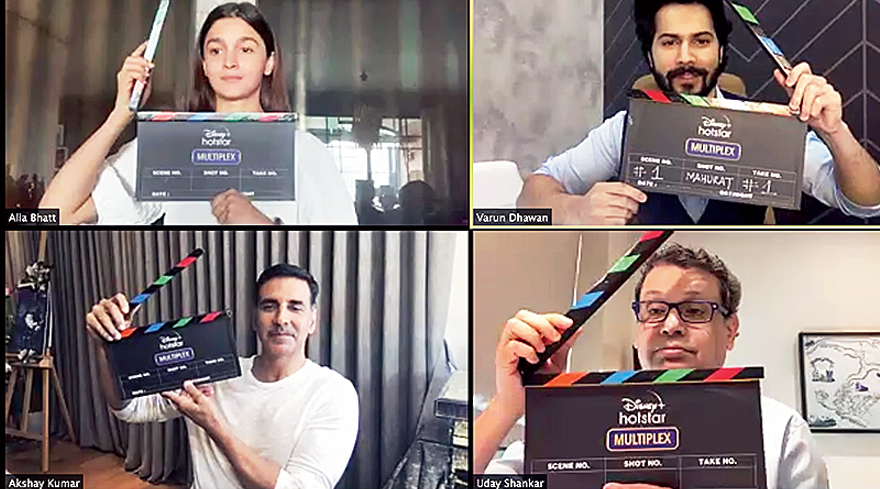 You can choose your show timing. You can choose your interval. You can even choose your movie munch.” If anyone needed any hard-selling in the movie theatre vs streaming platform debate, trust Akshay Kumar — widely regarded as an actor with one of the shrewdest marketing brains in the business of show business — to rise to the occasion. Akshay’s much-awaited Laxmmi Bomb, that was billed to be the blockbuster Id release this May alongside Salman Khan’s Radhe, before Covid-19 came calling, is possibly the first big-ticket film to bypass the uncertainty of a theatre release and stream directly on digital.

The game-changing move was revealed by the Khiladi himself through a virtual announcement on Monday evening, in which he was joined by several stellar members of his fraternity, all of whom will have their films premiering on the same streaming platform — Disney+Hotstar — over the next few months.

“In these strange times when the world is having to sit at home, it shouldn’t be deprived of entertainment. It’s with this goal in mind that we have decided to make good on our promise of #BollywoodKiHomeDelivery,” said Shankar. The first film to premiere on the streaming platform will be Dil Bechara on July 24. The Bolly adaptation of the Holly weepie The Fault in Our Stars will be the late Sushant Singh Rajput’s last film (Shankar billed the premiere as “a tribute to Sushant”), with the rest of the other titles, including Vidyut Jammwal’s Khuda Haafiz and Lootcase, with Kunal Kemmu spearheading the cast, all set to be premiered between July and October.

“With people being locked inside their homes for months now, the demand for entertainment is at an all-time high. The least we can do is keep the bandwagon moving and ensure that premium content is delivered,” said Devgn, whose Bhuj, co-starring heavyweights like Sanjay Dutt and Sonakshi Sinha, plays out against the backdrop of the India-Pakistan war of 1971 and has the actor slipping into the uniform of an air-force officer.

Akshay, sporting a salt-’n’-pepper look, described Laxmmi Bomb, a horror-comedy in which he plays a transgender character and co-stars with Kiara Advani, as his “passion project”.

“I am happy that the film, that I have been wanting to make for years, is going to be watched extensively on a platform as big as this,” smiled Akshay, revealing the Raghava Lawrence-directed film’s fiery posters. But the actor, who reminisced about his childhood memories of watching movies with his family at a suburban theatre in Mumbai, did confess that “movie theatres have the first right over a film”.

A new lease of life

That was, however, countered by Shankar of Disney+Hotstar who said that digital platforms will give films “a new lease of life. Premiering films on streaming platforms will no longer be a short-term, strategic tactic. This will be a big leap for the film industry,” he added. This was echoed by Devgn who said that the virtual premiere of films will be a “healthy alternative” to the theatre experience because only a limited number of films can be released every Friday. “A growing number of avenues to premiere films will only result in the production of more content,” he added. He also described the move as “a virtual movie date”.

For Alia, Sadak 2 is a “homecoming”, given that she’s been directed by dad Mahesh Bhatt for the first time, in what will mark the latter’s return to the director’s chair after two decades. Alia described Sadak 2, co-starring Aditya Roy Kapur, as “an extension” of the 1991 original film. “I am a newcomer to the franchise, given that almost everyone else (Sadak 2 has Sanjay Dutt and Pooja Bhatt returning) has been a part of the first film,” she dimpled, sporting her new short haircut. That, of course, prompted Varun, armed with a wicked smile, to goad Alia to reveal the name of her hairstylist. “I will tell you later, otherwise everyone else will line up in front of my hairstylist’s house for a haircut!” laughed Alia. Those keeping an eye on Alia’s Instagram account will know that it’s beau Ranbir Kapoor who’s gone snip-snip on her tresses.

Bringing up the rear was Abhishek Bachchan, who has recently completed 20 years in the industry and is soon set to make his web debut with Season 2 of the thriller series Breathe. In The Big Bull, co-starring Ileana D’Cruz, Abhishek plays controversial real-life stockbroker Harshad Mehta. “It’s a busy time, it’s an exciting time and I am looking forward to this new model of making and releasing movies,” said @juniorbachchan.

With Varun around, there were, of course, a few laughs to be had. The young actor, whose May film Coolie No. 1 is now in limbo, couldn’t stop pulling friend and co-star of many films Alia’s leg. Akshay made everyone chuckle, revealing what’s been keeping him busy during the lockdown. “I play cards with my mom, Monopoly with my wife (Twinkle Khanna), hide-and-seek and lock-and-key with my daughter (Nitara) and I bake and cook with my son (Aarav),” laughed the Khiladi. But it was Varun’s question to Ajay Devgn that left everyone in splits, and the actor more than stumped. When asked for his reaction to Akshay in a sari on the Laxmmi Bomb poster, Devgn paused for a while and then let out an embarrassed laugh, “Come on, I can’t say he’s looking hot!”