Is he Hollywood royalty or is he a survivor? 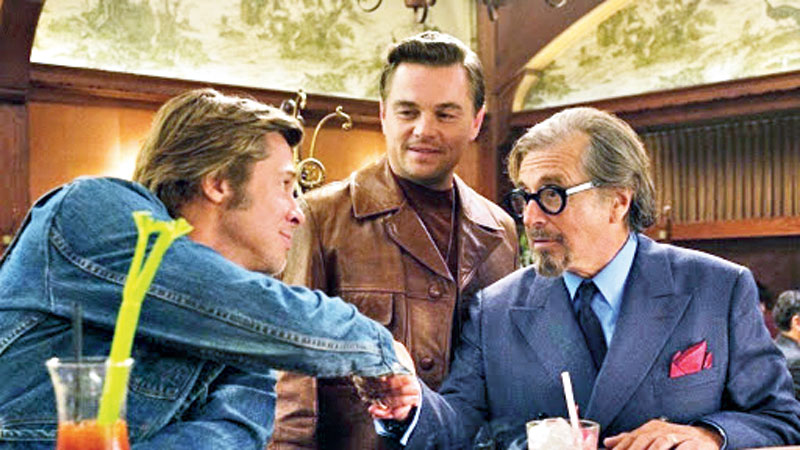 With Brad Pitt and Leonardo DiCaprio in Once Upon a Time in Hollywood
Still from the film
Andrew Billen/The Times, London   |   Published 27.02.20, 12:48 PM

Al Pacino enters the room at the Savoy hotly pursued by a Starbucks. He thanks its deliverer, one of many young people attending to the biggest star ever to be attracted to an Amazon Prime Video series. Hunched, but still such a powerful presence with his extravagant hair, black suit and jet scarf with white spots, Pacino takes an exploratory swig. There is something wrong. “This is not it. This is not a triple macchiato, and there’s sweet things in it,” he says.

The temperature of the room, if not the coffee, crashes. Pacino’s co-star on Amazon’s Hunters, a young actor named Logan Lerman, dares to offer condolences. The Hollywood legend, 80 this spring, looks up to take the measure of his audience in this small suite. “But here’s the beauty of it,” he says in a New Yorker’s deep rasp. “I don’t care. It’s coffee. Thank you.”

No interview, I think, has made such a fine start. In the next 40 minutes, Lerman repeatedly tells Pacino that he loves him. I already see why. Lerman’s initial declaration of amour is in answer to a question I ask him (partly because beforehand a PR begs me not to direct everything at Pacino) about meeting his co-star for the first time on the Hunters set. At 28, he is three years younger than Pacino was when he met Marlon Brando on the set of The Godfather in 1971, and Pacino, I say, is today’s Brando.

“I wasn’t scared. I was excited,” Lerman says. “I get to play and work with the actor I grew up idolising, but I was a little worried about what his personality would be like, you know?”

“I am too,” says Pacino. “No, no, with anybody, I mean. I’ve been fortunate to work with a lot of people and it varies — but his generosity and kindness, you know, his humility, just sets everyone at ease.”

Had Pacino been in awe of Brando? “Yes, I was. I grew up with him and he was one of the inspirations along with Jimmy Dean and Montgomery Clift and those American stars. He was only 47, but when he played The Godfather he was in a lot of trouble with the studios. He was a risk. He had made a lot of films that weren’t box office. He was kind of eccentric and a bit of a provocateur — a lot of one.

“I remember meeting him for the first time. We did it at Patsy’s, an Italian restaurant in Harlem, and everyone was there: Bob Duvall, Jimmy Caan, John Cazale, everybody. Diane Keaton [who would become Pacino’s girlfriend] was there. Francis [Ford Coppola, the film’s director] had us have dinner together, become a family, and what happened, which was very interesting, after about a half-hour, 45 minutes, he watched us and our behaviour turned somewhat into our characters. We just found ourselves resting in that place.”

Pacino played Michael Corleone, the youngest son of Brando’s American mafia don. He thinks he shared an intimacy with Brando because of their relationships with their fathers. Brando’s, a tyrant, beat him. Pacino’s had Alfredo at 18 and by 20 had left the family in East Harlem.

“I didn’t have a father growing up, or just for a very short time. I met him every now and then when I was grown up, but it was different. I mean, you have to grow up with someone. That’s why with my son [Anton, by Beverly D’Angelo, from whom he split two years after the birth] I said I had to be there. ‘It doesn’t matter what. I’m going to be there.’ That’s why I moved [from New York to Los Angeles].”

Often partnered, never married, Pacino won’t tell me whether, after a decade with the Argentine actress Lucila Polak, he is in a relationship now, although the press has taken to linking him with another actress, 40-year-old Meital Dohan. His greatest fidelity has been to his craft, practised originally and intermittently afterwards on stage, but serially, over about 60 films, on screen. In the past 12 months he has burnt brightly in a wonderfully funny cameo in Quentin Tarantino’s Once Upon a Time in Hollywood and as Jimmy Hoffa in Martin Scorsese’s The Irishman, a performance that earned him a nomination for best supporting actor at Oscars. Hunters, however, is his first big television series.

Set in New York in the 1970s, it is the story of Lerman’s character Jonah’s recruitment to a band of Nazi hunters after his grandmother’s murder. The hunters, who are presented as superheroes with different powers, seek not only to avenge Holocaust atrocities, but also to fight plans for an American Fourth Reich. They are led by Pacino as Meyer Offerman, a rich, Jewish and older Bruce Wayne, whose idea of revenge is strictly eye-for-an-eye. In the episodes beyond the two I have seen, there will be twists and ethical questions, I am sure, but this is the premise. At a press screening last week the audience yelped its approval when Pacino’s Meyer commanded his team to “get those Nazi c***s”. At its best, Pacino’s turn recalled the psychology of his fierce yet sympathetic Shylock in The Merchant of Venice. Shylock was, he once told an interviewer, not a villain but “a man wronged who goes too far”. Pacino likes my quote, but warns against drawing conclusions from one episode (or two in my case).

“There’s eight episodes where a lot of different things happen and it’s interestingly eclectic and sometimes there’s actual tongue-in-cheek stuff going on. Sometimes it’s horror, it’s funny, and then tragic beyond words. The way one navigates it is interesting to me as an actor.”

It is clear that Pacino prefers to talk about his work at a technical level. It is, however, the “eclectic” tone of Hunters that has already disturbed some, particularly Jewish audience members, who have seen it in preview. The show has tremendous spirit, but it’s the spirit of a comic book. I wonder whether, when they read the script, Pacino and Lerman asked themselves how far it was possible to treat the Holocaust and the Nazis in such a style (Jonah’s recasting of himself as an avenger after his guardian is killed is itself a comic book trope).

“At first I had trouble with that too, reading it,” Lerman replies. “There’s so many tones. How are we going to justify this? And then I realised we only use [the comic book style] to frame Jonah’s perspective and his imagination of what’s going on. It can never be used for the sequences that are portraying the actual horrors of the Holocaust.”

Episode one, however, has Jonah and Meyer play a game of chess with models of emaciated concentration camp inmates. A flashback to Auschwitz then shows actual prisoners as pieces of a human chess set, their moves dictated by an SS officer. When one captures another, the first slashes the other’s throat. If this flashy horror show had ever happened at Auschwitz we would have heard about it by now. How had Pacino felt playing that chess game? Did it disturb him, or was he just acting?

“I don’t know about that any more. I think as time goes on, the wear and tear on yourself as you continue to do this gets less and you project more, I think. Or at least, that’s where I’m at right now.”

Apart from the questions of taste that Hunters may prompt, there have been some objections about the casting of Pacino, whose antecedents are Sicilian, as a prominent Jew.

“That’s bullshit. As a Jewish person I can say that. Come on, anybody can play the role,” says Lerman.

“I sort of don’t think that way,” says Pacino, “because if you’re limited to your ethnicity, you’re going to have a very narrow . . . you’re only going to be playing ...”

The real transformations required of Pacino, of course, are to escape the weighty legacy of his extraordinary career and the immense fame it conferred on him in the 1970s, the era of the first two Godfather films, Serpico and Dog Day Afternoon. It is, apparently, an inheritable burden. He tells me that his elder daughter, Julie Marie, now a producer and writer, found it easier to act when she used her mother’s surname rather than her father’s. “I understood. Remember, before I became ‘Pacino’, I was Pacino, you know. I knew what it felt like to be a real person.”

One film he made directly addresses the issue of actor as icon. The Local Stigmatic is a dark comedy written by Heathcote Williams in the early 1960s. Pacino produced and acted in a film of it in the late 1980s, releasing it much later on DVD. He plays a down-at-heel Londoner, an actor manque perhaps, who walks round town with a friend, adopting aggressive poses and personas. In a pub they spot a professional actor who fascinates them, but whom they resent. Outside they beat him up.

Pacino becomes positively excited when I mention the project, telling me he briefly fell out with Williams over it. Williams wanted to call it simply ‘Fans’. Pacino insisted on The Local Stigmatic, with its connotations of adoration and crucifixion. Williams, he says, was worried about how graphic the assault would be in Pacino’s version (by this time, John Lennon had been killed by a disciple). “Heathcote once said the violence ‘leaks’. That is the word he used: leaks. I thought it specifically needed to be there. It sort of predicted the future.”

Pacino has been famous for so long, made so many classics, been nominated for so many Oscars (nine, actually, winning once for Scent of a Woman in 1992), I ask how he regards himself: as Hollywood royalty or a survivor? “I’ll always feel like a survivor because that’s sort of innate, but more and more, as time goes on, I am getting a little more comfortable with understanding the dialectic between what [his status] is and what I do. I’ve been getting a rush of it lately because I have had some success with these films.”

Good luck on Sunday, I say. We are speaking before the Oscars ceremony; he lost to Brad Pitt. “Thank you. Somebody mentioned to me, ‘How do you feel about all this attention you’re getting?’ I said, ‘Actually, it reminds me of something that happened to me a long time ago.’ I keep thinking, this happened before, something like it, akin to it. I said, ‘Oh, it was the Seventies.’ That’s what it was.”

Now that Scorsese has demonstrated through The Irishman that movies can reverse the ageing process, he could play anybody, I suppose. Surely, however, it is time for the Pacino King Lear.

“My hope is that I’ll get through this next phase of my life with all the stuff that’s going on and look at Lear again -—seriously thinking about making a film of it. I wouldn’t do it on stage. It’s not what I want to go on stage with, Lear, but in a film . . .”

It would be wonderful, and Lerman could be in it, I say, remembering to bring the serious young actor into our conversation. The publicist apologises. Cars are waiting. Lerman has a flight to catch. “Logan is always spoiling everything,” Pacino says, joking.

“I love you so much. I’ll see you in LA,” Pacino assures him, and they hug.

Like his coffee, there’s plenty of sweetness in him. Otherwise, Alfredo Pacino is exactly as ordered: deep, serious, authentic. That’s the beauty of it.