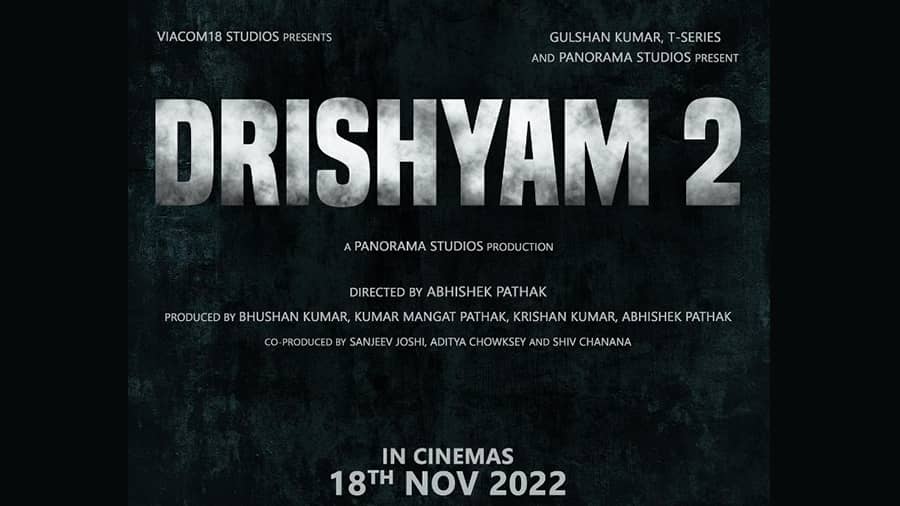 Actors Ajay Devgn, Akshaye Khanna and Tabu-starrer Drishyam 2 is set to release theatrically on November 18, the makers announced on Tuesday.

The plot continues six years after the events of the first movie. The story of the sequel centres on four family members whose lives turn upside down following an unfortunate incident that happens to the older daughter. While the plot of the Hindi remake is expected to remain the same as the Malayalam movie, small changes in the location and names will be made.

Ajay will be seen reprising his role of Vijay Salgoankar in the sequel. Tabu (as Meera M. Deshmukh), Shriya Saran (as Nandini Salgaonkar), Ishita Dutta (as Anju Salgaonkar), Mrunal Jadhav (as Anu Salgaonkar) and Rajat Kapoor (as Mahesh Deshmukh) are to return in Drishyam 2 as well. Akshaye is a new addition to the cast.

“Indian cinema’s much-celebrated character Vijay Salgaonkar is all set to take us on yet another thrilling journey this year on 18th November. Promising to take it notches higher in thrill, drama and excitement, this sequel will take Vijay and his family’s story beyond imagination,” a note from the makers read.

Ajay and Tabu also shared the poster of the film and announced the release date on their social media pages.

The announcement of the release comes as the shooting for the film wraps up in Hyderabad on Tuesday.

The first part of Hindi Drishyam was directed by late filmmaker Nishikant Kamat.