Advertisement
Home / Entertainment / A Star Is Born is big-feeling cinema

A Star Is Born is big-feeling cinema 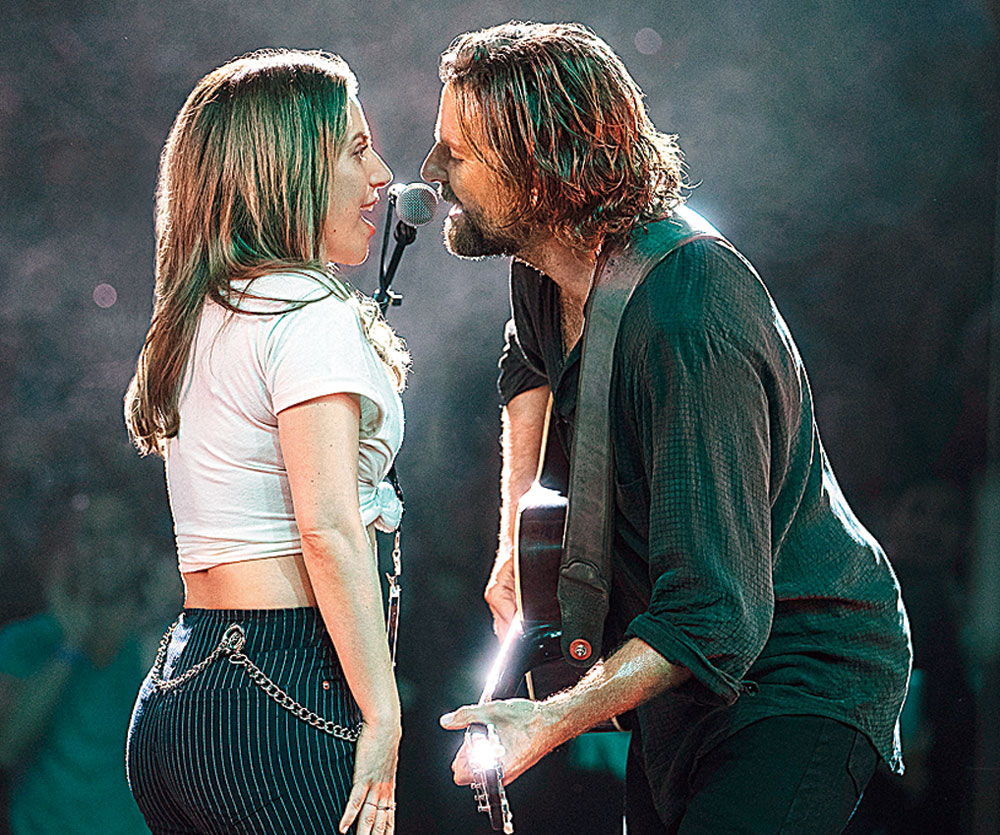 A Star Is Born is such a great Hollywood myth that it’s no wonder Hollywood keeps telling it. Whatever the era, the director or the headliners, it relates the story of two lovers on dramatically differing paths: a famous man who’s furiously racing to the bottom (Bradley Cooper in this movie) and a woman (Lady Gaga) who’s soaring to the top. This latest and fourth version is a gorgeous heartbreaker (bring tissues). Like its finest antecedents, it wrings tears from its romance and thrills from a steadfast belief in old-fashioned, big-feeling cinema. That it’s also a perverse fantasy about men, women, love and sacrifice makes it all the better.

Like the last iteration, the epically (empirically!) terrible 1976 remake with Barbra Streisand and Kris Kristofferson, the new one takes place in a contemporary music world that is by turns exciting, suffocating and crowded with dangers — ravenous fans, crushing performance demands, celebrity itself. This is the world that has helped create and come close to ruining Jackson Maine (Cooper), a country-rock musician who, when the movie opens, is performing obviously wasted, leaning and nearly falling into a boot-stomping song. He’s a beautiful ruin adrift on an ocean of booze, one he routinely spikes with pills.

A singer with a voice that can thunder, Ally Campana (Lady Gaga) becomes Jack’s safe harbour, taking on the roles of lover, partner, muse, ideal. That’s a heavy burden, but Ally is one of life’s chin-up survivors, with an errant mother and a loving, larger-than-life father, Lorenzo (a terrific Andrew Dice Clay), whose dreams cloud her own. Dad runs a limo business out of their Los Angeles home, where his male colleagues (Barry Shabaka Henley, among others) and their boisterous camaraderie fill the rooms, both warming and crowding them. Ally is accustomed to navigating around men larger than she is, elbowing past them to be seen and heard.

She and Jack first meet late one night in a Hollywood drag club where she sings after her waitress shift ends. Jack has just finished playing a concert and, after polishing off a bottle of booze, has stumbled into the club for more. There he watches Ally belt out the Edith Piaf standard La Vie en Rose, in a sheath and upsweep, her arched artificial brows adding quizzical punctuation to her face. In a swoon, he invites her out that night, and, as flirtation gives way to deeper feelings, they fall in love. He brings Ally onstage and then on tour, but she eventually goes solo, becoming a star whose ascent is shadowed by his decline.

Cooper, who also directed, does a lot right in this take on A Star Is Born, beginning with the casting of Lady Gaga, whose disarming, naturalistic presence is crucial to the movie’s force. A post-Madonna pop artiste known for her elaborate stagecraft and costumes, she has been stripped down here, her mask removed. You can see her skin, the flutter in her veins, which brings you close to her, and can make both the actress and her character feel touchingly vulnerable. This unmasking of Lady Gaga also makes Ally seem genuine, authentic, a quality that the movie champions and that serves as a kind of thematic first principle.

Soon after Jack and Ally meet, he peels off one of her fake brows — he’s flirting, but he’s also saying that he sees the real her and wants the world to as well. Playful yet unapologetically earnest, this scene inaugurates a seduction — of Ally, of us — that lasts the exhilarating first hour. Cooper understands the power of big-screen myths, including thunderstruck love and near-magical lucky breaks. He also understands his own star appeal (he gives himself plenty of heat-stoking close-ups), which dovetails with his role as director. When Ally and Jack look at each other, you’re watching two people fall in love, and it’s a contact high. You’re also watching a director guiding — creating — his star as life seeps into fiction.

Cooper’s smartest decision, other than casting Lady Gaga, is the absolute sincerity with which he’s taken on this material, in all its gorgeous, gaudy excess. He has refurbished the story some and added a bit too much psychological filler, but he has stayed true to its fundamental seriousness. Winking at this story would have been easy, but would have destroyed it. Instead, working from a script he wrote with Eric Roth and Will Fetters, Cooper has gone all in with big emotions and cascades of tears. (The movie owes a debt to, and nods at, the original 1937 film as well as the 1954 remake with a peerless Judy Garland.)

Part of what’s exciting about this A Star Is Born is that Cooper knows he’s telling one of the defining Hollywood stories and has given the movie the polish and scale it merits. He plays with intimacy and cinematic sweep, going in close when Ally and Jack are together so that the world falls away — a scene of them in a parking lot shows how conversation turns to courtship — only to then pull back so we can see the enormity of the world the lovers inhabit once Jack takes Ally on tour. And while the crowd seems little more than a surging blur the first time Jack plays, when Ally looks at the throng, she sees it and so do we.

The concert scenes of Jack and Ally performing are revved up but personal. (The production borrowed crowds from actual music festivals like Coachella, and their sheer size conveys the scope of Jack’s stardom.) Cooper sings pleasantly enough and throttles an electric guitar with persuasive fervour. He’s backed by the group Lukas Nelson & the Promise of the Real (Lukas’s dad is Willie Nelson). The music mixes standards with new songs, some written by Cooper, Lukas Nelson and Lady Gaga, whose supple, often electric singing can, at full throttle, express intensities of feeling far better than the dialogue.

Like many filmmakers, Cooper sometimes explains too much. It isn’t enough that Jack drinks; Cooper wants us to know why. So, he fleshes out Jack’s past, turning melodrama into therapy and robbing the character of mystery. One of the weakest scenes, a violent confrontation between Jack and his much-older brother, Bobby (Sam Elliott, whose deep drawl Cooper has borrowed), is an information dump. In one of the finest, Bobby just wordlessly drives away from Jack, and Elliott lets you see the ferocity of the brothers’ love - and their pain - in eyes that have begun to water and in a stone face that will shatter.

Cooper spends more time on the story’s male lead than previous iterations have, perhaps because he’s taken the role himself. The focus on Jack — he scrapes bottom, goes into recovery — somewhat weighs down the remainder of the movie, partly because too much of it is overly familiar. At times, Cooper seems to share Jack’s unease with Ally’s stardom, particularly after she connects with a manager (Rafi Gavron, oozing sleaze) and transforms from a soulful crooner into a writhing automaton with soulless beats and backup singers. Ally puts on the mask that Cooper has removed from Lady Gaga, suggesting that — unlike Jack’s — her art is less than pure.

Male self-aggrandisement is baked into the story’s foundation but not ruinously. Jack doesn’t just help turn Ally into a star, giving her the big break she needs. His trauma — she’s insecure, but he’s damaged — becomes a deep well that she draws from, allowing her to become a greater artist. In part, the story is as creaky as that of Pygmalion, the male sculptor who turns a beloved carving into a woman. Yet one of the pleasures of A Star Is Born in all its renditions is that it is also about a woman whose ambitions are equal to those of any man and who steadily rises as she weeps and sings toward fabulous self and sovereignty.