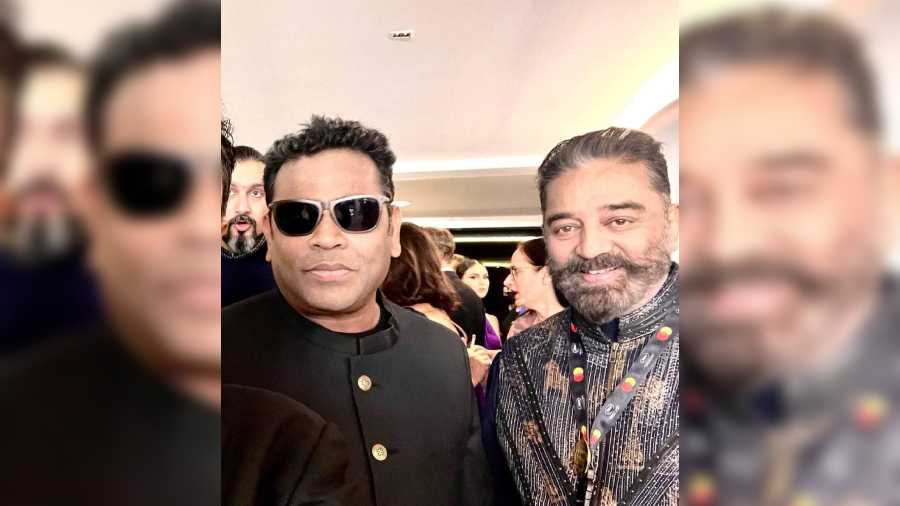 The opening night party of Marche du Film Festival de Cannes, co-hosted by country of honour India, unleashed late night fireworks that lit up the Cannes sky. In the course of the next week, several Indian films will be hoping for prospects just as bright and impactful.

Among the Indian films being showcased in the Cannes Film Market, is two-time Oscar-winning music composer A.R. Rahman's directorial debut Le Musk. The film is premiering in the market's XR programme.

Based on an idea from Rahman's wife Saira, the film is a sensory experience that employs haptics, aroma and motion.

"I am in the marketplace," the composer-turned-film director joked outside the India Pavilion in the festival's International Village. He indeed is. A Tamil film Iravin Nizhal for which he scored the music is also playing in the Cannes Film Market this year.

Le Musk, a 36-minute English-language drama that revolves around an heiress and musician who, two decades after being orphaned, goes in search of the men who changed her life. In her quest, she banks upon the memory of smell.

Because of the complex technology involved in its making, Le Musk took more than five years to come to fruition.

The cast of the film is led by French actress and singer Nora Arnezeder, who plays the protagonist.

The film, which has to be seen from specially designed chairs, was originally meant to be a 75-minute film but has been trimmed to half of that to sharpen its crucial sensory qualities.

Besides Rahman and the six films -- Rocketry: The Nambi Effect, Godavari, Alpha Beta Gamma, Boomba Ride, Dhuin, Tree Full of Parrots -- selected by the Information and Broadcasting Ministry to represent India in the ever-busy Marche du Film, several directors from the country, most of them first-timers, are in the Market with new films or projects.

The Bengali film Manikbabur Megh (The Man and the Cloud), directed by Abhinandan Banerjee, is scheduled to be screened on Saturday. It had its world premiere at the 2021 edition of the Tallinn Black Nights Film Festival, playing in the First Features Competition section.

Manikbabur Megh has been produced by the National Award-winning director Bauddhayan Mukherji, whose in-the-works Marichjhapi was in Cannes Cinefondation's Atelier in 2020, the year the festival had to be called off because of the Coronavirus pandemic.

An India-UK co-production, Pushan Kripalani's Goldfish, starring Deepti Naval, Kalki Koechlin and Rajit Kapur. will screen in the market on Friday. It has been produced by Splendid Films, headquartered in Atlanta. The company's President and CEO Amit Saxena is in Cannes.

Saxena, an information technology entrepreneur, is a newcomer to movie production.

"I am starting out in the business. Given the kind of film Goldfish is, I am hoping to make a strong beginning," he says.

The veteran Tamil actor and filmmaker Radhakrishnan Parthiban is unveiling his 16th directorial venture Iravin Nizhal (Shadow of the Night)", which has music by A.R. Rahman.

Iravin Nizhal is an audacious experiment, a 100-minute single-shot film with a non-linear narrative.

"It was a huge logistical challenge," says Parthiban. The film was shot on 50-plus sets spread over 64 acres. It took us 23 takes to pull it off.

Ridham Janve's Indo-UK co-production film Ashwamedh is one of five films from NFDC Film Bazaar's 2021 online edition that is being pitched in the Cannes Film Market.

Janve, a National Institute of Design graduate who debuted with the critically acclaimed The Gold-Laden Sheep and the Sacred Mountain, is at the festival in person.