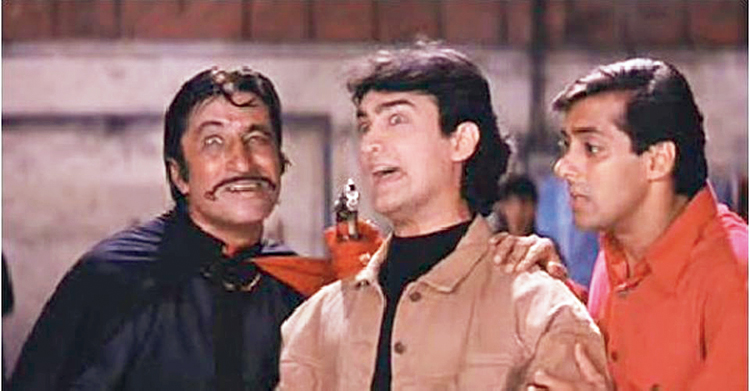 That’s Amar for you, a youth in newly liberalised India. He’s explaining to his dad, the owner of a roadside barber shop, why he took Rs 100 from the cashbox for a haircut at the salon of a five-star hotel. The dad shouts that he happens to make a 100 bucks after no less than 20 haircuts. The son, who loves the good life and wants to be rich, doesn’t care. He wants to marry an heiress and live the good life.

Amar and Prem are two of Hindi films’ unlikeliest heroes, they love money, they like to save their own skin, and they’d any day choose witticisms over work. What follows is a genuine laugh riot with the duo’s capers involving a fake heiress (Raveena Tandon), a real one (Karisma Kapoor), a millionaire and his identical evil twin (Paresh Rawal), a bunch of hilarious goons, cops, dads and sidekicks (Shakti Kapoor, Viju Khote, Javed Khan, Harish Patel, Tiku Talsania, Deven Verma, Jagdeep…). And in a film with two Khans (three, if you count a big nod to Shah Rukh in Amar’s dream sequence with Juhi Chawla, playing herself), a rare one where dialogues (Santoshi hits it out of the park) are the real superstar, so crackling that they make one crack up even a quarter of a century later.

In a decade of risqué slapstick and cringe-worthy double entendre that passed for humour, AAA tickled India’s funny bone with intelligent situational comedy, likeable rogues and epic lines like Galti se mistake ho gaya. The movie had nice enough songs — composer Tushar Bhatia’s homage to legend O.P. Nayyar — but it’s the laughs that matter. Famously, AAA tanked on release, thanks to badly managed publicity after a prolonged three years in the making. People woke up to its charms on television. A whole generation laughed along with Amar, Prem, Teja and Crime Master Gogo. Turns out, they’re still laughing.