Advertisement
Home / Entertainment / A final ode to the Game of Thrones

A final ode to the Game of Thrones 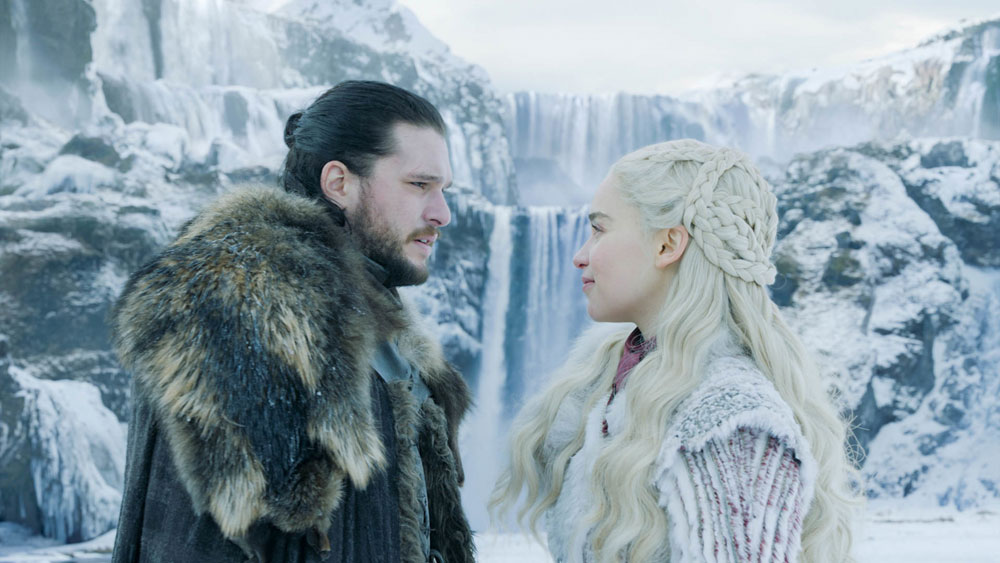 As the final season plays out, will Game of Thrones ever really be over?

To see is to believe, even if the eyes gape, the mind boggles, and the heart heaves, in despairing disbelief. I see the dismembered head of an honest man, the slit throats of less honest ones, and the thousands of mangled victims of sword, ice and fire. I gaze in awe at the incinerating dragons sprawling majestically over a vanquished civilisation. I observe the kings — mad, lecherous, sadistic and shy; study the queens — of ambition, alliance and ashes. I witness a land of conscientious killers and amoral advisers, of wise spiders and whore-mongering, drunken philosophers; a kingdom testament to the power of hands and the spirit of the handless. I notice a bastard-turned-commander-turned-king-turned-lover awaiting his ultimate identity. I stare at a previously invincible villain shattered to shards. I stand in the midst of a world whose motivations are more mysterious than its magic, a realm of unrivalled fantasy, a theatre where I don’t just watch the Game of Thrones unravel, but play it, too.

Back in the middle of 2018, I was one of those rare souls on the planet who had never seen a single episode of HBO’s path-breaking TV show Game of Thrones, based on the novels (A Song of Ice and Fire) of George R.R. Martin. Every time I resolved to start the series (primarily to join the endless conversations around me), I heard an inner voice saying, “Not today”. Finally, out of sheer boredom on an August evening, I decided to get rid of my peculiar reluctance and played the first episode on my laptop.

Some 60 minutes later, as Bran Stark fell off the edge, I fell in love with the show. As a fan of television, I have never been the same since. To begin with, the show made me dispense with my intransigence of never binge-watching serials (I felt it dilutes authentic audience response) and finish the seasons almost as swiftly as Daenerys Targaryen and her dragons finished King’s Landing.

Over the last nine months or so, I have watched the entire series a couple of times over (I just began my third run), started reading the books, searched and consumed just about every fan theory in existence (most of which are, satisfyingly, inaccurate), made up my own theories (even more inaccurate), bought bags of GoT merchandise, dined in a GoT-themed restaurant, listened to hours of episode breakdowns and previews as well as countless interviews of cast members, sidestepped spoilers, catalogued tons of GoT memes, and still some more. Yes, the things we do for love!

One of my favourite aspects about Game of Thrones is the arc of certain characters and how they have altered over the seasons. There is no better example of a brilliantly-evolved character than Theon Greyjoy. I started out by consigning this apparent sidekick (taken as a ward by the Starks) to insignificance; my anger boiled over when he turned on the Starks to capture Winterfell. I sympathised with Theon when the devious Ramsay Bolton tortured and emasculated him, feeding off his insecurities (and possibly other things; sausage anyone?). But in the third episode of the final season, having alternately loathed and pitied him before, there I was, rooting for Theon, as he charged with all his valour at the Night King, defiantly meeting his demise. In spite of all his flaws and sins, Theon died a “good man”, a perfectly sketched character.

Theon’s portrayal in the show is in keeping with the general formula of characterisation by the writers —black-and-white people are scarce; the in-between ambivalence of grey, and a mixture of good and bad, is what defines most in Westeros.

The revolting king-slayer in Jaime Lannister from the initial seasons gradually becomes a fan-favourite, losing a hand and gaining plenty of integrity along the way. Daenerys, the infallible mother of dragons, turns into a fatalistic tyrant in the final stages of the show, while Cersei Lannister, the incorrigible queen responsible for some of the vilest atrocities, bids farewell in the most recent episode as a weeping mother and tragic lover, embracing Jaime (and the debris) in the humanising ruins of the Red Keep.

Then there is the dreamy-eyed, romantically fragile Sansa Stark of Season One who has matured remarkably and painfully over time, constantly adapting herself to culminate in arguably the smartest character left in the show (at least her sister Arya thinks so). Sansa’s evolution also underlines the most enduring philosophy of Game of Thrones — to thrive you must not only be tough, but flexible, too. Learning from your enemies is often the best way to overcome them.

In my opinion, the biggest strength of Game of Thrones is its ability to manipulate the emotions of its viewers. This manipulation comes about through a steady sprinkling of shocks, a penchant for the glorious, a still greater penchant for the ghastly, and the uniquely assimilated GoT recipe of coalescing loose ends to design an emotional roller coaster. Like most fans of the show, I looked on, aghast, when Ned Stark was betrayed and beheaded towards the end of the first season. My guts wrenched in agony as Robb and Catelyn Stark suffered the cruellest of fates in the iconic Red Wedding in the third season. In contrast, I felt a discomforting joy when (in Season Four Episode Two) the wicked Joffrey was poisoned to death (that face!). Later on in the same season there was a pronounced pathos when Tyrion Lannister, standing at life’s crossroads with a crossbow, shot an arrow right into the heart of his unsuspecting father Tywin. My heart beamed with pride when Sansa gave the duplicitous Petyr Baelish (not-so-fondly called Littlefinger) a taste of his own medicine in Season Seven, right before Arya cut him open.

But the pinnacle of the Game of Thrones experience, for me, came in the latter half of Season Six. Over the course of a single night (when I was on a watching spree), I went from a mixture of relief and ecstasy at Jon Snow’s victory in the Battle of the Bastards to a profoundly guilty pleasure at the sight of Ramsay Bolton being devoured by his own hounds, from admiring and berating Cersei’s ingenuity (not quite in equal measure, the admiration was more!) in blowing up the Sept of Baelor to the unadulterated satisfaction of Arya avenging her family by dispatching the spineless Walder Frey. Within the space of a few hours, I had travelled through the entire length of the visceral spectrum, my stoppages at each of the feelings being short but significant, with each emotion seamlessly giving way to the other in the course of a masterful orchestration of sensitivity.

The eighth and final season of Game of Thrones has certainly been the most polarising one thus far. Several loyalists of the show have been disappointed at the breakneck pace, which they feel has sacrificed depth (and potentially realism) at the altar of spectacle. Personally, I think this has been a riveting season, even without scaling some of the former heights.

The first two episodes provided the perfect prelude to the Battle of Winterfell, smartly stitching various strands into a coherent and relatable whole. The much-awaited face-off between the living and the dead was ambiguous in some parts (largely due to the lighting) and strategically baffling in others, and yet the overall experience was a magnificent attempt at a Herculean feat. Arya killing the Night King had an el ement of poetic foreshadowing (along with a sense of instant surprise), but it was the way in which Miguel Sapochnik (GoT’s battle veteran) directed proceedings from a multiplicity of perspectives that I found most impressive. Many fans were outraged at how swiftly (and easily) the Night King was eliminated, and with them, I partly concur. Having said that, Game of Thrones (for me) has always been more about the politics of Westeros than the threat beyond the wall, a theme once again reiterated in the show’s choice to prioritise the inhumanity among humans over the terror of ice zombies.

The next big and the final battle at King’s Landing in Episode Five had its own devastating beauty — Daenerys’s mad queen streak isn’t my preferred plot twist, and in any case it ought to have been handled better, and perhaps, slower — but given the magnitude of the ultimate showdown, David Benioff and D.B. Weiss (the producers) did a commendable job, dexterously inserting a host of OMG moments into a brutal narrative that rings true in reflecting the worst of human tendencies, as well as the most poignant ones.

Season Eight may have been guilty of giving into fan cravings (the short-lived Jaime-Brienne romance), lazy and sometimes irresponsible exoticism (in the depiction of coloured characters), logical loopholes (how did the scorpions miss their mark in Episode Five after nailing Rhaegal with consummate ease in the previous one?), and most certainly of making injudicious use of the CGI budget (the least Ghost deserved was a pat from Jon). And yet, in spite of the shortcomings, the last instalment in this epic journey still has us all guessing, waiting with bated breath for the grand finale.

I will not hazard a prediction as to who sits on the Iron Throne (if anyone sits at all), but I will certainly hazard a trust in the show makers’ vision, that they will end the most popular television series in history on a fitting note. The perils of scripting a narrative this complex requires maintaining a precarious poise between being a plotter and a pantser, all the while keeping the fans happy and the critics hooked. While it remains impossible to satisfy every viewer, GoT’s perennial habit of keeping everyone engaged should not go amiss when the show airs one final time.

It is difficult for me to imagine exactly what I will undergo when the credits roll for Season Eight Episode Six, and it all comes to an end. While spin-offs and prequels are already on the cards, I doubt if they, or anything else, can ever fill the void that the conclusion of Game of Thrones is about to throw open in my life. Some shows transcend the limits of the screen to seep into your being; they become a part of you just as you become a part of their world. As the curtains come down on a world that I never wanted to leave, the thing that I will cherish most about Game of Thrones (beyond the punch-lines, the fighting, and the drama) is the fundamental lesson it has taught me, a lesson that I feel resonates with reality: when we play the game of life, we don’t always win or die; sometimes we merely survive — different from what we were yet hopeful of what we might be, enriched by love and chastened by fear, ready to play another day.