A chat with the cast of Ei Ami Renu

Sohini Sarkar, Gaurav Chakrabarty and Alivia Sarkar on the film Ei Ami Renu, the various hues of love and a Samaresh Majumdar connect 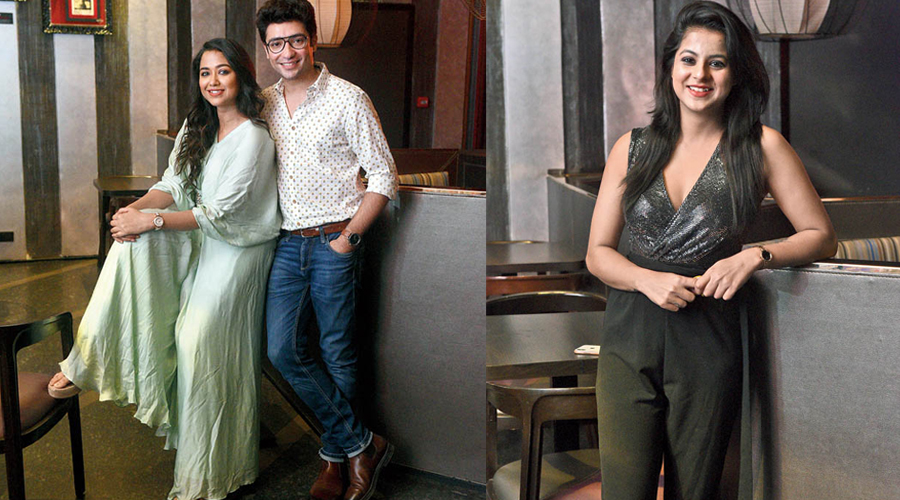 Back in the Calcutta of yesteryears, love stories blossomed organically sans the trappings of the Internet, virtual media and mobile phones. With Ei Ami Renu (running in theatres now), based on Samaresh Majumdar’s novel of the same name, the audience will be taken back in time to one such story that depicts the nuances and complexities of love and relationships, set in the 1980s-’90s. The Telegraph chats with Sohini Sarkar, Gaurav Chakrabarty and Alivia Sarkar at Hard Rock Cafe.

Tell us about your characters in Ei Ami Renu...

Sohini: Renu is a university student. She is very lovable but she has some issues about love and relationships as well, which make her believe that she doesn’t deserve the man she loves. Caught in this dilemma, she moves in and out of the relationship again and again. Finally, she writes a letter and she gets married. The strength of the story lies in its relatability — people of our generation, all of us will be able to relate to the story.

Gaurav: My character’s name is Sumit. Initially, in the first half of the film, he has come from the outskirts of the city to study at Calcutta University, and there, he meets Renu. Sumit and Renu fall in love with each other but due to circumstances, she is unable to get married to him. That’s where the first half of the film ends. And then she gets married to Soham’s character whose name is Boren. And then in the second half, my character is working in an insurance firm and he comes back into Renu’s life. A lot of time has passed, but he is the kind of person who did not look at any other woman since Renu left and he is still single. And, Renu is in a very unhappy relationship. And, that is when he comes back into her life and what happens from there onwards is the story.

Alivia: I play the character of Jhuma in the film. It’s a gang of four college friends — Jhuma, Sumit, Ashok, and Renu. Jhuma and Ashok are very good friends with Sudip and Renu, you know, the kind of tender, intimate bonding and friendships that one forms in college life. But the four of them go through many crises as well, heartbreaks and healing. The film is all about love — different patterns and shades of love.

Was there any preparation as such for your roles?

Sohini: I had read the novel before. The director (Saumen Sur) and the script are both really good so that helped. All the same, every actor has his or her distinct preparation for every role, which is difficult to explain really.

Gaurav: The preparation involved reading the book and knowing about the novel that Samaresh Majumdar has written. As an actor, I didn’t have to prepare too much. I just had to go back to my childhood — that was the time when there was no Internet or cellphones. Communication was entirely dependent on a few landline phones and letters. And that is the time which I have seen and grown up in. So, I did not have to do too much research about going back to the 1980s. It felt wonderful to be back in the 1980s through this film.

Alivia: I listened to a lot of early ’80s and early ’90s music because music helps me connect with any emotional situation very easily. We have tried to portray the essence and ambience of that period through our performances. 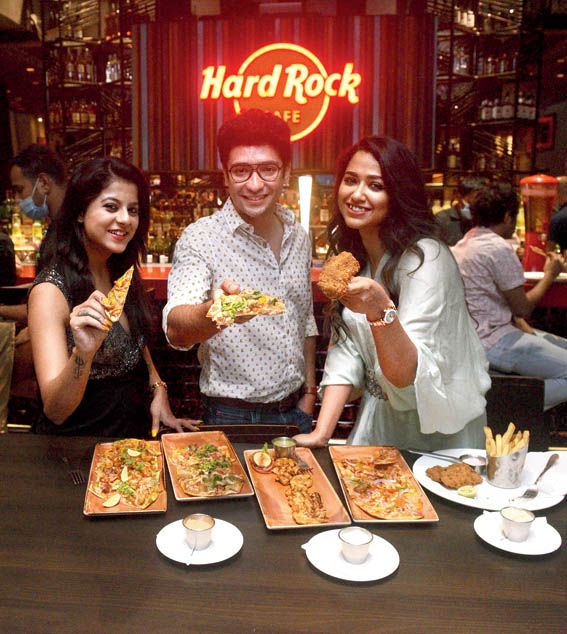 The trio tried out dishes from HRC’s new menu at Hard Rock Cafe. The new menu features popular dishes like Fish & Chips, Grilled Garden Flatbread Veg, Gun Powder Chicken Tikka, Chicken Fajita Flatbread and Chicken Tikka Flatbread. “I have been to Hard Rock Cafe before during the promotions of Crisscross and even otherwise with friends. I like the ambience here,” said Sohini.

Gaurav: With regards to this film, I was working with friends. Sohini did her first film with me and we did a television serial together way back in 2011. So, it’s been a 10-year friendship. And we had a whale of a time while shooting. And of course, Soham also, I have worked with him before and we have become fast friends since we worked in Bhootchakra Pvt. Ltd. Then there’s Kaushik Ganguly who is sort of an acting teacher to me. I started my career with him, my first feature film Rang Milanti was with him. It was an opportunity of a lifetime to share screen space with an actor of his calibre.

Sohini: Gaurav is an old friend. I have worked with him before in television and cinema. I worked with Alivia for the first time — she’s a nice and sweet person. I worked for the first time with Sohamda — and it was a good experience. We had been planning to work together for quite some time now and finally, things fell into place for us to work together in this film.

Alivia: It was awesome! The sets were beautifully put together to depict the palpable look and feel of those bygone days so while shooting, it was a different feeling for me. We also had scenes at the Coffee House, so the old-world appeal of that was there as well. It was my first time working with most of them. Everyone was so friendly. My co-stars supported me throughout and ensured that I was in my comfort zone. I learned a lot from the experience.

Have you read any other novel by Samaresh Majumdar? Is the film a faithful adaptation of the novel?

Sohini: Among his works, Kaalbela is a novel I like a lot. When a novel is adapted into cinema, it takes a different life of its own, so that was there for this film as well.

Gaurav: When I was approached for this film, I had not read the novel. But then Samaresh Majumdar has a big part to play in my life because my father’s first television serial Tero Parbon, which came out in the year 1987, was a major hit and gave my father huge recognition in the character of Gora and that serial was based on a story by Samaresh Majumdar. While this serial was going on, I was born and my father’s name in the serial was Gaurav, which is how I came to be called Gaurav. So, in a way, my name has a lot to do with Samaresh Majumdar.

We have tried to remain as faithful as possible because this novel is very famous. And lots of people have expressed their love for the book to me on social media saying that they were looking forward to watching the film. So there’s a huge responsibility there. I hope we can live up to the expectations.

What would be the best part about the film? And do you think the idea of love back in the 1980s-’90s was markedly different from today?

Gaurav: First, I would like to point out that there are very few love stories which are made nowadays. I am glad to be working on a love story after a very long time. Second, going back to the 1980s and 1990s was very nostalgic because that is the time I was born, before we had cellular phones and the Internet. I believe that was a very tranquil time — you were not expected to be available all the time on cellphones. So it was a very different time and I miss it today. Through this film, I could go back to that period, which I enjoyed. The early ’90s was a wonderful time to grow up in. So I think the best part about watching this film is going to be the time travel bit because the audience will be taken back in time to the 1980s while watching it. There’s an automatic nostalgia that comes in. I think that is the USP of Ei Ami Renu.

Sohini: Through the film, we could go back in time, which is a great thing and I think the audience too will enjoy that immersive visual experience. Back in the 1980s, there were no mobile phones or Internet, it was a different world altogether. People who belong to the older generation, communicated and kept in touch with each other through letters, and letter-writing was the prevalent form of communication. Love itself was very different from today; it wasn’t so much physical as it was psychological or ideal.

Alivia: I love the album of the film, the songs! Every song has its charm.