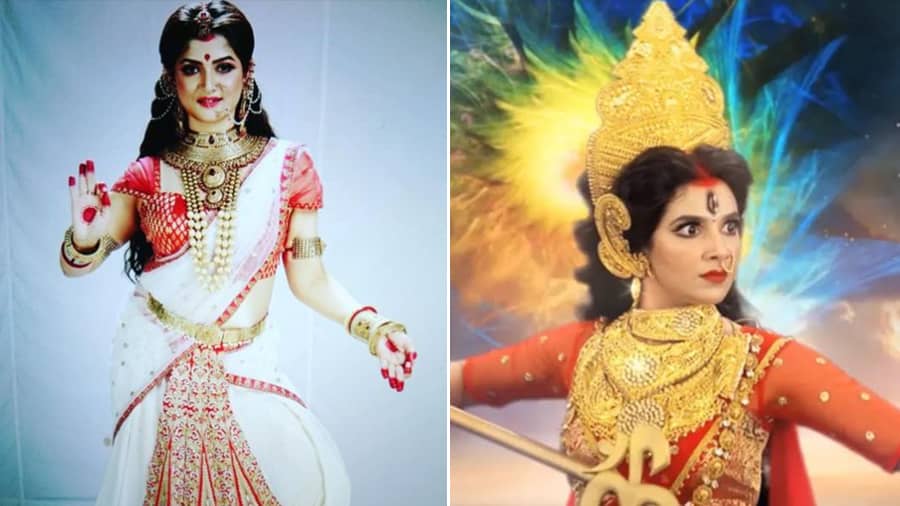 The special thing about Mahalaya morning is turning on the radio for Mahisasurmardini, Birendra Krishna Bhadra’s iconic invocation of Devi Durga. Back in the 1990s, when the radio began to wane because of the rise of television, the celebratory incantation made its way to the small screen for a dramatic retelling of the goddess slaying the demon.

Doordarshan introduced the concept of Mahisasurmardini in the dance drama format and transformed it into a visual treat. Of course, now, it’s a different scenario with TV channels competing to grab the audience’s attention with their Mahalaya special show.

Apart from a fresh take on the legend of Durga, one of the major factors that determines which channel wins the TRP race on Mahalaya morning is the face of the show. Casting a popular actress as Durga wins half the battle. Over the years, several actresses from Bengal and beyond have played Devi Durga on the small screen. Here are our favourite six.

In millennial lingo, she is the OG Durga. A trained classical dancer, Sanjukta Banerjee played Durga for the first time in Doordarshan’s Mahalaya programme in 1994. Her portrayal of the goddess made her an audience favourite, and many other actresses have taken on the mantle after her. Her last stint as the goddess on television was in 2013, yet audiences still swear by her performances that were marked by grace and vigour.

The Bollywood ‘Dream girl’ has charmed the audiences over the years with her grace, beauty, expressions and skillful dancing. Also a trained classical dancer, Hema Malini has performed numerous stage shows of her ballet, Durga. In 1995, she was roped in by Doordarshan to portray Durga for the Mahalaya programme.

Indrani Halder portrayed Durga in Doordarshan’s Mahalaya programme in 2003. Before that, Indrani had also played the role of divine feminine for the show Maa Shakti on Star Plus in 2002. Be it her looks or her dancing prowess, the national-award winning actress made a huge impact as the goddess.

Among the new generation of Bengal’s actresses, Koel Mallick exuded an old world charm as Devi Durga. Her performance for Colors Bangla on Mahalaya in 2021 was marked by the grandeur and vigour needed for this portrayal.

The doe-eyed actress has been a favourite of many TV channels in the role of Durga for their Mahalaya shows. Srabanti has performed the role for various channels over the years, with her last stint being in 2020.

The popular TV actress is best known for portraying the title roles in the hit daily soaps Durga and Behula. She has portrayed the goddess and her various forms on screen several times, and remains one of the most popular faces as Durga on television.

Subhashree is playing Durga in Zee Bangla’s Mahalaya show this year, but this is not her first. Her tall stature and cherubic face made her a fan favourite in the role of the demon-slaying goddess.