Advertisement
Home / Entertainment / 'TV is still looked down upon, like it's the lesser cousin of Bollywood' — Nakuul Mehta

'TV is still looked down upon, like it's the lesser cousin of Bollywood' — Nakuul Mehta

Nakuul Mehta is enjoying a new high. His popular STAR Plus show Ishqbaaaz recently completed 600 episodes. The 35-year-old light-eyed actor with an infectious smile has won over many hearts with his good looks and charm. A t2 chat. 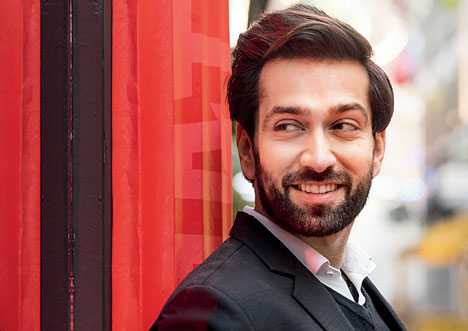 Nakuul Mehta is enjoying a new high. His popular STAR Plus show Ishqbaaaz recently completed 600 episodes. The 35-year-old light-eyed actor with an infectious smile has won over many hearts with his good looks and charm. A t2 chat.

Ishqbaaaz has just completed 600 episodes. That must be quite a high...

Post-2015, there hasn’t been any other show that has run this long. A one-year run on TV these days means you’re a legit hit show. If you run for two years, it means you’re accepted.

Six months in, Ishqbaaaz became so popular that we did a spin-off called Dil Boley Oberoi that ran parallel to the main show. Ishqbaaaz has got dubbed in multiple languages and has reached Indonesia, Middle East, Morocco and even countries like Kosovo. It has an official remake in Kannada. It’s gone beyond what I had imagined.

Your character Shivaay Oberoi is a hit with women. How do you handle so much fan attention?

There’s not much to handle. I get to do what I love. I’m lucky that people accept and love it. I’m doing my job… but people have taken a fancy to it, which for an artiste is a huge deal.

When Ishqbaaaz took off, two sweet girls, one from Sri Lanka and the other from California, bought a star in the constellation and named it after me on my birthday. There was an official certificate.

Any fan story that’s turned into a scary experience?

I’ve got chased by fans. People know where you are and they find you out. It’s sweet in a way but sometimes it gets freaky. Once we were in London and my wife (singer Jankee Parekh) kept getting messages, emails and tweets from three girls saying they wanted to meet me. Because of our Instagram stories, they knew exactly where we were. These three girls ended up following us from breakfast to  dinner.

I like to meet people and I appreciate the fact that they take out so much time to do so. There are some who watch my show eight times over, which is basically 600 episodes multiplied by eight. And these are not just young girls. Recently, a gentleman from Bangalore reached out and told me his mother is recently turning 60. They don’t really watch Hindi shows there on TV but somehow his mother started watching my show and watched it eight times over!

But does this ever lead to any insecurities from Jankee’s side?

We have been high-school sweethearts. She knows me since I used to do only ads. My extent of recognition was only till my college (laughs). We saw our dreams together — she wanted to be a singer and I wanted to be an actor. She enjoys this.

Working full-time on a popular TV show must be hectic. How do you maintain a work-life balance?

There is no balance. You need to make huge sacrifices. I’m glad I got married before I got into TV,  otherwise it would have been impossible to maintain a sane relationship. Luckily, I have someone to go home to, so it doesn’t take the effort to get dressed and go meet someone after work. That part has worked out great.

Shah Rukh Khan and Irrfan Khan made the transition from TV to movies. Any plans of moving to Bollywood?

Although Shah Rukh and Irrfan made inroads, the real inroads are happening now with a Sushant (Singh Rajput), a Mouni (Roy) or an Ayushmann (Khurrana). It’s changing, but I think it will still take three or five years more for us. In the West, a huge TV star is as big as a movie star. Anybody from the cast of Game of Thrones will be considered an A-list celebrity. In India, TV is still looked down upon, like it’s the lesser cousin of Bollywood.

How do you handle trolling on social media?

I look at it very compassionately. It’s the release that they need because they don’t get it in their real life. They feel the need to hide behind a fake picture… sometimes it’s my picture! (Laughs) Everyone wants to say something or outrage. The best way to answer them is actually by not giving them attention. I read them but I don’t react any more.
I think I want to use social media to create value, to be able to follow people who can add something to my life, make me a better artiste, a better person.

A message for your fans..

A lot of my audience is 16 to 25 years old. It’s sad that the younger generation is growing up entirely in the time of social media. I want them to know that there’s a life beyond social media. I want them to choose their role models wisely and not let TV, movies, Instagram or Twitter be their standard of ‘this is someone I admire’. When I was their age, I was spending time playing a sport or learning an instrument and not commenting on Instagram and waiting for the celebrity to reply.

You’re a travel junkie. Which was the last place you visited?

In the last three months I’ve been to Boston, Sri Lanka and Japan. Don’t ask me how I did it while doing a television show! (Laughs) I’m very clear in my life that I need to travel.

I’m work-crazy but I take three to four days off every month and just go away.

I’m a planner. I’m not the backpacker anymore. I have to be considerate to the better half. You’re working so hard during the year, you want to give yourself that luxury of travelling well. We went to Japan in April and I researched every single day two months prior to the trip. I got in touch with travel bloggers in India and around the world though social media. I don’t prefer living in hotels… I rely on Airbnb. That’s how you meet more locals. I love to meet new people.

I follow tennis closely. Cricket is my favourite. I have played cricket till college and I am an actor only because I wasn’t good enough to be a professional sportsperson (laughs).

Kohli has been captain for only two-three years, Dhoni is by far one of the best captains. I am currently reading  The Dhoni Touch: Unravelling the Enigma That Is Mahendra Singh Dhoni by Bharat Sundaresan. The more I read it, the more I’m in awe of the guy. I can’t focus on work because between shots I’m only reading this book.

If you had to recommend a book, what would it be?

Open by Andre Agassi. It’s one of the best books you’ll ever read in sports.

What’s the first thing you do when you wake up in the morning?

I brush my teeth like most people! (Laughs) Actually, I chant in the morning. I am a practising Buddhist and a follower of Nichiren Daishonin Buddhism. That’s how I like an ideal day to start, unless I am really late.

What do you have for breakfast?

It used to always be a three-egg white omelette with mushroom and spinach, but it’s changed. I’ve turned vegan. So now I have a smoothie that has almond milk, spinach, dates, plant protein and some glutamine.

Only to save my life! I can make eggs, sandwiches… I can order stuff well!

I love food. My travels also revolve around food. I decide where I am going to have lunch and dinner at and then plan things around that.

I love Mexican but you don’t get good Mexican cuisine in Mumbai at all. My favourite comfort food will always be rajma chawal cooked by my mother.

If we open your wallet, what would we find?

I don’t even look at my wallet. It’s mostly with my driver. On most days, I wake up and go to the studio. While returning at night, everything is mostly shut. There are times when my driver isn’t there and I have to pick up stuff on the way for the wife… so the fruitwallah, the andawallah, the bhajiwallah, they all know me (laughs).

When I see people not having respect for people who work under them, or for them. People in the hospitality industry are mistreated because you feel that you have paid them so they are supposed to service you. A lot of us have this sense of privilege and that gets to me.

Who is your closest friend in the industry?

Drashti Dhami. Drashti and I used to go to Shiamak Davar’s dance class when we were 16. I’ve known her before she became a huge TV star.

If you could time travel, which era/city would you go to?

My forefathers are from Rajasthan and are part of the Rajputana clan. Recently, my father (Pratap Singh Mehta) wrote a coffee table book Guns and Glories on the entire lineage — from Prithviraj Chauhan to the current generation. Now that I’ve read it, I wish I could be there during those times. I’d like to go back to the 1800s.

Japan: It’s the best country we have been to. It has the nicest, kindest and friendliest people.

London: New York used to be my favourite, but I’ve travelled a fair bit to London and it’s beautiful, inclusive and has a warm vibe.

Prague: It’s beautiful because of its communist past… you can still see that in shops, restaurants, its history....

Sri Lanka: Sri Lanka is a better Goa for me — cleaner beaches, people are friendly, the food is fabulous and it’s affordable.

Udaipur: I love going back to my hometown. I have begun to appreciate the city far more, now that I am a tourist there.

Ushnota Paul
I am a Nakuul Mehta fan because... Tell t2@abp.in